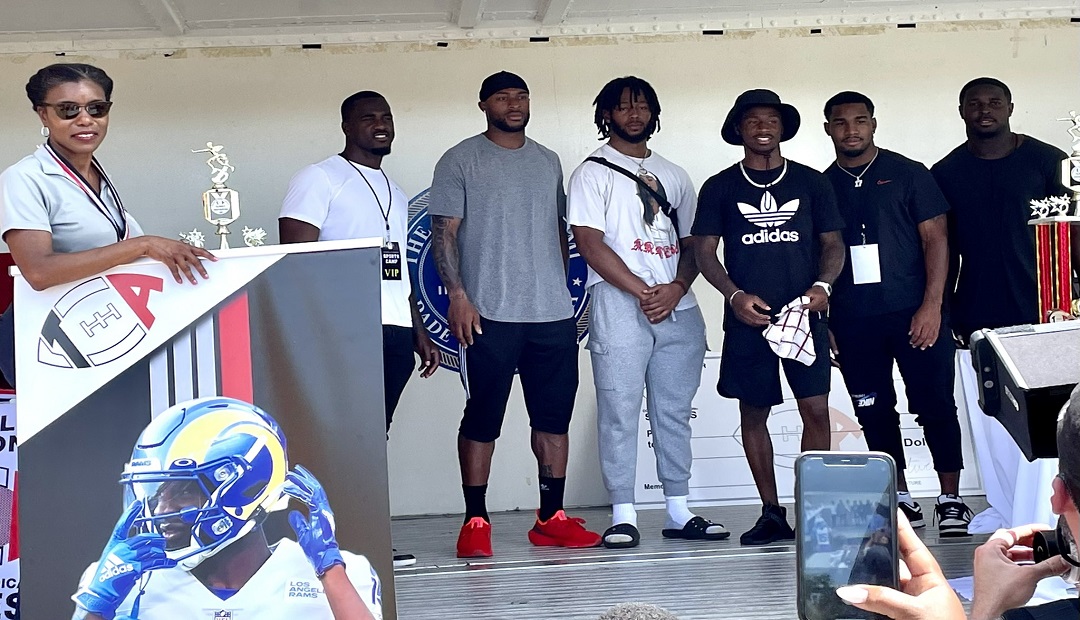 MIAMI – It was a homecoming that so many will remember for a long time.

Tutu Atwell, who starred at Liberty City Optimist. Miami Northwestern, University of Louisville and the world champion Los Angeles Rams returned home Saturday at Charles Hadley Park, where he grew up and got ready for his athletic career.

Welcoming youngsters for a sports camp as well as several south Florida high school football teams for an afternoon 7-on-7, it was a win/win all the way around.

As youngsters competed in all sports and ate some great foods that vendors prepared, a rather large crowd came out to support one of their own.

THE STARS WERE OUT

With many area dignitaries on hand along with several sponsors, it was a day of celebration for the Tutu Atwell Junior Foundation, and by the end of the day-long event – children, adults and fans of all ages left with a great feeling.

“Plenty of hard work went into this,” Atwell said. “I have always been the kind of person who wanted to give back to the community who made it possible to get where I am today.”

Atwell’s foundation included so many residents of Liberty City and throughout south Florida, who helped put on a tremendous show.

Among those on hand were Dwight Jackson. One of the biggest supporters of youth athletics and community philanthropy, Jackson, a longtime coach at Miami Central and 1976 Miami Beach High graduate always steps up for the community – and Saturday was certainly no exception.

Along with Jackson was Commissioner Keon Hardemon, who has been huge to the community and is one of the major supporters in the City of Miami.

When ever an NFL players hosts and event, athletes cannot be far behind to help support.

When the 7-on-7 rolled around, all the attention was on the Liberty City Optimist football field.

With first year head coach Jube Joseph leading the way, the Miami Central Rockets came away with the team title – and a $5,000 first place prize that will be awarded to the school to help in running a program that has won three consecutive state titles and eight overall.

Miami Edison Is Back Again And Ready To Contend