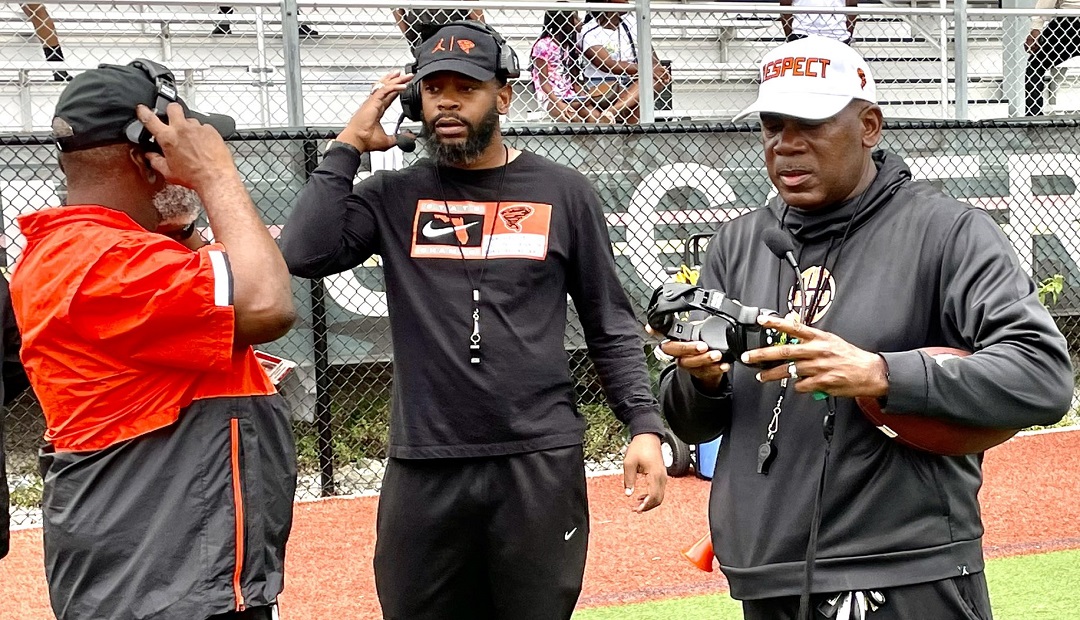 It happens every year. Coaches taking new positions across south Florida, and Miami-Dade and Broward Counties are once again in the spotlight.

While everyone knows that football coaches in south Florida are not in this for the money. It is a huge joke. They coach because they love the game and teaching and developing the student/athletes

While several jobs were filled this off-season, two that pegged the interest meter came with the hiring of longtime coaching icon Tim “Ice” Harris, who returned to Miami Booker T. Washington once again, and Jube Joseph, who takes the reigns of the 8-time state champion Miami Central Rockets.

Harris, who has had so much success with the Tornadoes, comes in to bring this football team to the top after laying down the foundation at Florida Memorial University – bringing back the sport to the Miami Gardens campus for the first time in 60 years.

In coming back to Overtown, Harris spent the spring and summer getting his young team back to work with plenty of camps, combines and 7-on-7 events.

For Coach Joseph, who takes over for the legendary Roland Smith, it was all about maintaining the excellence this program has been used to.

With Smith now at his alma mater (University of Miami), the transition was seamless as the Rockets are looking forward to another banner season with some quality players as well as tremendous coaching staff.

In addition to Harris and Joseph, Miami-Dade and Broward will welcome some quality and experienced faces that many know in this region.

Here is a look at some of the new faces on the sidelines for 2022:

Bridgeprep Academy (Rav Maisonet). A successful coach who has been involved with a number of programs in the past. Tremendous teach who knows how to elevate talent and get the most out of his players.

Coral Springs (Fred Flowers). Having been around some impressive head coaches in the past, making the move out west from Fort Lauderdale Dillard will give this passionate teacher a huge advantage. He knows the game and is a solid teacher. Getting talent to buy into his vision is important for the Colts.

Deerfield Beach (Tramaine Hall). It is never easy taking over your alma mater, but this is someone who comes home with plenty of credentials as a player at North Carolina State and as a football mind. This spring and summer has been about developing and teacher prospects who have plenty of potential.

Doral Ronald Reagan (Frank Rojas). One of the veteran coaches who has been around the game in south Florida for decades. His ability to teach and develop players is something that this program has to look forward to. Has worked with FBU for several years, so his contacts are vast.

Homestead Everglades Prep (Carlos Fonseca). Taking over a program that is still growing and building was the perfect position who has been teach and producing talent for years - most recently at the now closed Hialeah Champagnat Catholic. He is the newest coaching change in south Florida.

Lauderdale Lakes Boyd Anderson (Eddie Brown). This is his second go around with the Cobras, and this time around, he is just as optimistic that he can turn things around like he did the first time around. Having played the game and being around it for decades, this was the perfect choice to help this program.

Miami Coral Park (Vernon Wilder III). If the name sounds familiar, it should. This is a family that has enjoyed success for many decades as tremendous coaches, teachers and developers. Has surrounded himself with plenty of coaches who share his same passion.

Miami Killian (Bryce Bishop). Another coach who came home, and while things have been rough so far, there is light at the end of the tunnel. This former Ohio State standout is the perfect person to bring into a program that finished 12-1 a year ago. For those who may not know his background, it’s wise to watch and see how much he knows about the game. For those who left, they are missing out on some valuable experience.

Miami Monsignor Pace (Anthony Walker). While he took over at the end of last season, he is officially the head man for the Spartans, and you can see the amazing things that he has already been able to do with this program. Tremendous coaching and quality football talent that has a chance to surprise some people. They have had a great off-season.

Miami Southridge (Pierre Senatus). Miami Booker T. Washington, Miramar, McArthur and Florida Memorial University are three of the stops this knowledgeable and quality coach has on his resume. Coming to a situation that has the chance to turn around in the coming years, parents, students and fellow coaches will see what experience looks like – and he has proven to be very special and popular in the past.

North Miami (Gerald Cox). While he can use Coconut Creek and Miami Booker T. Washington on his resume, this is certainly someone who knows the game and is well connected. One of the passionate teachers in south Florida, he has an opportunity to harness a Pioneer program that just needs to hold on to the student/athletes they develop and teach the game.

Plantation American Heritage (Mike Smith). Taking over one of the most successful teams in the state of Florida, here is someone who is well respected and knows the game very well. Steps into the head job after years as Pat Surtain’s reliable assistant. Definitely a coach that players love to compete for.

South Plantation (Colby Erskin). As this program has not been successful in a number of years, here is a detailed coach who loves the game and is a teacher that the Paladins have been looking for. Time will tell, but so far, the off-season has been productive. There has been plenty of  work this spring and summer.

Southwest Miami (Mario Menendez). Takes over a program that has been building with some impressive talent, and this is someone who is willing to make an effort to revive the Eagles – as they also search for answers to keep some of the gifted prospects who begin at the school in the 9th and 10th grade.

Sunshine Ranches Archbishop McCarthy (Dino Mangiero). After years of veteran head coach Byron Walker developing and teaching some quality talent, this is a coach who is like so many – looking for ways to enhance the program. With several quality coaches who have had past experience, getting athletes who buy into what the Mavericks want to do is essential. This is a team that has shown they can win if things fall into place.