5 Class of 2024 Prospects To Watch In south Florida 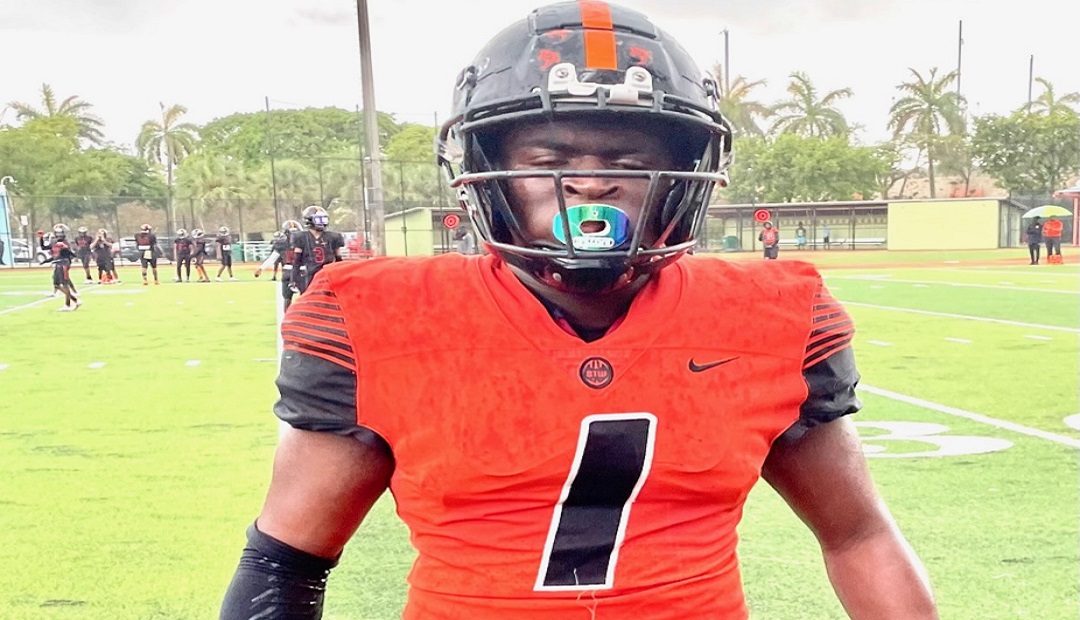 While many rank and evaluate athletes via video, the one thing that we have always done is see the prospects in person.

Using tape as an enhancement, seeing everything that a football player does – from five-feet away is certainly something that needs to be done.

Anyone can judge whether a talented prospect can play the game by just watching film. The same film that millions of others have the opportunity to view. But to watch them and see their character, the way they handle themselves during a game or practice and what kind of teammate they are, cannot be watched on a Hudl video.

Because we have the pleasure of watching  EVERY player at all levels during the course of a year, we see things that many others may not get the chance to watch, and that is something that we have been able to do for a long period of time.

While everyone misses out on rating prospects, you have a better chance of predicting what these young men will do when you are standing right next to them and being a part of their maturity and learning process.

Today, we shine the spotlight on five impressive Class of 2024 football players from Miami-Dade and Broward Counties:

Khamani Alexander, RB, 6-1, 185, Miami Belen Jesuit. For those who have never watched him play, you are missing something very special. While many have not rated him high in the class, they are underselling this quality talent who can do it all. His vision, strength, quickness and ability to pick up the tough yards will certainly thrust him into the major spotlight this coming year. College coaches who have watched him play are already sold and believe that he will only get better.

Jacory Barney, WR/FS, 6-1, 160, Miami Palmetto. In a region of the country where there are plenty of elite football prospects, here is another one to add to that mix. No matter where you put him, he is going to come up big – and after a tremendous spring where college coaches and recruiting fan websites had the opportunity to see him – this is indeed someone who will be in the spotlight every time this team plays in 2022.

Chance Robinson, WR, 6-2, 180, Fort Lauderdale St. Thomas Aquinas. On a team loaded with elite playmakers, here is a gifted football talent who has been getting it done the past two years and continues to impress. Because he picks things up quickly, his game changes all the time – and that is a great thing for the Raiders who begin the season in the national spotlight once again. Talk to anyone who has played with or against him and all will agree that his game is among the best in south Florida – in any class.

Antwan “A.J.” Smith, RB, 6-0, 220, Miami Booker T. Washington. Every time people talk about the Tornadoes, this is one of the players that they talk about, and for good reason. His size, strength and ability to run the ball against anyone is the reason that college coaches have been paying close attention. After a solid spring, his summer drew praise everywhere this team went during the college camp season. He and fellow junior Gerald Modest are as good a duo as you will find, and opponents will find that out.

Bryce Stringer, DE, 6-2, 220, Hollywood Chaminade-Madonna. Ever since he arrived on campus all this quality talent has done is make plays and produce. Fits right into one of the best defensive units in Florida – because his athletic, smart and has a passion to play this game at a high level. Keep an eye on his play the next two seasons. Has big time potential that he has already tapped into.