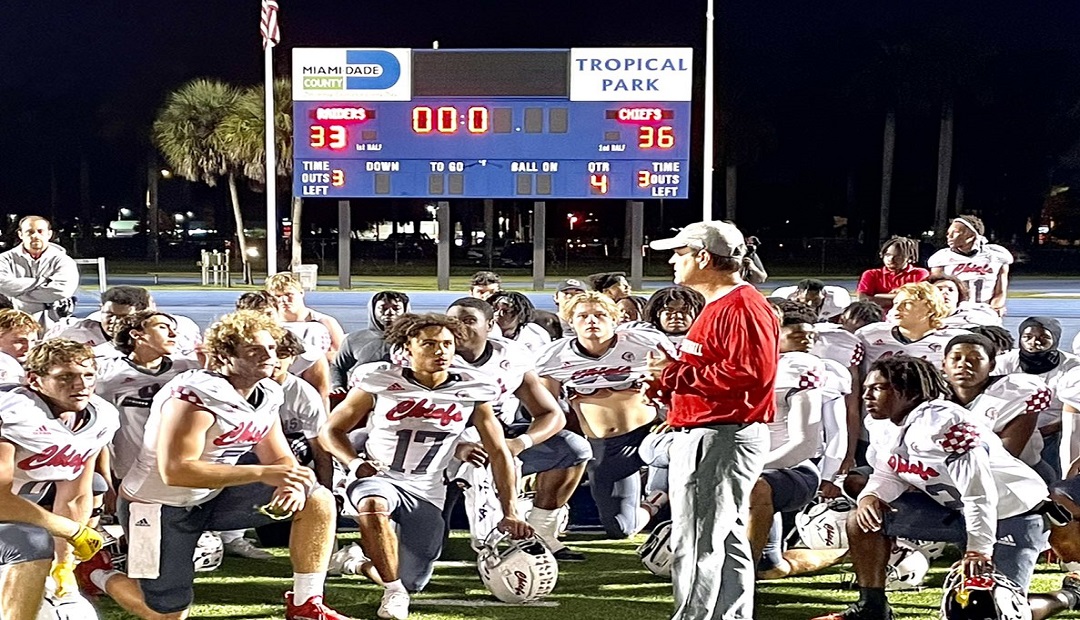 While defending 4A state champion Cardinal Gibbons and Miami Gulliver Prep have been talked about since the Chiefs beat the Raiders in 2020, 29-7.

The same was not the case for two-time defending champion Miami Central and unbeaten Miami Killian. Nobody could have predicted that head coach Derrick Gibson and the Cougars would have been a No. 1 seed, let alone come into the regionl finals unbeaten.

It was one year of agony for Gulliver Prep since losing to the Chiefs last year, so this was the season that they went out and once again secured home field advantage, and for the first half of the game – building a 27-7 lead, it appeared that finally, this team, which had lost in heart-breaking fashion to Booker T. Washington two years ago, and to Cardinal Gibbons in 2020, would finally stop the madness. But it never happened.

The second half saw a much different game – on both sides of the field, and despite three interceptions, Dylan Rizk still enjoyed quite a night through the air, completing 24-of-33 passes for 255 yards and one touchdown. He was every bit the leader that head coach Matt Dubuc and his coaches felt he would be – especially with games on the line.

The Chiefs came all the way back using Rizk, but also sensational runners Karmari Moulton and Willie Reed to escape with a 36-33 win and some stunned Gulliver players, coaches and fans.

Lost in so much excitement was the way Gulliver quarterback and Tulane commit Carson Haggard had an amazing first half, completing 14 passes for 163 yards and four touchdowns, three of those to fellow Tulane commit C.J. Donaldson.

But in the second half, it was very much the play of senior DE Mason Thomas, who is as productive as any prospects you will find, and Ahmad Moten, who was everywhere.

Raiders’ standouts Sedrick Irvin Jr. (running back), and safeties Jayvon Only and  Antonio Smith all came up big in the 36-33 loss.

There are so many things that change in the landscape of football in south Florida, but not Miami Central Rockets, who move into the state semifinal for the third straight year after a convincing win against Killian.

The Rockets, with a 39-13 win, advance to the 5A state semifinals and will host Glen St. Mary Baker County thanks to the play of junior DE Ruben Bain, who had four sacks and now 27 for the season. He was in the backfield more than the Cougars’ running backs.

THIRD ROUND WAS VERY BUSY

In addition to that titanic matchup between the Rockets and Cougars – and Chiefs and Raiders, there were some other interesting games this past week.

No. 5 Miami Christopher Columbus 22, No. 2 Miami Palmetto 14. This was the rubber match between these two teams, and the Explorers will now hit the road to give south Florida a team in the 8A finals.

No. 1 Fort Lauderdale St. Thomas Aquinas 56, No. 2 Homestead 7. This is Round 3 of the state playoffs, so you know that head coach Roger Harriott and his Raiders are more than ready for any challenge. As two-time defending state champions, they are huge favorites to win it all – again.

No. 3 Miami Northwestern 57, No. 8 Plantation 14. Yet another team that you do not have to say a word when it comes to playoff time. The Bulls are crushing everyone and have been in numerous regional finals and state semifinals.

No. 1 Hollywood Chaminade-Madonna 48, No. 3 West Palm Beach Cardinal Newman 0. The dreams season continues for the Lions and head coach Dameon Jones as they will be looking for their sixth state trip to the state finals. The defense remains as the best in Florida in 2021.

No. 2 Hialeah Champagnat Catholic 38, No. 5 Fort Pierce John Carroll 28. The Lions are ready for yet another run at a state title. After last Friday’s game, they will be going for a sixth straight trip to the 2A finals with a win in Naples this week.

SPRING FOCUS: Dillard Is A Surprise No Longer