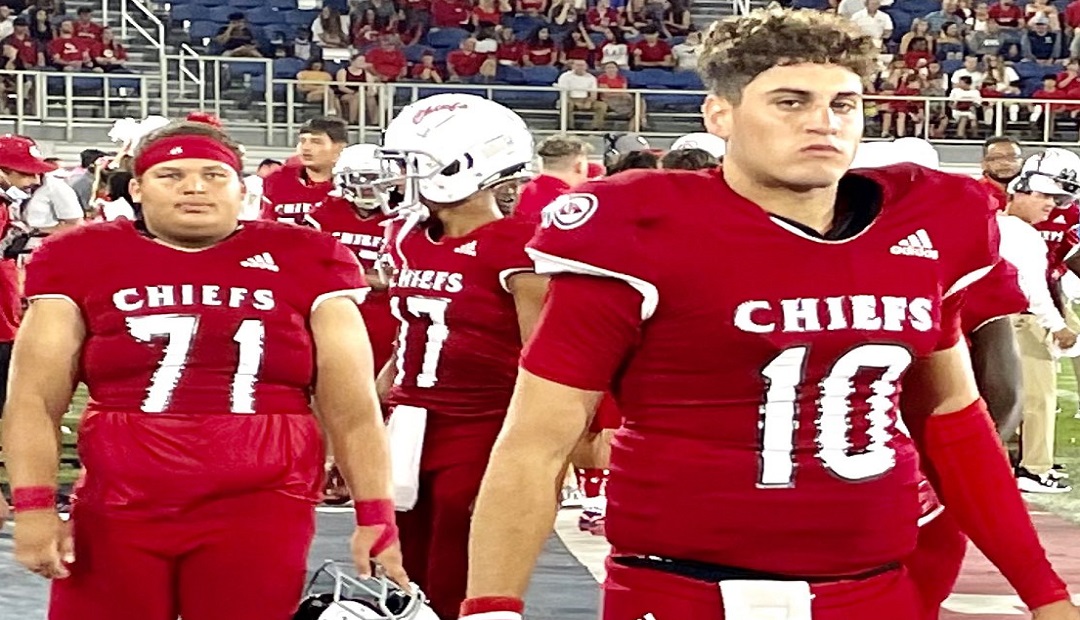 It’s been a year since Fort Lauderdale Cardinal Gibbons beat Miami Gulliver Prep, 29-7, and went on to win the 4A state title.

While the Chiefs relished in the victory last November at FIU Stadium, the Raiders used that loss as motivation, and tonight (7:30) at Tropical Park in Miami, this matchup, over 12 months in the waiting, will be played with so much on the line.

Both teams are stacked with playmakers and plenty of talent – and this game certainly is one of the premier games as we have hit Week 3 of the state playoffs.

The Chiefs Have Outscored The Opposition, 331-149

The Raiders Have Outscored The Opposition, 349-137.

No. 5 Miami Christopher Columbus (8-3) at No. 2 Miami Palmetto (9-2), Harris Field. For the third time this season, these teams will get together and you can almost guarantee that it will be close, competitive and come right down to the wire.

Two solid and well coached teams are south Florida’s only hope in 8A.

No. 2 Homestead (10-1) at No. 1 Fort Lauderdale St. Thomas Aquinas (11-1). The Raiders have been down this road before – many, many times and have prevailed. They are as good a high school program as you will find – with coaching and personnel matching up against anyone in the country. They come into this game as huge favorites.

For the Broncos, this is a one of those games of a decade – or maybe even longer. To be playing three rounds deep means that they belong here. They are looking to prove the so-called “experts” wrong. We will see Friday night at 11!

No. 8 Plantation (9-2) at No. 3 Miami Northwestern (9-3), Traz Powell Stadium. After have the clock run on them in the second half against rival Miami Central – as well as being overwhelmed by Venice in the kickoff classic and IMG during the season, the Bulls are back and playing championship football – and as a No. 3 seed – will be home.

For the Colonels, they were fortunate to have gotten into the tournament as a No. 8 seed, beating the brakes off No. 1 Fort Myers Dunbar to open the playoffs and then taking district rival Coconut Creek by 35.

While everyone believe that the Colonels have no chance, maybe you need to ask Dunbar, who had won 11 straight until Plantation ruined their plans at home!

No. 3 West Palm Beach Cardinal Newman (8-3) at No. 1 Hollywood Chaminade-Madonna (8-1). All the Lions want to do is get back to the state finals and finished what they come up short on. They are one of the best teams in Florida and nobody will change that opinion. They are well coached, talented and looking for an amazing sixth consecutive trip to the 3A state finals.

The Crusaders are going to be the team of the future – and they will be in this game again next year. You can count on that, but this really shouldn’t be close. Chaminade is better in every phase of the game and it would be a MAJOR upset if they lost in this round.

No. 5 Fort Pierce John Carroll (7-2) at No. 2 Hialeah Champagnat Catholic (8-2) – Monsignor Pace. The Lions are also looking for their sixth straight trip to the 2A state finals – and are the two-time defending state champions, who have taken care of business when needed.

Since Champagnat Catholic is a very young team, a win this year could create more of a dynasty in south Florida.