All Eyes Are On Secondary Guru Chad Wilson 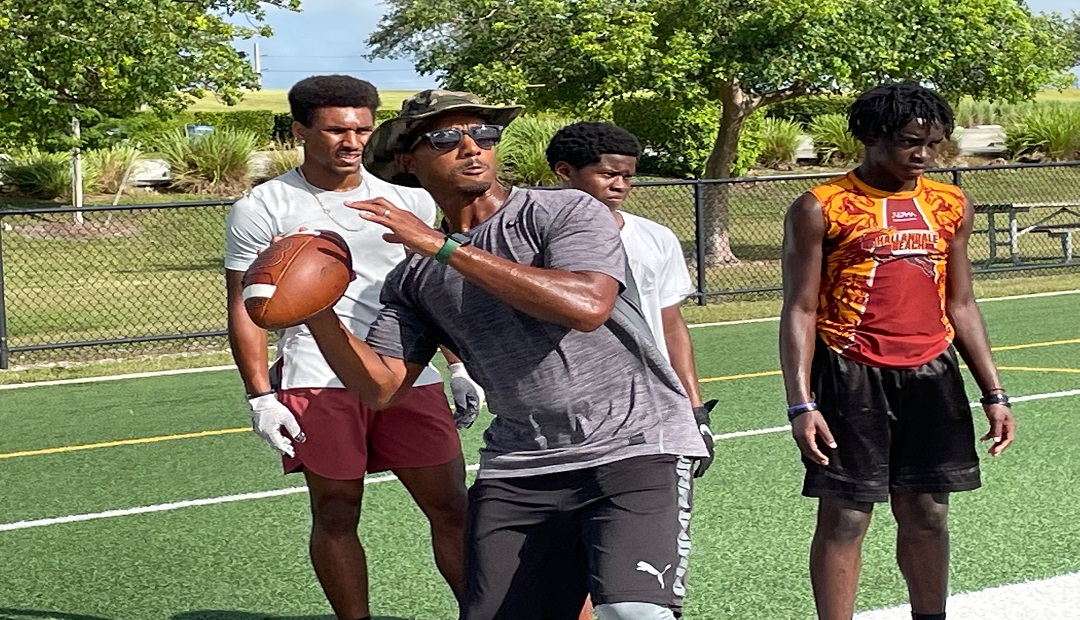 He has played major college football at Long Beach State and the University of Miami, raised two sons who are currently in the NFL and has coached and coordinated defenses for decades. Welcome to the world of Chad Wilson.

On a Saturday morning when many youngsters are sleeping in, headed to the beach or just hanging out, Wilson is hosting over a dozen defensive backs at Ives Park in North Miami Dade County.

As they go through drills in the blazing sun and rising humidity, this impressive coach shares the decades of knowledge as a secondary specialist who knows the position as well as anyone who plays or coaches.

His All Eyes Camp is attended year round by so many in south Florida who are looking to gain an advantage at the high school, college and professional level.

As his wife Carmen shoots video for the prospects on hand to see, Wilson thrusts himself into the drills and personally shows each and every student-athlete on hand what they are doing wrong – and also things that they are doing right. There is a mutual respect on both sides of the ball, as the players on hand realize that Wilson has been there and done all this before – many times.

With his older son Quincy, a one-time Indianapolis Colts selection and current Miami Dolphin, and Marco, who was selected by the Arizona Cardinals, he has two year round students who still use dad as a major training plus. Both attended the University of Florida – much to the disappointment of Miami fans, who had hoped both would choose his alma mater.

What Chad and Carmen have always been is supportive to all their children – and trips every weekend to college games, and now to the NFL contests will show how much they care and how much they are involved.

When he was coaching at Plantation American Heritage, Chad used to hop a plane or get in a car to make Quincy’s games at Florida. He also did the same for Marco until it got too much.

Today, Chad and Carmen are a team who work together on the camps and travel together to watch their sons perform.

If you think that Carmen doesn’t know the game, you would be fooling yourself. She has watched and learned the sport through the years as a youth football parent, high school mom, college fan and now at the NFL level.

“I love doing this,” she said. “It’s all about support, and being out here in 100 degree heat is part of what we do to make sure that these young men have the chance to make it at this level and beyond.”

As the session winds down, Chad has time to reflect on all the prospects he has had the pleasure of teaching and being around.

FUTUTRE STARS WORK ON THEIR CRAFT

While Wilson’s past has opened the door for the future, his current weekly group looks like a who’s who of stars on the rise. Prospects such as Kimari Robinson (St. Thomas - 2023), Jaiden Outar (Miami Palmetto – 2023), Daniel Harris (Miami Gulliver – 2023) and Miami Monsignor Pace High’s Donovan Philord.

If you are interested in turning up the volume in your career in the defensive secondary, reach out to Wilson (@GridironStuds on Twitter or Instagram) and see what it can do for you.

5 Class of 2023 south Florida Prospects On The Rise