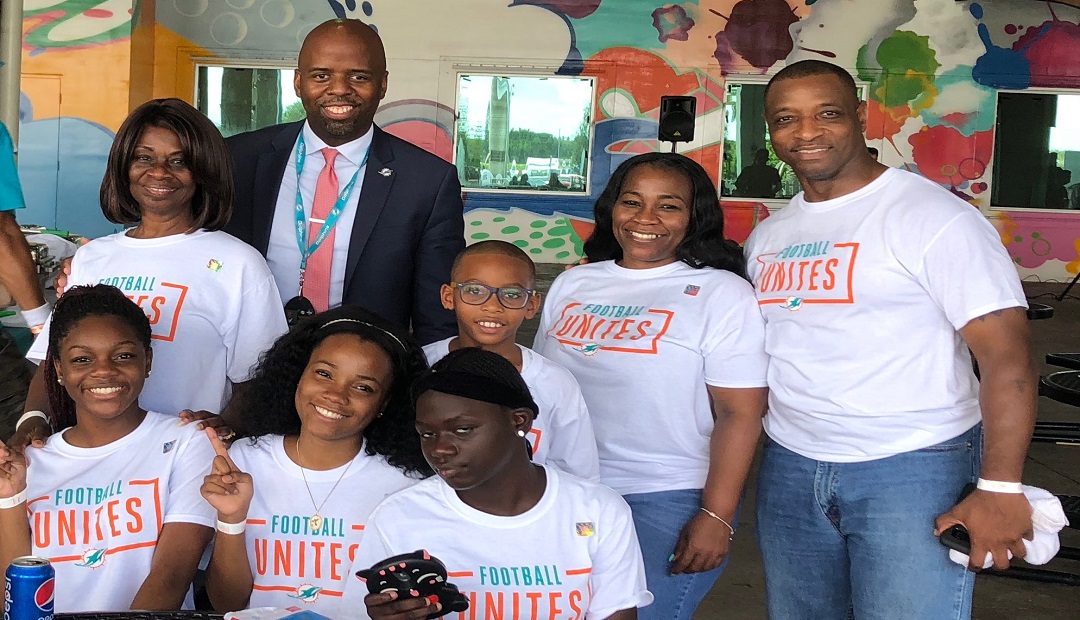 I’ll say this so you can grasp the magnitude of Jason Jenkins’ loss.

Statewide high school media days, high profile matchups, community liaison and the bridge between high school sports and the entire NFL. He was the center of it all. A true pioneer and risk taker.

When people talked about doing things and dreaming, Jason Jenkins made sure they got done, and they continued to get done.

This Texan with a heart of gold and a mind of a genius was taken from us over the weekend at 47. Tragic. Hurtful. Headshaking.

This father, husband, son and great friend is no longer with us, and while the Miami Dolphins and those who knew and respected him are saddened and will mourn his loss, I will reflect on what he did on this earth to make things better.

Many never have the chance to make an impact and influence on so many people the way Jenkins did – and continued to do.

The Dolphins’ senior vice president of communications and community affairs leaves behind his wife, Elizabeth and three children, but also memories of what he accomplished in his short time on this earth.

When he arrived in south Florida, this Texas Tech graduate called me to introduce himself and talk about the plans he had to bridge a rather large gap between the youth and the professional athlete. He was blown away that I knew his father played with the Houston Oilers and that was the opening that created such a strong bond with someone who appreciated what he was all about.

“Imagine having games here at our stadium with local high schools taking part,” he said. “(former Dolphin) Twan Russell and I were talking about hosting media days for all south Florida high schools and even donating equipment so these young men and women can have a better chance to succeed.”

Fighting against the establishment who frowned at the idea of having high school football and flag football share an NFL facility for games and other events was thought to be a pipe dream – as was hosting 7-on-7 tournaments with 80 high schools and using the practice facility for a myriad of events. But Jenkins knew what it would mean to the community to have the Dolphins involved. His brilliant mind also realized that those youth and high school athletes were future season ticket holders and fans.

Through the years, we talked and dreamed together. We knew that if the ball started to roll between the Dolphins and the community, it would spread – and he was right.

At one point in this process, there was NOT one other NFL team doing what Miami was accomplishing within the community. The template was being set – and as we sit here today – nearly every NFL franchise hosts media days, 7-on-7 for boys and girls, donates equipment and invites teams to watch training camp, eat lunch and meet the players and coaches.

The most important part of anyone’s life is the legacy they leave. The impact that they make – and the class they display while accomplishing things and certainly thinking out of the box – and he did all that.

On a personal note: when I was sidelined with double pneumonia and Covid back in January, it was Jason Jenkins who never stopped worrying and making sure that if I needed anything, he and the Miami Dolphins were there for me – and while there are no words to describe that feeling – you take a step back and give thanks that we had the opportunity to be a part of his life.

Rest in eternal peace my friend. You are indeed one of God’s Angels – proudly wearing your Texas Tech and Dolphins’ caps.

Killian Has The Talent To Compete; St. Thomas Back On Track