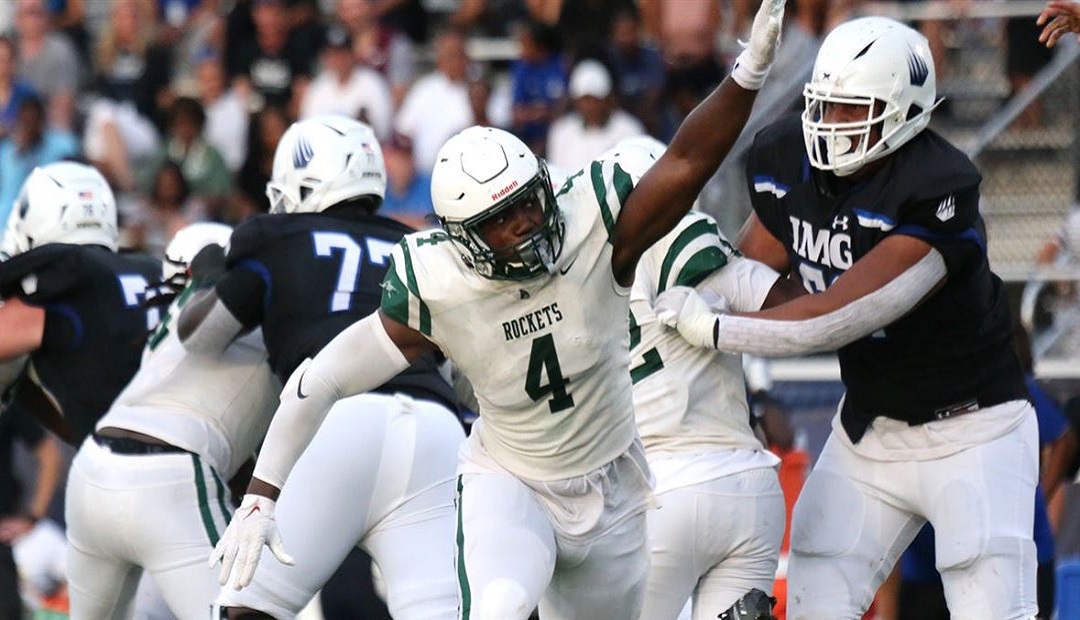 Okay California, Texas and just about every state that continues to beat their collective chest when it comes to being the best in the country.

Listen up national “recruiting and high school experts” – your lack of knowledge of south Florida is starting to shine throughout – in a major way.

What happened in the first weekend of the 2022 high school football season certainly backed up what everyone was boasting about. If you are going to proclaim to be the best in the country – ALL roads lead through the #305 and #954 – HUGE FACTS!

With eight games that featured south Florida competition against out of state teams, this area was 7-1 – and that included victories over nationally-regarded teams.

While the national analysts prepare their excuses and start to throw other teams in the faces of those who are now convinced, as are thousands of college coaches, that this region of the country plays the best football at the high school, hold on to your sour grapes – because NOBODY wants to hear it.

With this past weekend did was show that the national polls are based on fiction and NOT fact.

Even the national analysts who headed down to south Florida left with the idea that someone is not doing their homework, and the numbers in the NFL and at highly-rated college programs do not lie.

South Florida teams will run from nobody, and that was illustrated in the seven Inaugural Broward County Showcase games along with two others that shined a rather large spotlight on this area.

Perhaps the biggest attention grabber was a public school – Miami Central – who has only south Florida players to compete with against a team that had the “best” players, facilities and are headed to elite schools, IMG Academy.

In head coach Jube Joseph’s debut, the Rockets shocked everyone but themselves and further pointed out that the Ascenders were avoiding this Florida powerhouse for years.

While the 20-14 win may have been a total surprise to some, the three-time defending state champions, felt they had a chance to win as soon as the buses pulled out of 95th Street.

The win will send this team into a high national ranking – and schools across the country will not say a thing. Remember, the Rockets travel everywhere and meet every challenge, win or lose. This is a PUBLIC school people. Not a private factory that dresses in uniforms and has real hamburgers for lunch.

While Central was moving to 1-0, so did others schools who were part of the Broward Showcase:

American Heritage (Plantation) 56, Los Alamitos, California 27. Coach Mike Smith’s debut was indeed amazing, and the Patriots took advantage of every opportunity to put points on the board while showcasing a solid defense.

Another program that the national analysts are eating humble pie over this week as they get ready for the REAL season – against Florida competition that very few want any part of.

Cardinal Gibbons (Fort Lauderdale) 11, DeMatha Catholic, Maryland 6. The two-time defending state champions were thought by many to have no chance of knocking off longtime national power, who have enjoyed immense success. While head coach Matt Dubuc’s team still tried to figure things out on offense, the defense was suffocating and certainly took center stage.

This program has won three of the past four state titles and has one of the best coaching staffs anywhere, and with the out of state power gone, it’s time to concentrate on the real season – and that continues to the next few weeks.

Chaminade-Madonna 35, St. John’s College Prep, Washington DC 28. In one of the most anticipated Broward Showcase games, the young Lions, who have been to the state championship game five straight years, squared off with national powerhouse.

Head Coach Dameon Jones and his squad jumped out to a convincing 35-7 lead, only to hang on and win a game filled with mistakes. This team now gets ready for one of the toughest schedules in Florida – and they are very much ready for the challenge ahead. As good as they are now, they will continue to improve the next two years.

Dillard 35, Rock Creek Christian, Maryland 0. One of the teams that everyone has been talking about are the Panthers, and starting out with a convincing win against an out-of-state team, head coach Tyler Tate had the chance to tee exactly what his team was all about.

After jumping out a commanding lead, this team had the opportunity to see some youngers prospects perform and get ready for the next four weeks – which will define the 2022 season.

What the Raiders did was get the chance to look at some new players who were getting the national spotlight for the first time. With a solid schedule the rest of the way, this was a game needed to see where they were on the national landscape as well as locally.

Western 33, Johns Creek, Georgia 14. One of the programs people were warned about all off-season started the year off right – as head coach Adam Ratkevich and his Wildcats cruised over a young team in the first half and then had the chance to look at some younger prospects the rest of the way.

Another team that has been building to this point, and of course another team the national “experts” still have little clue about.

While they will get their chance to show what they can do, this is a program that can stand toe-to-toe with anyone.

Christopher Columbus 41, Benedictine Academy, Georgia 15. Like Miami Central, head coach Dave Dunn and his Explorers were not part of the Broward Showcase, and that didn’t stop this team from making a major statement against a solid team.

While much of the focus has not been on this football team, that will change as some quality opponents wait in the wings over the next month that will this team more than a chance to make a major statement.

In addition to those games, here is a look at how Week 1 went for the rest of Miami-Dade and Broward Counties:

You Can Contact Larry Blustein with prospect or team information at: This email address is being protected from spambots. You need JavaScript enabled to view it.