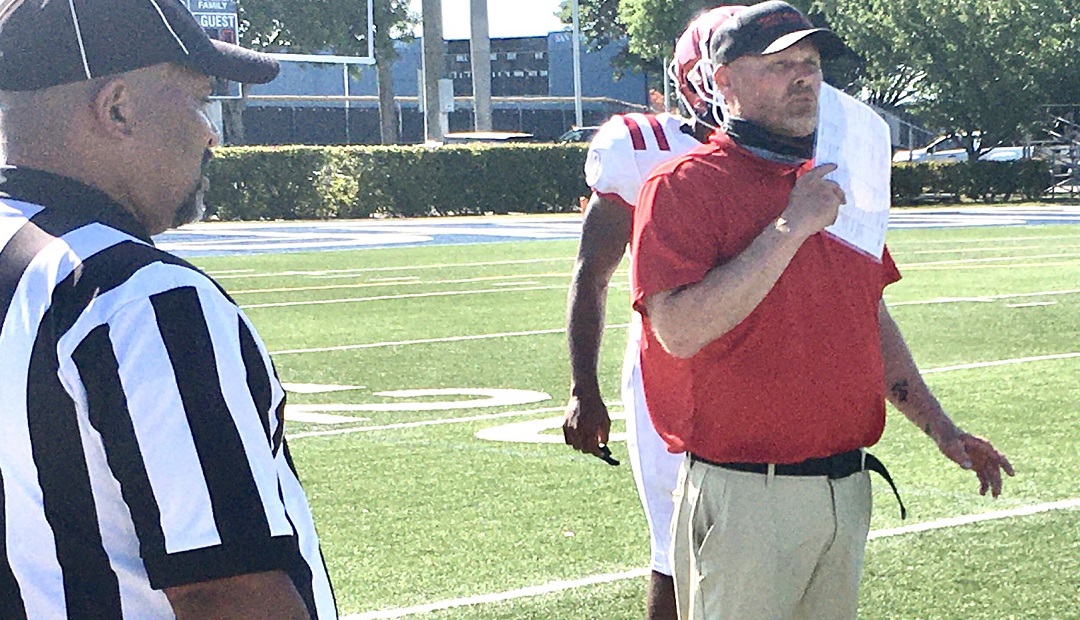 When it comes to football coaches in south Florida, we have long heard that they just do not match up with the rest of the nation. FALSE!

Having covered high school football for over a half century and seeing what this country has to offer on the football field, you just shake your head at how little people know or understand.

While there are brilliant high school football coaches all over this great country – and many have set standards and are true community legends to the people who played for them and supported them. But with plenty respect to all of them – from California to New Jersey and in every small town in the nation, what it takes to become a football coach in south Florida is NOT for everyone.

You are not pampered and embarrassingly paid. Many of the athletes that you coach have baggage and scars that will never go away. You go from being a coach to a sounding board in a split second.

South Florida is a place that everyone has advice and a recipe for success. Conversations get heated – because they are often about local stars who have made it to the NFL from area youth and high school football fields. What it all comes down to is understanding the culture and appreciate year round weather and a cultural mix that has brought thousands of college coaches into Miami-Dade and Broward.

While coaching changes are made all the time – with those who just couldn’t balance everything that exists beyond the football field – new faces are brought in, many times hoping to follow in the successful footsteps of a Nick Kotys, George Smith, Tim “Ice” Harris, Otis Gray, Walt Frazier, Billy Rolle and so many others.

Will we ever see a Jeff Bertani again? Here is someone who took over his alma mater – North Miami Beach – nearly 30 years ago – and has never left.

Through his criticism of only carrying 32 players, his athletes were all football and the classroom - and went on to play at the next level – and still do.

Bertani has fed, clothed and helped generations of students become better people. His former players flock back to him. Miami-Dade County owes him. They owe him for being a great mentor to athletes and students alike, and not when the cameras were rolling. He grew up around the game and continues to make an impact.

When Roland Smith is done coaching, his name better be on some street or building – because he played in his hometown of Miami all of his career and has continued to give back. Seven state titles and counting, and producing players and coaches who continue to have success to this day. He is one of the best and most successful of all time.

We are blessed to have Roger Harriott (St. Thomas Aquinas), Max Edwards (Northwestern), Dave Dunn (Christopher Columbus), longtime coach and mentor Don Chaney Sr. (Miami Belen Jesuit), Matt Dubuc (Cardinal Gibbons) and Luther Campbell, who has been around the game all of his life and continues to promote the prospects and his Miami Edison Red Raiders.

Do you know how valuable it is to have former Dolphin Pat Surtain (Plantation American Heritage), Hector Clavijo (Champagnat Catholic), teacher, mentor and coach George Stubbs (Dade Christian), state and national championship coach Rocco Casullo (Cypress Bay), nationally-recognized Dameon Jones (Chaminade-Madonna) or up-and-coming Dillard head coach Tyler Tate on your sideline and in your practices? These are coaches who have so much knowledge and continue to do this because they love the game.

What about Calvary Christian Academy head coach Kirk Hoza? Chosen – along with the great teacher/coach Richard Dunbar (Fort Lauderdale) - to receive free Super Bowl tickets two years ago in Miami for what they have represented to the youth.

Hoza was a major college defensive back coach in his 20s and a coordinator in his 30s. If he wasn’t all about giving his life to Jesus and making things better for his football players, he could easily be in the NFL right now. Great football mind. Better person!

The list of those young coaches who are going through the process in south Florida could go on forever. Amazing community-oriented coaches who get their student/athletes into college like Javon Glenn (Deerfield Beach) and veteran Byron Walker (Archbishop McCarthy), who has spilled his wisdom and knowledge into a fourth decade.

There are so many influential coaches in south Florida, it would take several blogs to list them all. But when the conversation comes up about this state not having the coaching that other areas of the nation produce, as we said before, this is like no other region in the nation – where you can be masterful with your Xs and Os, but never fully experience everything (good and bad) that goes along with the ultimate coaching experience.

2022 Receivers Continue To Catch On