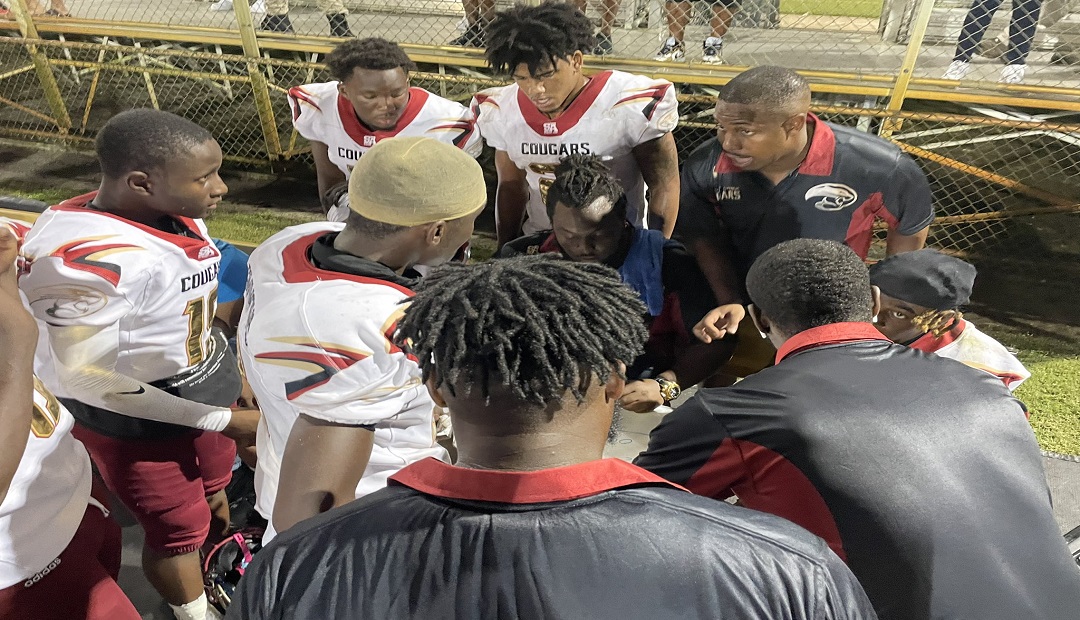 Every once in a while, there is a week during the season where things play out the way they are supposed to.

This past week was certainly one of those – with only Chaminade-Madonna’s victory on the road against national powerhouse Buford, Ga. – going different than most thought. Other than that, very few teams moved this week.

From No. 1 Cardinal Gibbons getting their first test of the season – to Miami Central St. Thomas Aquinas, Miami Gulliver Prep, Killian, Dillard and Western all staying strong among the top 10 teams.

With a crazy start to the 2021 season, in the first four weeks, it was about time that things slowed down, and they certainly did.

Only Plantation and Douglas dropped out of this week’s top 20 teams in south Florida, and were replaced by first timers Coconut Creek, a solid team, and 3A Florida Christian, which moved to 4-0 after beating area 8A team, Southwest Miami.

In the coming weeks, district games and huge showdowns will start to scramble the top teams – and we will bring them all to you.

Here is the way Week 5 stacks up:

1.Fort Lauderdale Cardinal Gibbons Chiefs (4A, 3-0). Going on the road to play an unbeaten Gainesville Buchholz team and coming back with a 16-7 win keeps head coach Matt Dubuc’s team on top once again this week. THIS WEEK: Another road game against Fort Lauderdale Calvary Christian on Sept. 24. NEXT OPPONENT: A huge home game against No. 6 Plantation American Heritage on Oct. 1.

2. Miami Central Rockets (5A, 2-2). Scoring early and often, the first district win of the season was impressive – 55-0 against Miami Springs. THIS WEEK: Another district game at home against No. 16 North Miami Beach on Thursday, Sept. 23 at 7:30. NEXT OPPONENT: It’s No. 11 Miami Northwestern on Friday, Oct. 1 at Traz Powell Stadium.

3. Fort Lauderdale St. Thomas Aquinas Raiders (7A, 3-1). In beating Miami Monsignor Pace 56-6, this is a team that had the chance to play plenty of prospects. THIS WEEK: Another huge home game on Sept. 24 against No. 9 Western. NEXT OPPONENT: Yet another home game against Cooper City in a district matchup on Oct. 1.

4. Hollywood Chaminade-Madonna Lions (3A, 3-1). Not only did the 7-0 win at Georgia’s No. 1 team, Buford, make news locally, but grabbed the spotlight nationally as well. Huge win for a program that has the toughest schedule in Florida – and maybe the country! THIS WEEK: A home game on Sept. 24 against No. 12 and two-time defending 2A state champion Hialeah Champagnat Catholic. NEXT OPPONENT: It gets no easier at all as a trip to play unbeaten defending 8A state champion Sanford Seminole is on tap for Oct. 1.

5. Miami Gulliver Prep Raiders (4A, 3-0). In flexing some offensive muscle, this team went up to North Palm Beach and took care of business against Benjamin, 49-14. THIS WEEK: A 3:30 home game against 2A power Dade Christian on Sept. 24. NEXT OPPONENT: At press time, the program was still searching out an opponent for Oct. 8.

6. Plantation American Heritage Patriots (5A, 1-2). With the trip to New Orleans called off, this is a program that is just looking to get back on the field. THIS WEEK: At press time, no opponent has been found. NEXT OPPONENT: A huge matchup on the road against No. 1 Cardinal Gibbons on Oct. 1.

7. Miami Killian Cougars (5A, 4-0). Turning it up on both sides of the ball, head coach Derrick Gibson and his team rolled over Miami Jackson, 40-0. THIS WEEK: An away game at Miami Carol City on Thursday, Sept. 23. NEXT OPPONENT: A home game against Miami Booker T. Washington on Oct. 1.

8. Fort Lauderdale Dillard Panthers (7A, 3-0). Rolling to their 22nd win in the past 23 games, a 50-0 win against district foe Cooper City kept this team rolling along. THIS WEEK: A Saturday (Sept. 25) district game against South Plantation. NEXT OPPONENT: An away district game at Nova on Oct. 1.

9. Davie Western Wildcats (8A, 2-1). Coach Adam Ratkevich and his program came up with a huge win, 44-0, against Coral Glades. THIS WEEK: A trip to No. 3 St. Thomas Aquinas on Sept. 24. NEXT OPPONENT: Back to district competition and a trip to Weston Cypress Bay on Oct. 1.

10. Deerfield Beach Bucks (8A, 3-1). A huge 29-2 road district win against Douglas keeps this team on track. THIS WEEK: A road game at state-rated and unbeaten Rockledge on Sept. 24. NEXT OPPONENT: Another district game – at home against Monarch on Oct. 1.

11. Miami Northwestern Bulls (6A, 3-1). Coach Max Edwards and his team got back on the winning track with a 42-14 district game against Belen Jesuit. THIS WEEK: It’s the “Soul Bowl” this Friday at home against Miami Jackson. NEXT OPPONENT: It’s the annual clash with No. 2 Miami Central on Oct. 1 at Traz Powell Stadium.

12. Hialeah Champagnat Catholic (2A, 3-1). An impressive road game at the always tough Fort Meade produced a 26-7 victory. THIS WEEK: A Sept. 24 game at 3A powerhouse and No. 4 Chaminade-Madonna. NEXT OPPONENT: Another huge test next Friday at 4A power and No. 5 Miami Gulliver Prep.

13. Miami Palmetto Panthers (8A, 2-1). Bouncing back with a convincing district win against Miami Coral Reef, 42-0. THIS WEEK: A huge 8A road game against No. 18 Christopher Columbus will be a huge contest on Sept. 24. NEXT OPPONENT: A Thursday, Sept. 30 game at home against Southwest Miami.

14. Homestead Broncos (7A, 2-1). With the week off this team moved up one spot as the season continues. THIS WEEK: The Broncos will host Mater Academy on Sept. 24. NEXT OPPONENT: An away game at Miami Southridge on Oct. 1.

15. Miami Edison Red Raiders (3A, 2-1). With last Saturday night’s game called off because of Covid, this team continues to get ready for the second half of the season. THIS WEEK: A key Thursday night contest against Miami Booker T. Washington. NEXT OPPONENT: A trip to state 7A power Niceville on Oct. 8.

17. Miami Christopher Columbus Explorers (8A, 1-2). The game with South Dade was postponed. THIS WEEK: Things do not get any easier as No. 13 Miami Palmetto comes in for a key 8A game on Sept. 24. NEXT OPPONENT: A home game against Monsignor Pace on Oct. 1.

18. Doral Academy Firebirds (7A, 3-0). In staying unbeaten and in the spotlight, a convincing 49-12 win over Mater Academy was indeed a district victory. THIS WEEK: A Sept. 24 home game against Miami Southridge. NEXT OPPONENT: A district home game on Oct. 1.

19. Coconut Creek Cougars (6A, 3-1). A convincing 27-7 district win over Plantation put this team into the Top 20 for the first time this year. THIS WEEK: A Friday home game against Pompano Beach Blanche Ely on Friday. NEXT OPPONENT: A huge non district game on Oct. 8 at No. 9 Western.

20. Florida Christian Patriots (3A, 4-0). Coming off a convincing 35-13 win over 8A Southwest Miami, head coach Joe Burmeister and his team enters the Top 20 this week. THIS WEEK: A big game against unbeaten Somerset Academy Pembroke Pines on Friday. NEXT OPPONENT: After a week off, they will travel to play Miami Westminster Academy on Oct. 8.