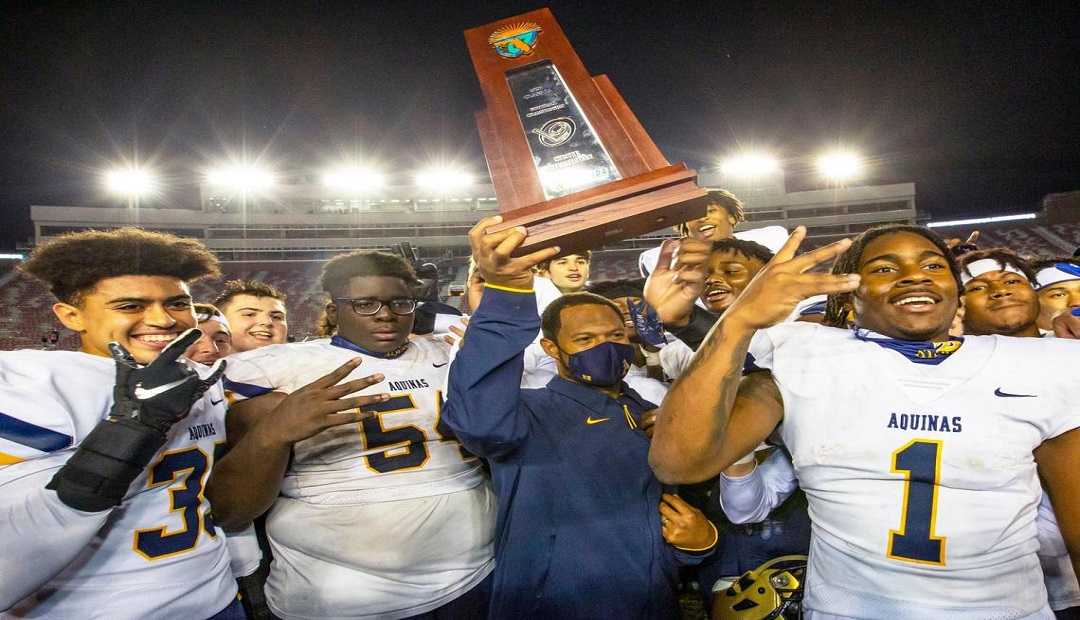 As we bring you the first south Florida Top 20 football teams, keep in mind that every week, things will change.

Because you don’t start the season in the top 20 – do not get crazy – everything plays out – as you will see in the first few weeks.

Our objective is to put as many teams in this listing as possible. But winning is certainly a criteria that needs to be made.

Please save you texts and messages. Wait until Week 16 – and if we don’t have it right by then, you will have every right to complain.

Enjoy – and understand that very few people see the players and coaches we do over a course of a year, so we do have a reference point that many do not have.

1. Fort Lauderdale St. Thomas Aquinas Raiders (7A). We all know what is expected of this football team every year. Head Coach Roger Harriott’s team is stacked with prospects, again. THIS WEEK: St. Francis Academy, Saturday. NEXT OPPONENT: at Plantation, Sept. 3.

2. Miami Central Rockets (5A – 0-1). After a solid show against national powerhouse St. John Bosco in California, head coach Roland Smith and his team will now get set for another top tier program. THIS WEEK: Off. NEXT OPPONENT: Las Vegas Bishop Gorman, Sept. 4, Naples.

3. Plantation American Heritage Patriots (5A).  What more can you say about this impressive team that went up against power IMG and more than held its own. Head Coach Pat Surtain and his staff have done an excellent job. THIS WEEK: A trip to Naples to play St. Lucie Treasure Coast. NEXT OPPONENT: Back home for a meeting with 3A power Chaminade Madonna on Sept. 3.

4. Fort Lauderdale Cardinal Gibbons Chiefs (4A). A good showing for head coach Matt Dubuc and his football team against 8A power Miami Palmetto. THIS WEEK: Due to Covid testing, the game with Venice is being moved to Oct. 23. NEXT OPPONENT: A home game on Sept. 3 against West Palm Beach Cardinal Newman.

5. Hollywood Chaminade-Madonna Lions (3A). Make no mistake, head coach Dameon Jones and his football team will have a rough schedule, but they have the talent to compete. This program is going for an amazing sixth straight trip to state. THIS WEEK: A road game at No. 9 Western on Friday night. NEXT OPPONENT: A trip to No. 3 Plantation American Heritage on Sept. 3.

6. Miami Christopher Columbus Explorers (8A). Ever since arriving, head coach Dave Dunn has given the Explorers a chance to be in the spotlight – with last year’s Tri-County title, and the thrilling 2019 Class 8A state championship. THIS WEEK: The season begins on the road at Savannah Benedictine on Friday night. NEXT OPPONENT: They will stay on the road to play Bartram Trail in the Jacksonville area on Sept. 3.

7. Deerfield Beach Bucks (8A). If it doesn’t happen in the first two weeks of the season, head coach Jevon Glenn and this football team may not lose in the regular season. They are stacked with impressive talent. THIS WEEK: Will play host to No. 15 Miami Edison on Friday night.  NEXT OPPONENT: A trip to 7A power Fort Lauderdale Dillard on Sept. 3.

8. Miami Northwestern Bulls (6A). There is no doubt that this is a team that will need the younger prospects to make this season a success. Even though they made the move to 6A this season, the road to state will not be an easy one for head coach Max Edwards and his program. THIS WEEK: A Friday night game against No. 12 and two-time defending 2A state champion Champagnat Catholic. NEXT OPPONENT: Another home game at Traz Powell Stadium  against No. 17 Booker T. Washington.

9. Davie Western Wildcats (8A). If you have followed this program over the past three years, you already know that they are talented and well coached – and head coach Adam Ratkevich and his staff are looking for much more in 2021. THIS WEEK: A Friday night home game against No. 5 Chaminade-Madonna. NEXT OPPONENT: Another home game on Sept. 3 against Hallandale.

10. Miami Palmetto Panthers (8A). Once again this season, while the so-called experts continue to count head coach Mike Manasco and his impressive squad out, this team has the talent to do what they did in 2020.  THIS WEEK: A huge road game on Friday night against No. 14 Homestead. NEXT OPPONENT: A Sept. 3 afternoon contest (4:00) at No. 11 Miami Gulliver Prep.

11. Miami Gulliver Prep Raiders (4A). Whether it was in the spring, summer or in the kickoff classic win against Miami Killian, head coach Earl Sims and his football team means business this season. THIS WEEK: On the road at 7A Bradenton Manatee. NEXT OPPONENT: A huge home game against No. 10 Miami Palmetto at 4:00.

12. Hialeah Champagnat Catholic (2A). It has gotten to the point where head coach Hector Clavijo relishes the chance to play against some of the top teams in the state and country – and as they head toward their sixth straight state finals, this is a tea, NOT to take lightly. THIS WEEK: It’s a Friday night contest against No. 8 Miami Northwestern. NEXT OPPONENT: A trip to Delray Beach to play American Heritage on Sept. 3.

13. Fort Lauderdale Dillard Panthers (7A). As head coach Tyler Tate and this football program continues to build, you can see the talent rising to the top. This is a gifted group of veteran and youth athletes that have made huge strides, winning 18 of the past 19 games. THIS WEEK: A trip to Lauderdale Lakes for a Friday game against Boyd Anderson. NEXT OPPONENT: It’s a huge Friday night game at No. 7 Deerfield Beach.

14. Homestead Broncos (7A). If you follow high school football, you already know the amazing job that head coach Phillip Simpson and his staff have done with this team. Plenty of playmakers for a program that will test plenty of opponents in 2021.  THIS WEEK: A Friday night home game against No. 10 Miami Palmetto. NEXT OPPONENT: The battle for bragging rights against South Dade on Sept. 3.

15. Miami Edison Red Raiders (3A). If you want to play some of the best football talent in the state of Florida, head coach Luther Campbell and his football team is where you want to be. Once again, they are legitimate contenders for the playoffs. THIS WEEK: The season opens on the road against No. 7 Deerfield Beach. NEXT OPPONENT: The team will take off before a major stretch run.

16. Miami Killian Cougars (5A). With several new faces on the roster, head coach Derrick Gibson and his staff will need to ease these gifted prospects on the roster. The schedule will get lighter at the end of the season. THIS WEEK: Friday night game at Miramar. NEXT OPPONENT: A home game on Sept. 3 against Miami Norland.

17. Miami Booker T. Washington Tornadoes (4A). Coach Gerald Cox has quite a schedule in front of his football teams this year. After a solid off-season, the Tornadoes are ready to compete. THIS WEEK: A Thursday night game at Traz Powell Stadium against Miami Norland to start the season. NEXT OPPONENT: A trip to No. 8 Miami Northwestern.

18. Miami Monsignor Pace Spartans (4A). A few years in as head coach and Mario Perez is starting to assemble a very talented program. One that has impressive and highly rated football talent. THIS WEEK: Will take on Coral Gables to open the season on Friday. NEXT OPPONENT: A home game against 2A Dade Christian on Sept. 3

19. Plantation Colonels (6A). Once upon a time, head coach Steve Davis and his football team played at the 8A level. The team then went down to 7A – and as this season begins, they are now 6A. THIS WEEK: The season opens on the road at South Miami at Tropical Park. NEXT OPPONENT: A Sept. 3 game at home against No. 1 St. Thomas Aquinas.

20. North Miami Beach Chargers (5A). The key to veteran head coach Jeff Bertani and his squad is stay healthy. Several key players go both ways for this talented program. THIS WEEK: The season begins on Friday with a game against longtime rival North Miami. NEXT OPPONENT: A trip to Sanford on Sept. 3 against defending 8A state champion Seminole.