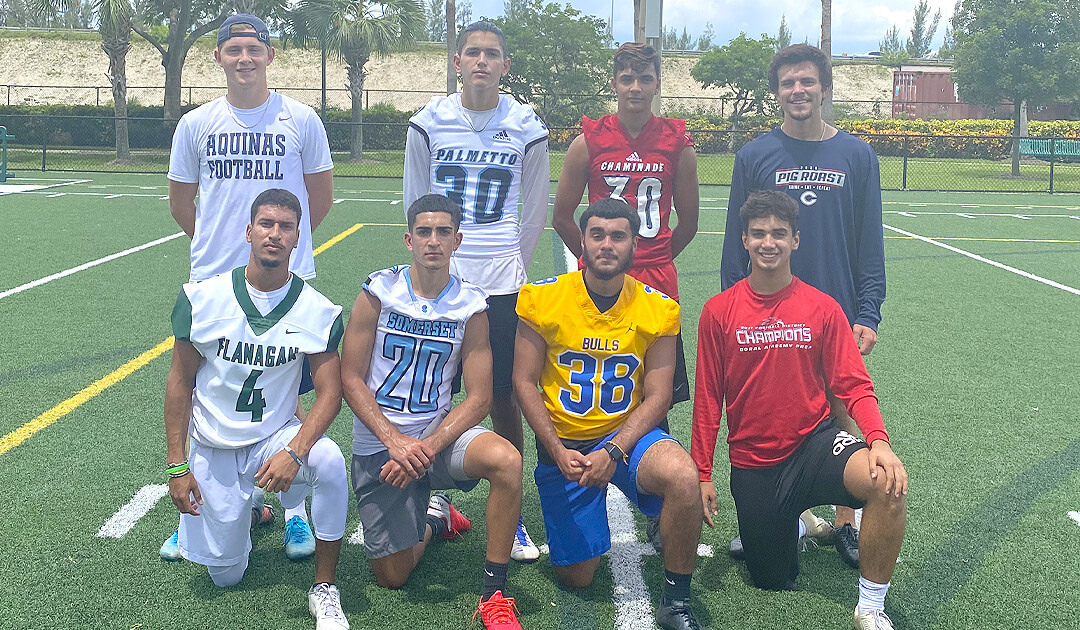 Thirty years ago, Oscar Castaneda stood among some of Miami-Dade County’s elite football prospects as one of the best at what he did.

That was his sophomore year, where he was 12 of 15 on field goals, which included a 43-yarder to tie the game with rival Coral Gables in regulation and three more in overtime to beat the Cavaliers.

His glory as a high school kicker set the tone for a passion that has carried him through the years.

Today, he is one of the most successful kicking coaches around – working with some of the elite specialists in south Florida – and throughout the country.

His OKC (Oscar Kicking Camp) has attracted elite kickers – some who have moved on to the next level – while others are high school stars.

While University of Miami-bound and nationally-rated Class of 2021 standout Andres Borregales (Chaminade-Madonna) may be his most famous current prospect, he is not alone.

This Class of 2021 is stacked with some big time specialists, which includes:

Noah Botsford, Fort Lauderdale St. Thomas Aquinas. This five-star standout is a strong kicker and punter and helped to lead the Raiders to an unbeaten season.

Gabriel Herrera, Somerset Academy Silver Palms. One of the emerging kickers in this class. Helped this program reach the state playoffs for the first time.

Joshua Lopes, Doral Academy. Here is one of those young men who has been at this for a long time – and as his senior year is here – he is one of the best again.

Diego Navia, Miami Palmetto. After coming in from South Dade, this is a tremendous talent who has the chance to be very special.

Alejandro Prado, Miami Christopher Columbus. Truly one of the difference makers in south Florida, who has enjoyed a very productive off-season.

Damian Ramos, Baltimore, Maryland. Another 5-star specialist who is the No. 1 rated kicker in Maryland.

Oliver Romanach, Miami Belen Jesuit. One of the strong prospects who has also enjoyed a very productive off-season.

Noe Rosales, Oakland Park Northeast. A solid kicker and punter who has made some major strides over the past year.

Leo Zuazo, Miami Northwestern. Yet another of the state championship specialists that Castaneda continues to work with. He was also a head-turner in the off-season.

CLASS OF 2022 PROSPECTS ARE MAKING NOISE

In addition to this current senior class, the Class of 2022 has four impressive specialists that made a huge splash in the off-season.

At the top of that list is one of the nation’s best in Will Bettridge, who is a 5-star kicker/punter, who will be one of the top kickers nationally.

Bettridge, who led Miami Gulliver Prep to an unbeaten regular season and a No. 1 seed among 4A schools, is a tremendous student/athlete.

Here are some of the other 2022 kickers who will be heard from:

SPRING FOCUS: Central Is Right Where They Need To Be