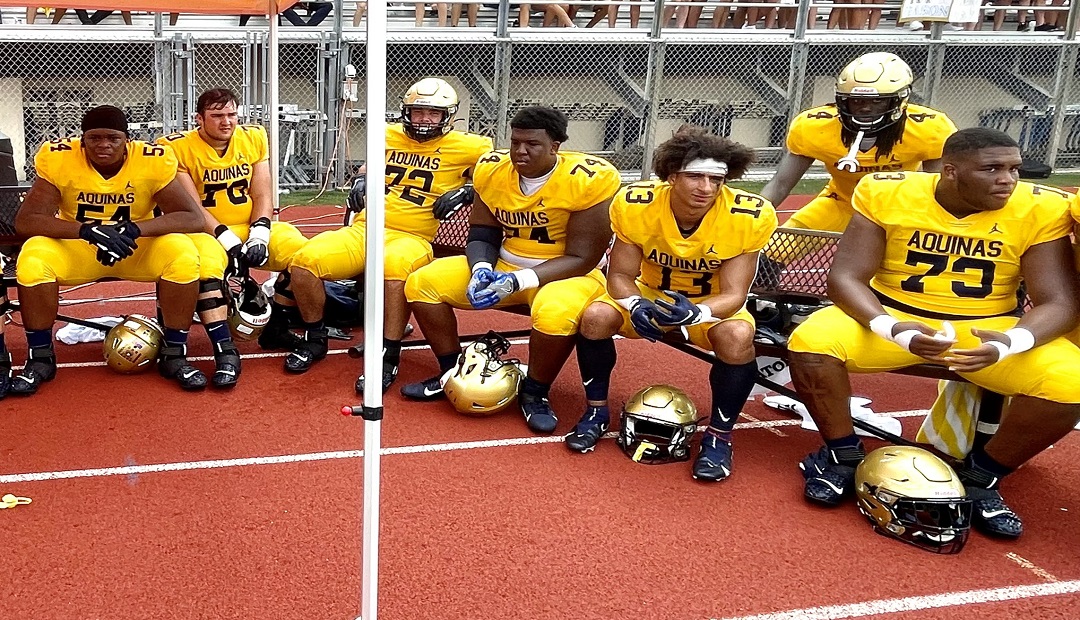 Once again this evening, south Florida will be rolling out the welcome mat for some of the top games in Florida.

While that much-awaited game between 3A power Chaminade-Madonna and two-time defending 2A state champion Champagnat Catholic was called off due to Covid, there are other games to keep an eye on as well – involving top teams.

The Chaminade and Champagnat Catholic contest brought together a pair of teams that have won five combined state titles in the past four years, so that would have been a good game to watch.

Instead, No. 9 Western and No. 3 St. Thomas Aquinas will kick things off this evening in Fort Lauderdale at 7.

This is a game that could prove to be very interesting – even though the Wildcats already lost to Chaminade-Madonna to start the season.

Head Coach Adam Ratkevich and his team have plenty to prove tonight – as they still remain in the hunt for an 8A playoff spot.

The Raiders are once again putting things back together after a loss to Tampa Jesuit, and a win here will keep them sharp with No. 1 Cardinal Gibbons and district foe Dillard still coming up.

In addition to that game, there are others that will share the spotlight on this Friday evening.

No. 1 Cardinal Gibbons at Fort Lauderdale Calvary Christian, 7. On the road for the second straight week for the top team in south Florida – and with Plantation American Heritage coming up, this will be a game that the Chiefs need to work on some more facets of the game. Expect no letdown after a huge road win in Gainesville last week.

Dade Christian at No. 5 Miami Gulliver Prep, 3:30. The Raiders bounced back from a tough game with TRU Prep two weeks ago and showcased plenty of offense in a win at North Palm Beach Benjamin. The 2A Crusaders can make a major statement with a positive showing in this afternoon contest. Another tune-up for a solid football program.

No. 10 Deerfield Beach at Rockledge, 7. The Bucks rebounded from a loss to Dillard with a huge district win at Douglas last week, but faces an unbeaten team on the road. Rockledge is a solid program and well coached, but have not been able to play well against south Florida teams through the years. A really big game for both teams.

No. 20 Florida Christian at Pembroke Pines Somerset Academy, 7:30. Here is one of those games between two unbeaten teams that are still trying to prove themselves in the south Florida football community. Both programs are stacked with talent and are well coached. We will see which team is further along.

No. 13 Palmetto at No. 18 Miami Christopher Columbus, 7. Perhaps not as big a game as it was a month ago – with both teams having lost games, but this is still a huge 8A game, and as we know, both teams are loaded with talent – and are more than capable of playing with the best. Key early game that will get plenty of interest.

THERE ARE MORE GAMES TO CHECK OUT

In addition to those impressive games, there are others that will be worth taking a drive to see.

SEVERAL SOUTH FLORIDA GAMES WERE POSTPONED OR CANCELLED. As They are rescheduled, we will post.