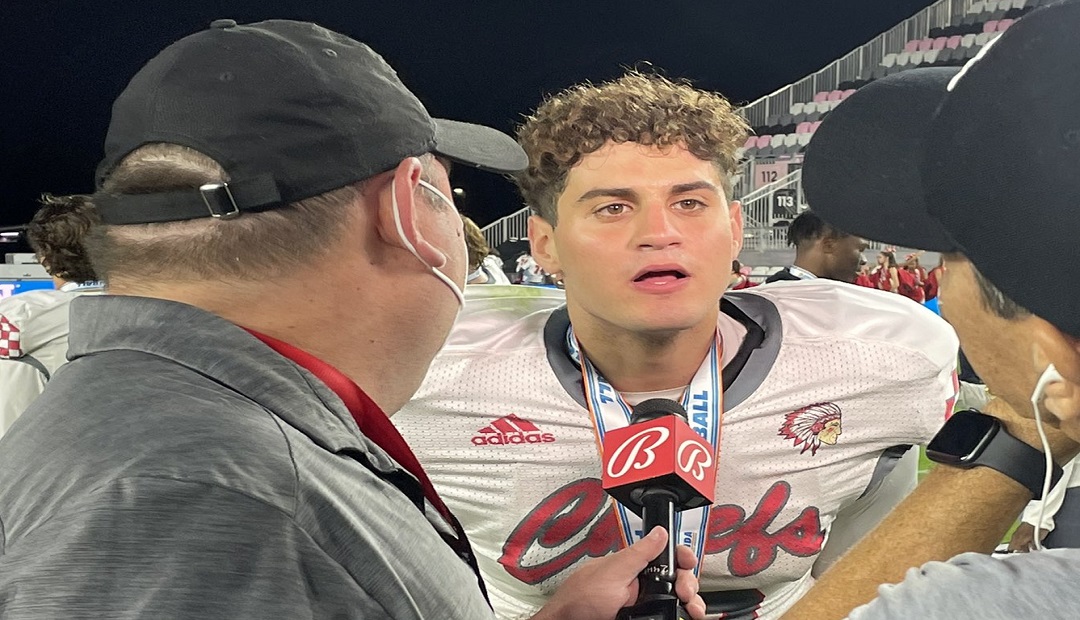 On a night when DRV PNK Stadium was introduced to the high school football world, the hometown team made the return of the state championships to Fort Lauderdale one to remember.

Winning the 4A state title for the second straight year, and third time in four years, the “Cardiac Chiefs” wrote yet another chapter in head coach Matt Dubuc’s time as head coach.

The thrilling 21-19 win over Cocoa (11-2) before an impressive crowd of 4,500 (announced) saw quite a game. One that kicked off a three-day high school football fest that all of south Florida had been looking forward to since the games were announced.

The game was perfect in every way – with former Plantation High standout and south Florida native Ryan Schneider having the opportunity to come back home.

The win by the 11-2 Chiefs now establishes this program as a 4A power that has more than proven what they can do against all competition. Losses to Plantation American Heritage and national powerhouse St. Thomas Aquinas were balanced out by wins against Venice and Cocoa.

The Chiefs opened the scoring when Dylan Rizk found junior Jesse Anderson from 17 yards out at the 8:07 mark of the first quarter. Adrian Alfieri’s point after made it, 7-0.

The Tigers came down and tied the game up with :28 left in the opening quarter on a 3-yard run by senior standout O.J. Ross. Elijah Davis added the extra point. The two teams relied on defense to head into halftime at 7-7.

It wasn’t until the fourth quarter when this game really got exciting. Moulton’s first score of the game came with 10:41 left when he took it in from the 14 for a 14-7 advantage. But the Tigers were not finished.

When senior quarter Davin Wydner took it in from 1, the lead was cut to 14-13 and it stood that way as the two-point conversion failed with 7:25 left.

The Chiefs appeared to put the game away with 2:22 left on Moulton’s second scoring run of the game and a 21-13 advantage, but again, Cocoa would not go away.

Wydner’s 72-yard scoring strike to Kyon Calhoun cut the lead to 21-19, but the two-point conversion failed once again – and the Chiefs came away with a huge win.

While this game was very close and one of the contests people had looked forward to, there were some key performers that everyone kept an eye on.

Offensively, Wydner was 19 of 37 for 180 yards and a score. J’Mariyae Robinson caught eight balls for 43 yards and Damargio Grimes had four receptions for 39 yards.

Ross, who is easily as electrifying as anyone in the state, finished with 124 yards rushing and a score.

Cardinal Gibbons was led by Anderson with two catches for 30 yards, Moulton and Rizk, who carried for 18 yards.

SANDVIPER Looking For Your Feedback

SPRING FOCUS: Monarch Looks To Build On Its Success

Offensive Linemen Shine At The Under Armour Combine