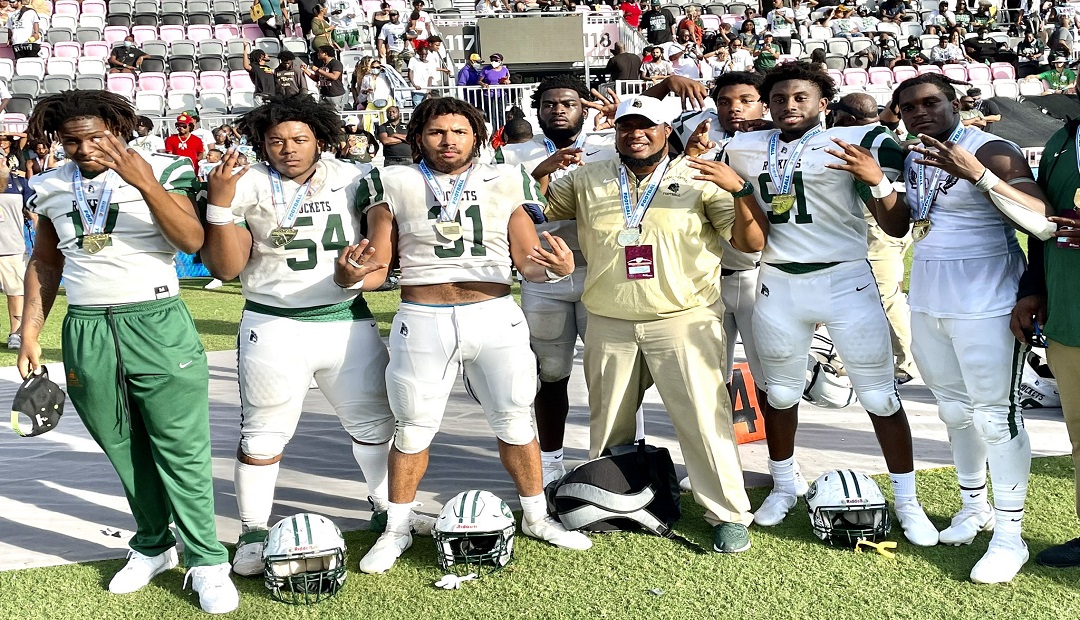 If you trace Miami Central’s past in the state championship games, you already know about head coach Roland Smith and his Rockets.

A team that is always in the mix around state playoff time, this program finished off another year with a state crown.

This team, which seems to get stronger as the season moves along did it once again this season.

After losses to California and national power St. John Bosco and by a point to Las Vegas Bishop Gorman, this team cruised their way to another state title – this time in 5A.

The Rockets got on the board first when junior Keyone Jenkins ran 13 yards for a score. Senior Jayden John made it 7-0 with 1:25 left in the opening quarter.

Central extended the lead to 14-0 when Jenkins found sophomore standout Joshisa Trader from 50 yards and a score with :22 left in the opening quarter.

Merritt Island got on the board with 6:13 remaining in the first half when senior Brady Denaburg found Dallas Donahue from 16 yards out and cut the lead to 14-7.

The Rockets once again blasted off when Trader picked off a Denaburg pass and returned it for a score and a 21-7 advantage with 3:12 left. Trader finished with four catches for 116 yards.

Central extended the lead to 28-7 when junior Dylan Tulloch found junior Lamar Seymour from 37 yards and a score with 1:23 left in the half.

The Rockets came right back to make it 35-7 at the half when Trent Henry picked off Denaburg with 1:05 left and returned it for a score.

Central started the running clock with 8:50 left in the third quarter on a 41-yard pass from Jenkins to Trader, wo scored for the second time on offense and a 42-7 lead.

The Mustangs closed out the scoring with a 16-yard scoring strike from Denaburg to Bridger Koby at the 7:11 mark.

The two teams put some number up on offense, and of course on the defensive side of the ball.

Pope led the way for the Rockets with 86 yards rushing, junior Jonathan Harris added 31. Denaburg finished with 22 for Merritt Island.