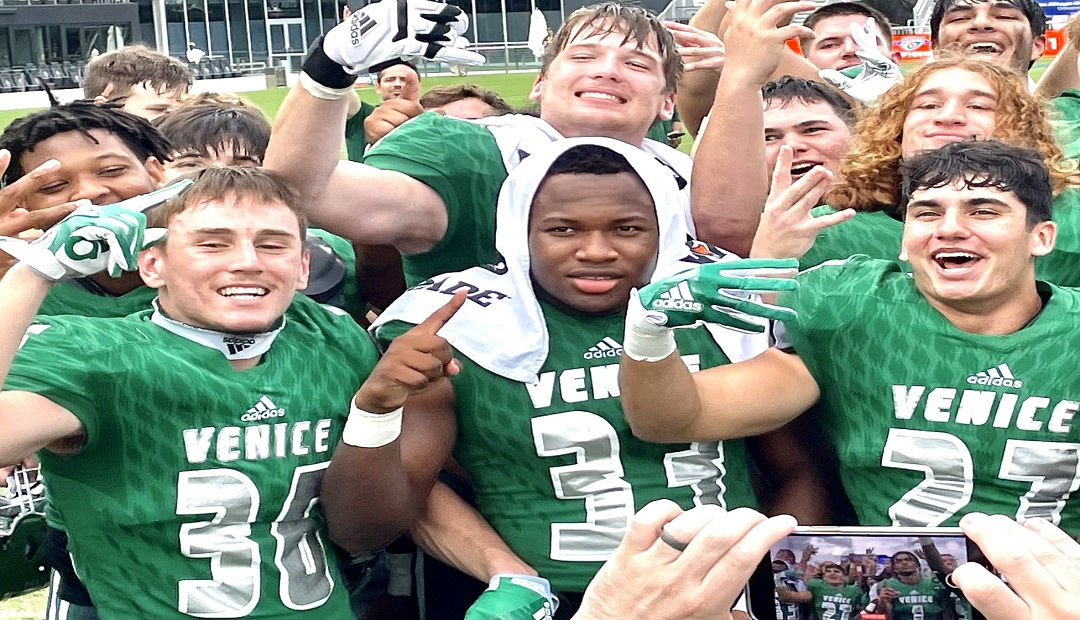 All season long, Venice and head coach John Peacock had been the talk of the state. On Saturday afternoon at DRV PNK Stadium in Fort Lauderdale, the Indians finished the season off with a convincing 8A state title game win, 35-7, over Apopka.

This program lost to 4A state champion Fort Lauderdale Cardinal Gibbons in a game filled by mistakes, and a thrilling one-point win against 4A state runner-up Cocoa. But on Saturday, this team left no doubt.

Holding the Apopka (12-3) offense to just 115 total yards, the defense dominated from start to finish.

The Indians (14-1) jumped out to a 7-0 lead when Ryan Browne found Omari Hayes and a 60-yard scoring strike with 8:54 left in the opening quarter.

The Blue Darters and coach Jeff Rollison came back to tie the game up at 7 when Zeldrick Roberts ran it in from the 2 at the 6:13 mark.

When Browne found Keyon Sears from the 22 with 3:14 left, the Indians went ahead 14-7. Venice extended the lead to 21-7 when junior standout Damon Wilson picked off an Andrew McClain pass in the endzone for a controversial score.

Venice continued to pull away in the third quarter when Browne once again found Sears at the 9:05 mark and a 28-7 advantage.

THE STATS TELL THE STORY

While there were some impressive team performances, individual prospects also made a major impact at the state championships on Saturday.

Running the ball, Damarion Escort had 111 yards and Browne finished with 31. Kayondray Jones had 70 yards for the Blue Darters.

What An Opening Weekend of Football In South Florida