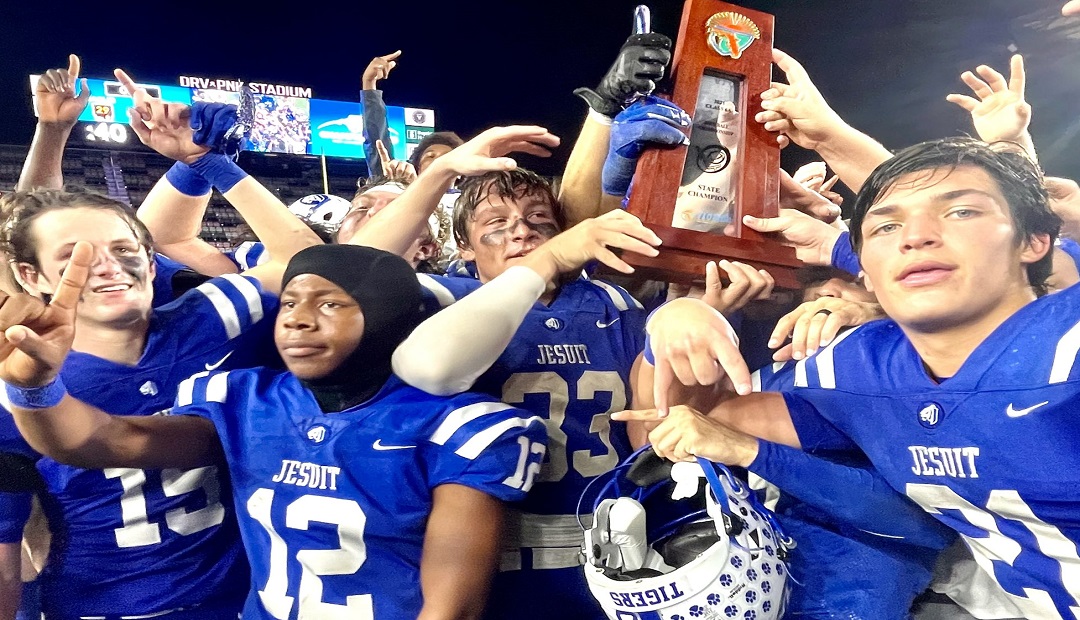 FORT LAUDERDALE - It was to be the “most lopsided” of all games. It was a matchup that was not going to play in favor of a team that had to come 653 miles and a time zone change. That’s why you play the game!

While Tampa Jesuit was an overwhelming favorite to win an elusive 6A state title – after a perfect season – Saturday night’s game at DRV PNK Stadium in Fort Lauderdale turned out to be the most exciting of the five games played.

Coming from 29-14 back with 1:57 left in the game, the Tigers capped off a perfect comeback and a state title, 35-29 against a very impressive and talented Pensacola Pine Forest squad.

From the start, the Eagles (12-2), picked toward the bottom of the Escambia County pre-season poll, defied all odds against Florida’s best team, and gave them a battle for every minute of the game.

Head Coach Matt Thompson and his staff answered every bell this year and will finish as the top team in the state when the final polls are released this week.

Instead of rolling over and bowing down to the “experts” who felt that they had no chance, the Eagles were impressive – and so was head coach Ronnie Douglas and his staff.

The Tigers got on the board first with 10:29 left in the opening quarter on a 10 yard run by Joquez Smith and a 7-0 lead.

After an interception by Tyrese Thomas, Pine Forest drove down using junior quarterback Tierra “T.J.” Wilson, who would take it in from the 4 and a tie at the 6:13 mark.

Tampa Jesuit regained the lead at 6:34 of the second quarter on a 22-yard run by Smith and a 14-7 advantage.

The Eagles would not go away – as Wilson found Donielle Hayes from the 25 at the :12 mark. The two-point conversion by Wilson gave Pine Forest a surprising 15-14 lead at the half.

Pine Forest came out in the second half and Wilson was in control, scoring from 22 yards out and a 22-14 with 6:34 left in the third quarter.

The Eagles extended their lead to 29-14 when Miequle Brock took it in from the 28 with 1:57 left in the third quarter. But the Tigers would not give in.

When sophomore Luke Knight found Junior Vandeross from 50 yards out, it made it 29-20 as the two-point conversion failed with 1:14 left in the third quarter. Everyone knew that we were in for a fantastic finish.

With 11:18 left, Knight once again found Vandeross for 28-yards out and the Tigers were on fire, trailing 29-27. But this game was far from over.

With a chance to put the game away, Pine Forest threw a crucial interception that gave the Tigers HUGE life, and they took full advantage – with Knight completing a long pass and then finding Jadyn Girard for the game winner – and the back-breaker for Pine Forest.

As many will look at the outcome of these outstanding games, they also have to check in on the performances that many had – that many never find out about.

This contest had some quality prospects on both sides of the ball.

On offense, Knight may have thrown four interceptions, but the sophomore rallied this team with 18 completions for 352 yards…Wilson had 81 yards.

The defense also filled up the stat sheet as well.

Tyrese Thomas was also a major star for the Eagles with three interceptions. He saved the team early on. So did Deontrez Lamb, who had an interception and 3 tackles.

SPRING FOCUS – Doral Academy Has A Solid Plan For The Future