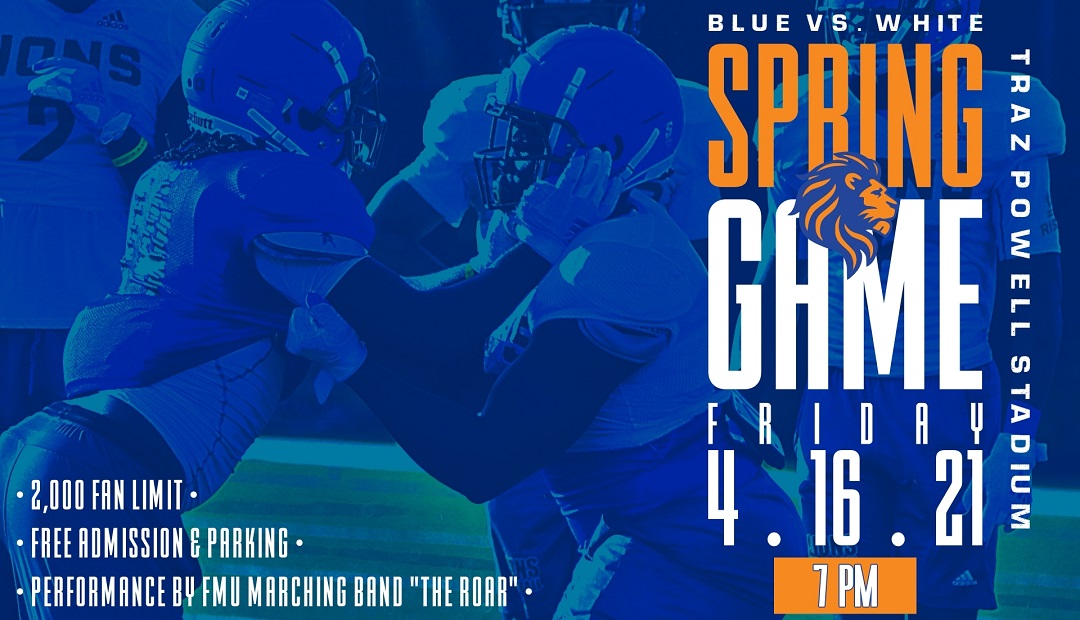 As the world continues to make a slow crawl back towards some sort of pre-pandemic normalcy, a part of that is the return of fans cheering on their favorite teams at sporting events.

Florida Memorial University fans will get the opportunity to do that when the Lions’ football program hosts its first-ever “Blue vs. White” intrasquad spring football game on April 16th at Nathaniel “Traz” Powell Stadium.

The game will be played under the lights on that Friday evening, beginning at 7 p.m.

Admission and parking will be free for fans and the stadium will be open to a maximum capacity of 2,000 spectators. Temperature checks will be administered prior to entry and fans must wear face coverings and maintain social distance while in the stands.

On the field, Florida Memorial’s football team will be split up with a blue team and a white team and play a controlled scrimmage against one another with a special point system that also awards the defense points for various positives – including interceptions, fumbles, and defensive stops on third downs.

Fans will also be treated to a performance by Florida Memorial University’s marching band “The Roar”, as well as the Lions cheerleaders.

FMU head football coach Tim “Ice” Harris said that he’s excited about the opportunity to have the Florida Memorial fans and the entire South Florida community come out and support the Lions.

“We’re all very excited about the opportunity to even have a spring game as well as the chance to have our fans and supporters come out and attend the game,” Harris said. “The team has been working really hard through our spring practices, I feel like the guys are accepting coaching, learning, and getting better each day. We didn’t have the chance to go through spring any practices this past year because of the pandemic, but the school has done a tremendous job of keeping the players and the staff safe and healthy and given us the chance to get out there develop and improve as a football program.”

“We can’t wait to put on an exciting show for the fans at the spring game,” Harris added.

The Lions, who played just three games this past fall before the season was suspended for health and safety reasons, began spring practice on March 8th at Charles Hadley Park in Miami.

The team will have gone through 34 sessions, 15 of which being official practices while the others were walk-throughs, concluding with April 16th’s spring game. Also, the spring game will be the third scrimmage that the team has this spring; the first two were at Hadley Park and Gibson Park, but were closed to the public.

City of Hialeah In Football Spotlight This Evening