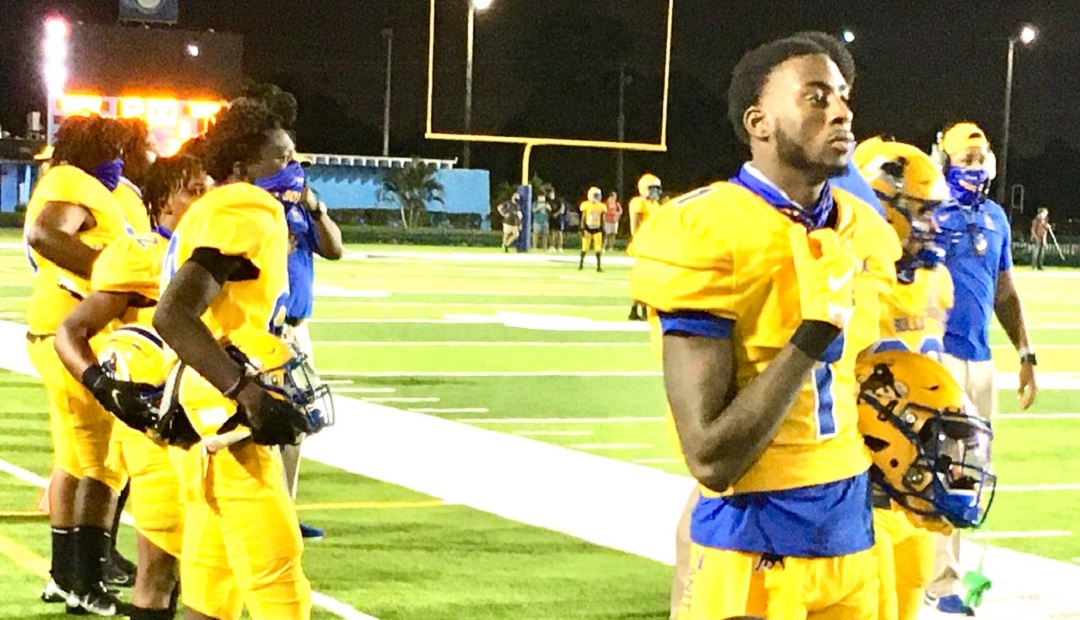 With Broward County public schools on deck to open up the high school football season this week, Miami-Dade stepped into the spotlight last week.

In a week that saw the area’s No. 1 team, St. Thomas Aquinas drop a local game to Cardinal Gibbons, the spotlight was shining directly on The “Mecca” – Traz Powell Stadium – for the annual showdown between Miami Northwestern and Miami Central.

With limited fans on hand – in a game that always sells out – the atmosphere was still electric, and by the end this war between to longtime rivals ended with the Bulls winning 21-14.

The game was a true showcase on opening night in Miami-Dade County of two of the nation’s elite public schools who continue to dominate every year.

These two prospect-rich football programs took the field with perhaps more nationally-recognized talent that just about any other school in the country.

IMG aside, these are the two best football programs and carry a rather large flag for those public schools who have not reached this amazing level.

What opening night proved for head coach Max Edwards and his three-time defending state champions is that this is a team loaded with stars. Players who have waited patiently to get back at it after a nearly six-month layoff.

The Bulls, who will actually play IMG Academy this week, and 8A power Palmetto the following week, showcased some quality athletes on Friday night.

Athletic junior Jai-Ayviauyann Celestine is a huge part of this program as well.

THE ROCKETS ARE FINDING NEW STARS

For veteran Central head coach Roland Smith and his football program, there is plenty to be excited about – with some solid playmakers.

Senior running back Amari Daniels is still a top-flight back. But he is not alone. The offense is stacked – up front with senior linemen Laurence Seymore and Jeron Scharoun, and impressive receiver/athletes Tim Brown Jr., Yulkeith Brown and Robert McMinn.

The secondary also has some athletes – in Chester Fearon, Eddrin Lollar and Elijah Vaughn.

The Class of 2023 is stacked on defense with lineman

The offense for the Class of 2023 is indeed eye-catching – with quarterback Keyone Jenkins and receiver Lamar Seymore.

In addition to Miami Northwestern’s win over Central, and Cardinal Gibbons finally breaking through against powerhouse St. Thomas Aquinas, there were some other programs that came up with big wins.

American Heritage Plantation, a 17-point underdog at Venice, was the much better team and rolled over the Indians, who had been one of the hottest teams in the Florida.

SPRING SPOTLIGHT: Wayne Favors III Getting It Done For The Chiefs