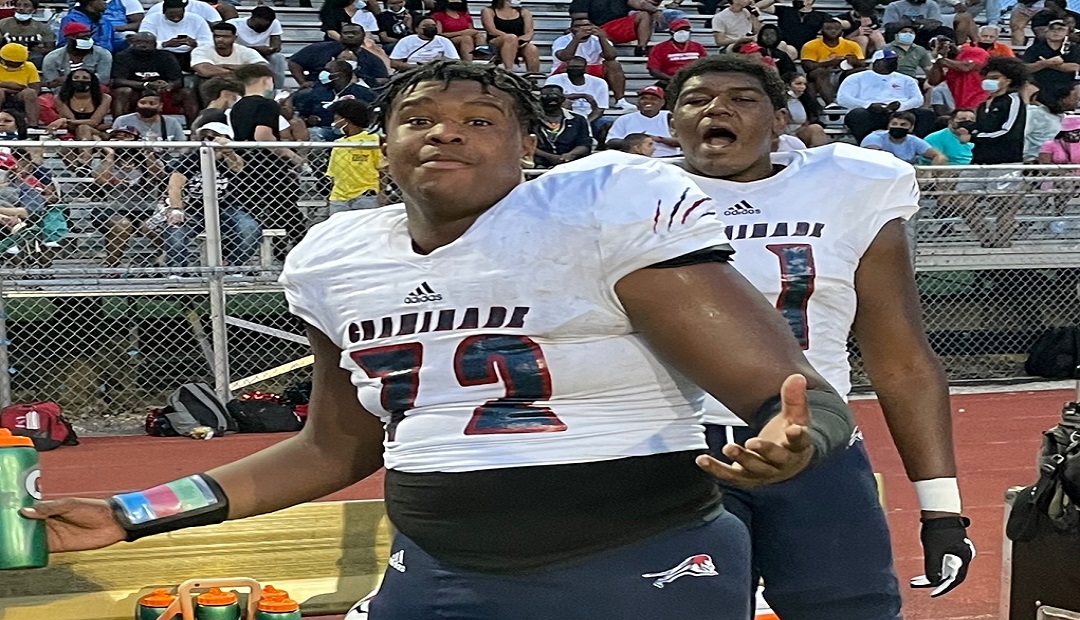 There is no doubt that there are some good games in south Florida in Week 2, but things are starting to feel a lot like 2020.

Just when we needed this football season so much, along comes Covid and finger pointing, all over again.

This was to be the week that everyone would be playing – all of the powers, as well as the programs on the rise.

First it was Everglades, then the Saturday night game between Stranahan and Miramar at “Lockhart Stadium” – Coral Gables and Southridge, and then No. 1 St. Thomas Aquinas Raiders, who were to be one of the showcase south Florida Friday night games at Plantation.

With Miami Central “hosting” Las Vegas Bishop Gorman on Saturday night in Naples, the Friday night lineup is supposed to be really good.

No. 4 Hollywood Chaminade-Madonna at No. 8 Plantation American Heritage, 7:30. Okay, what gives? Who was that team that showed up in Naples last Saturday night? It was not this talented American Heritage squad that is well coached and loaded with talent – everywhere. It’s time for this team to get it back on track as a national power should. On the other hand, if you ask any of the 3,000 fans on hand for the Western-Chaminade game last Friday, all will tell you that to beat the Lions is to penetrate a defense that recorded 10 sacks – and showed that it has the talent on offense. GREAT matchup!

No. 1 St. Thomas Aquinas at Tampa Jesuit, Saturday, 7. After the game against Plantation was called off, the Raiders searched for a replacement and came up with a very impressive Tampa Jesuit team, a program that lost to Plantation American Heritage last season in the 5A state semifinals. This year they are 6A. Coach Roger Harriott and his football team need to keep in the national spotlight, and with this game, next week against American Heritage, district foe Fort Lauderdale Dillard and defending 4A state champion Cardinal Gibbons, will keep them in the hunt.

No. 6 Deerfield Beach at No. 12 Dillard, 7. This is another key matchup that will tell both of these teams what will be needed to make an impact in the race for state. Jevon Glenn and his Bucks are loaded, and while they haven’t looked impressive in the kickoff classic and opener against Miami Edison, they are a gifted football team. The Panthers are also in need of a game that will give them an indication of what is needed to make that run. Coach Tyler Tate and this impressive team is building every year.

No. 15 Hialeah Champagnat Catholic at Delray American Heritage, 7:30. Even though the two-time 2A state champs dropped a game to 6A power Miami Northwestern, they head on the road with plenty of talent and another hurdle on their way back to an amazing sixth straight trip to the state finals. Coach Hector Clavijo and this impressive team will be play anyone – anywhere.

No. 18 Homestead at South Dade (Harris Field), 7:30. This impressive “neighborhood” game is back – and this year promises to be a four-quarter battle after each team suffered kickoff classic losses. The City of Homestead will be on display as two solid coaches collide.

No. 5 Miami Christopher Columbus at St. John’s Bartram Trail, 7. For the second straight week, the Explorers and head coach Dave Dunn are on the road against a very good team. This could be a preview of the 8A state final – with both well coached programs loaded with talent and playmakers.

Miami-Dade Christian at No. 19 Miami Monsignor Pace, 7. This is a much better game than most believe – with Dade Christian have a tremendous off-season and a solid start to the season last week. For Coach Mario Perez and the Spartans, there is plenty of optimism with a much-improved roster.

No. 17 North Miami Beach at Sanford Seminole, 7. Don’t tell head coach Jeff Bertani about how tough his opponent is this week on the road. He’s been hearing it for years and providing a memorable experience for his players. The Chargers beat rival North Miami to start the season, but this is a huge step up against a team that is loaded and ready to make a major impact once again.

No. 14 Miami Booker T. Washington at No. 7 Miami Northwestern (Traz Powell Stadium), 7:30. Both teams come into this battle off opening night wins. The Tornadoes are looking to improve over last season and get back into the playoff mix under head coach Gerald Cox. The Bulls and head coach Max Edwards were soundly beaten in the kickoff classic, but rallied together in the first game against 2A power Champagnat Catholic.

West Palm Beach Cardinal Newman at No. 3 Cardinal Gibbons, 7. With the first week off, the defending 4A state champions are set to face off against an up-and-coming program, but if head coach Matt Dubuc and his team believe they can make another solid run at a state title, this game should not be an obstacle. The Chiefs are too experienced and talented.

In addition to those marquee games, keep an eye on these contests as well:

Week 3: Cardinal Gibbons Moves To No. 1 In The South Florida Top 25