Special Teams A Priority At The Battle of The Beach 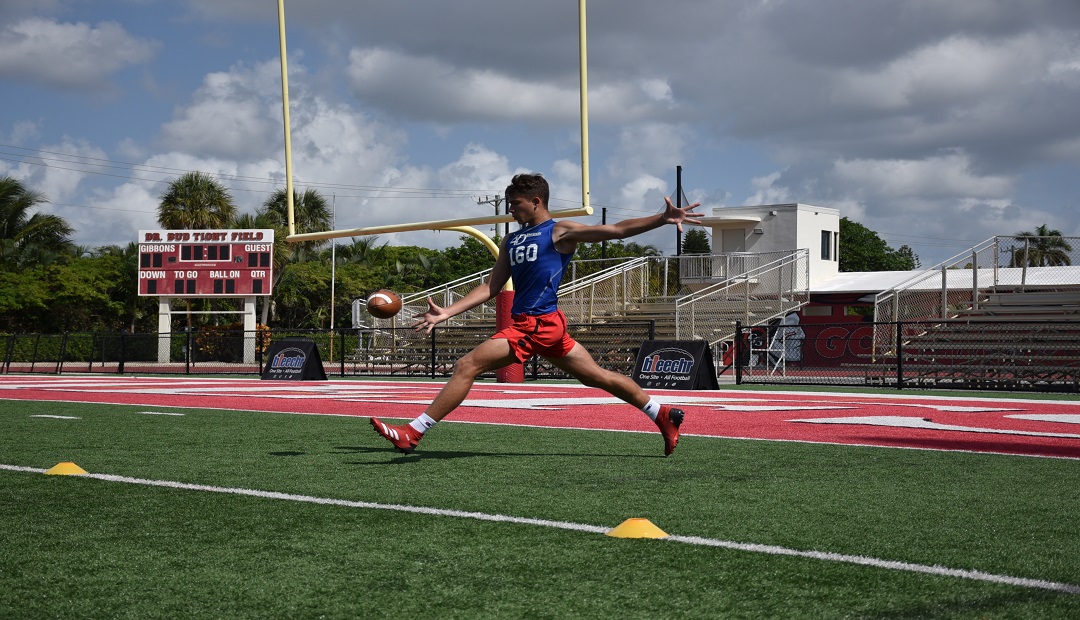 If you have followed us for any length of time, you understand that we are 100 percent in the corner of every football player in the state of Florida.

Far too many athletes who want a piece of the spotlight, and they deserve it just as much as the 4 and 5 star” players.

What makes Florida – and south Florida in particular – so impressive is the amount of football talent that goes way beyond the Power 5 and lower “D1” teams. The reason that thousands of colleges flock to Florida (before the pandemic) is to fill their rosters at every level – and that is what totally separates us from any state in the country.

With more recruiting fairs for smaller schools available several months out of the year, FSC, Division 2, Division 3, NAIA and every program that plays the sport nationally, is getting the chance to compete against those same football players who are considered the best of the best – and that is NOT up for debate. Not when six Plantation American Heritage football products were drafted in the 2021 NFL Draft.

When long snappers, kickers and punters are so important that they are selected by NFL teams, you tend to believe that the guy who kicked off, booted extra points and field goals is just a little more important to a franchise than anyone could have imagined.

Back in the day, kickers, punters and long snappers were an afterthought – unless, of course, they won a game or pinned the other team deep in their own territory. But the rules have changed and so has the landscape.

High schools and colleges are producing special teams’ players like never before – and the best thing – they are being recognized for it.

Enter Dan Lundy. A former Daytona Beach Mainland and University of Miami standout who has been teaching kicking and punting for several years, and when he saw the need to have additional showcase events to what appeared to be a crowded field, he thought it was the perfect time and the fit.

Last Saturday, Lundy brought his 4th Down University company south for a competitive showcase at Cardinal Gibbons High School in Fort Lauderdale. “The Battle of the Beach” was competitive and well run – with Cardinal Gibbons head coach Matt Dubuc and Laz from Bleechr providing the production and promotion of the event.

What this showcase was all about was to introduce many who never knew Lundy’s successful background, working with elite special teams’ performers. But after Saturday, they knew all about what to expect moving forward.

With some outstanding special teams’ performers on hand, several caught the attention with impressive performances. But at the end of the day, Lundy was setting the table for the future – as his events will also dot a landscape that is in need for exposure, competition and instruction.

As many of these special teams’ performers are used to huge events – where waiting around is usually the norm, “The Battle of the Beach” had limited numbers, but was loaded with talent – at every level.

Among those seniors who attended included Class of 2022 standouts Adrien Alfieri (K/P, Fort Lauderdale Cardinal Gibbons), who has truly continued to mature and gives the Chiefs a reliable performer.

Also, Boca Raton transfer Peyton Giersbrook (K/P, Deerfield Beach) has been around this off-season and is ready to make a statement this season.

Nova’s Benjamin Guevara (K/P), Daytona Beach Seabreeze standout Mason Motto (K/P) – and Viera teammates Jared Perdomo (K/P) and long snapper Austin Smith were impressive. All have been around at several events – and work with coaches all of the time.

The junior class also was well represented – with Cypress Bay newcomer Lucas Bisazza (K/P) showing why he will give the Lightning a weapon for head coach Rocco Casullo. Cardinal Gibbons long snapper Trey Dubuc has been one of the best in Florida and is receiving attention.

Other area performers include gifted kicking specialist Jeffrey Hernandez (Coconut Creek) and Cardinal Gibbons elite punter Christian Silverstein, who has been rated as one of the best in the country.

Recent Delray Atlantic transfer Robert Hammond (K/P) will be among the best in Florida for his class – as he also has been competing nationally as well. Fort Pierce Central’s Tyler Patterson is also an emerging kicking prospect, who has a strong and accurate leg.

Speaking about the future, Davie Western High sophomore Kristian Hobbs (K/P) is one to keep an eye on – as he showed off a 55-plus yard leg and has been one of the top competitors all summer. He will be a huge plus for head coach Adam Ratkevich and the Wildcats.

If you want to check out and of the action from the weekend or into the future, check Coach Lundy out at: https://4thdownu.com/ - or Laz at Bleechr: https://bleechr.com/

Class of 2025? Watch Out For The Incoming Freshmen

5 Class of 2023 south Florida Prospects On The Rise