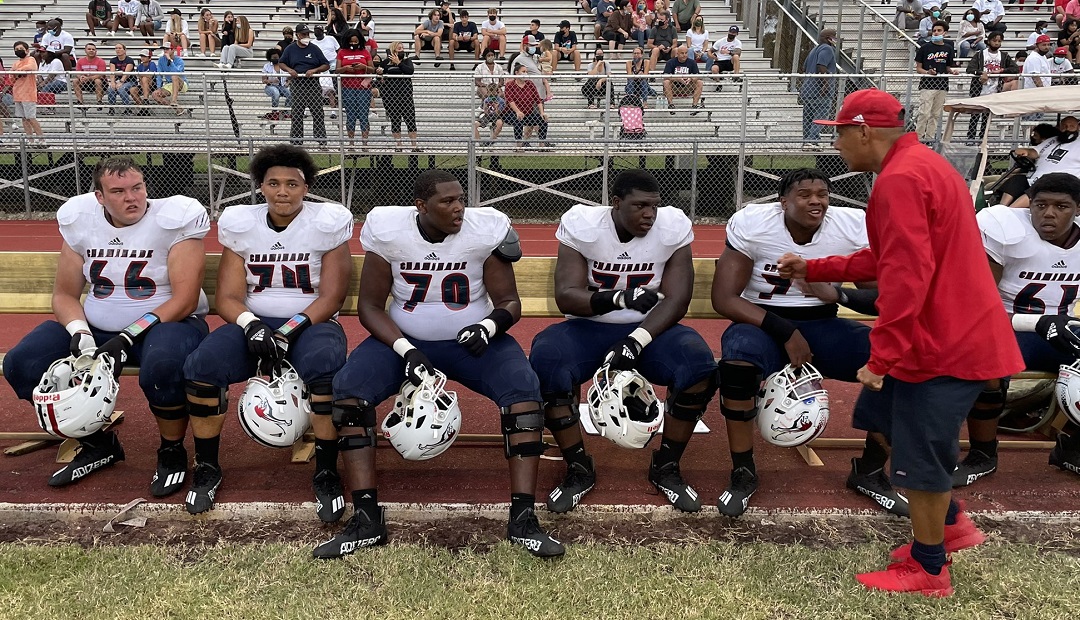 What an opening week of the 2021 season – with several south Florida programs having some games that will certainly impact this season.

From St. Thomas Aquinas – beating St. Frances Academy - to Miami Christopher Columbus winning in Georgia, it was a week that got the attention of fans throughout the state, and of course, the country.

As you will see in our Week 2 Top 20, several programs have moved around – while others are getting some of the spotlight for the first time.

St. Thomas Aquinas and Miami Central start out as 1-2 for the second week:

1. Fort Lauderdale St. Thomas Aquinas Raiders (7A, 1-0). The nation saw this program show why they should be considered one of the elite – beating St. Frances Academy on national (ESPN) TV. THIS WEEK: at No. 16 Plantation on Friday. NEXT OPPONENT: at trip to No. 8 Plantation American Heritage on Sept. 10.

2. Miami Central Rockets (5A, 0-1). Enjoying the week off, coach Roland Smith and his team got the St. John Bosco loss out of their heads. THIS WEEK: Las Vegas Bishop Gorman, Sept. 4, Naples at 8 p.m. NEXT OPPONENT: Will take on No. 14 Booker T. Washington on Sept. 10.

4. Hollywood Chaminade-Madonna Lions (3A, 1-0). Coach Dameon Jones showed the rest of the state that they are still the same program that is shooting for a sixth consecutive state championship appearance with a 30-13 win at 8A power Western. THIS WEEK: A trip to No. 8 Plantation American Heritage for a huge game this Friday, Sept. 3. NEXT OPPONENT: A very competitive road game against No. 5 Christopher Columbus, Sept. 10.

5. Miami Christopher Columbus Explorers (8A, 1-0). Make no mistake, this is a program that is very much in the race for a trip to state – with a convincing 42-27 win at Savannah Benedictine in Georgia. THIS WEEK: They will stay on the road to play a very impressive 8A Bartram Trail in the Jacksonville area on Sept. 3. NEXT OPPONENT: A home game against No. 4 Chaminade-Madonna on Sept. 10.

6. Deerfield Beach Bucks (8A, 1-0). After a thrilling 30-22 win over No. 20 Miami Edison, this program is ready to make a solid run. THIS WEEK: A huge trip to 7A power No. 12 Fort Lauderdale Dillard on Sept. 3. NEXT OPPONENT: A Saturday home game against Pompano Beach Blanche Ely on Sept. 11.

7. Miami Northwestern Bulls (6A, 1-0). After a tough kickoff classic loss to Venice, it was bounce-back time for this power – beating two-time defending 2A state champs Champagnat Catholic. THIS WEEK: Another home game at Traz Powell Stadium against No. 14 Booker T. Washington. NEXT OPPONENT: A road trip to nationally rated Bradenton IMG Academy on Sept. 10.

8. Plantation American Heritage Patriots (5A, 0-1).  Nobody expected this program to get off to an 0-1 start, but it happened in Naples last Saturday night, 29-21, to 8A Port St. Lucie Treasure Coast. THIS WEEK: Back home for a HUGE meeting with 3A power No. 4 Chaminade Madonna on Sept. 3. NEXT OPPONENT: Things do not get any easier – when they play host to No. 1 St. Thomas Aquinas on Sept. 10.

10. Miami Gulliver Prep Raiders (4A, 1-0). Playing on the road at 7A Bradenton Manatee, here is a team that showed how impressive they are going to be this season – winning, 20-7. THIS WEEK: A huge home game against No. 9 Miami Palmetto at 4:00 on Thursday. NEXT OPPONENT: A road game against TRU Prep Academy on Sept. 10.

11. Davie Western Wildcats (8A, 0-1). Even in the loss to Chaminade-Madonna, here is a program that showed – when things start to come together – will be a major force in 8A. THIS WEEK: The game against Hallandale has been postponed. NEXT OPPONENT: A home game against Fort Lauderdale on Sept. 10.

12. Fort Lauderdale Dillard Panthers (7A, 1-0). After a tough kickoff classic, head coach Tyler Tate and his football team needed a big win in the opener, and they got it, beating Boyd Anderson, 44-0. THIS WEEK: It’s a huge Friday night home game at No. 6 Deerfield Beach. NEXT OPPONENT: Another home game against Miramar on Sept. 10.

13. Miami Killian Cougars (5A, 1-0). Rebounding from a kickoff classic loss, Coach Derrick Gibson and his team opened with a big win at 7A Miramar, 20-13. THIS WEEK: A home game on Sept. 3 against Miami Norland. NEXT OPPONENT: Huge game against No. 9 Miami Palmetto on Sept. 10.

14. Miami Booker T. Washington Tornadoes (4A, 1-0). The Tornadoes got off to a great start with a 20-12 win against Miami Norland. THIS WEEK: It’s a Friday night game at Traz Powell Stadium against No. 7 Miami Northwestern. NEXT OPPONENT: A home game against No. 2 Miami Central on Sept. 10.

15. Hialeah Champagnat Catholic (2A, 0-1). The two-time defending state champs fell short against a tough Miami Northwestern team, losing, 35-13. THIS WEEK: A trip to Delray Beach to play American Heritage on Sept. 3. NEXT OPPONENT: A Sept. 10 game at No. 19 Monsignor Pace.

16. Plantation Colonels (6A, 1-0). It was one crazy week for head coach Steve Davis and his team. After the opener against Monarch was called off, the team found a game in South Miami, beating the Cobras, 44-7. THIS WEEK: A Sept. 3 game at home against No. 1 St. Thomas Aquinas. NEXT OPPONENT: After a week off, it’s another home game on Sept. 17 against Coconut Creek.

17. North Miami Beach Chargers (5A, 1-0). With junior QB Mahki Rolle accounting for 324 yards and 4 TDs, coach Jeff Bertani and his team rolled to a 31-18 win over rival North Miami. THIS WEEK: A trip to Sanford on Sept. 3 against defending 8A state champion Seminole. NEXT OPPONENT: After a week off, a trip to Hialeah-Miami Lakes will play host on Sept. 17.

18. Homestead Broncos (7A, 0-1). Coach Phillip Simpson’s team had their chances, but fell short to 8A contender Miami Palmetto, 21-19.  THIS WEEK: The battle for bragging rights against South Dade on Sept. 3. NEXT OPPONENT: An away game against Miami Jackson on Friday, Sept. 10.

19. Miami Monsignor Pace Spartans (4A, 0-0). Having the opener called off because of Covid, here is a team that definitely is looking forward to getting this thing started. THIS WEEK: A home game on Friday, Sept. 3 against 2A Dade Christian. NEXT OPPONENT: It’s No. 15, 2A power Champagnat Catholic on Sept. 10 at home.

20. Miami Edison Red Raiders (3A, 0-1). Despite coming away from Deerfield Beach with a close loss, this is a program that is optimistic about this season. THIS WEEK: A home game on Thursday, Sept. 2 against Pompano Beach Blanche Ely. NEXT OPPONENT: The team will take off before a Sept. 18 game against Miami High.