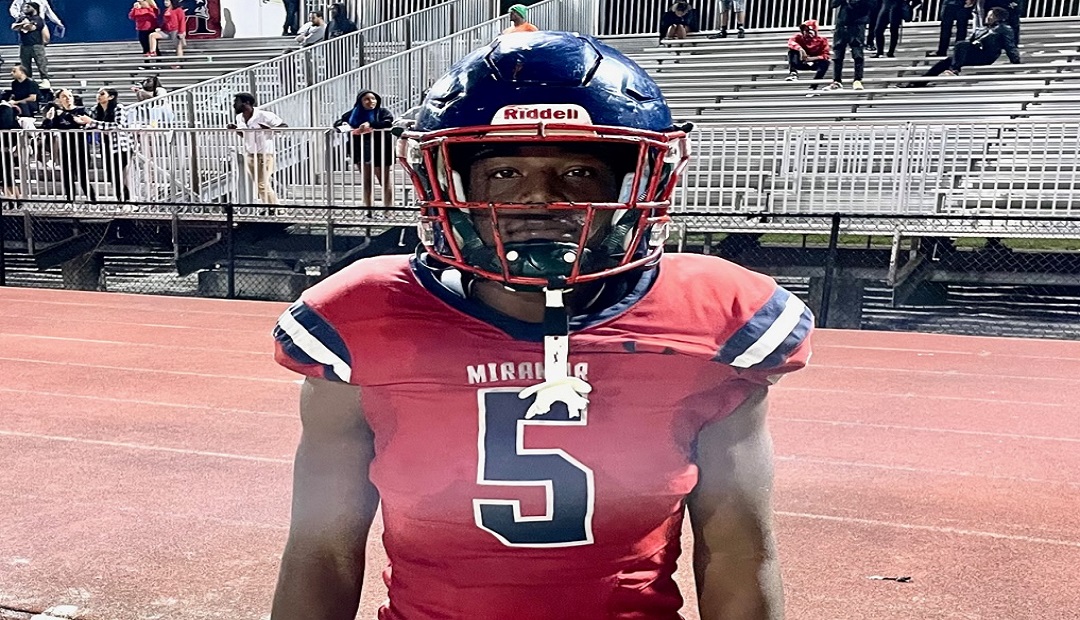 As we do every Wednesday, during the course of the year, we bring you five prospects from Miami-Dade and Broward Counties who are standing out.

While some are below the radar, others have already been discovered, but deserve this spotlight.

Because we are now in the Region Finals of the state football playoffs we will once again bring you prospects who have made an impact since the regular season ended.

Here are five quality players who helped their respective teams ready this round:

2024 – Jeff Bandy, CB, 5-10, 160, Miami Christopher Columbus. The younger brother of one-time Christopher Columbus and University of Miami standout Trajan Bandy, this young man has certainly carved out his own path – and this season as the Explorers head to the 4M Region finals – he is one of the reasons why. Three interceptions last week against Miami Palmetto along with key plays all season long. His ability to come up with a big play has thrust him into a spotlight, and this is just his junior season. He work in the classroom has also been noticed as well.

2023 – Nate Henry, RB, 5-9, 175, Miramar. Ever since coming over from Miami Central, all this quality back has done is lead by example and give the Patriots an opportunity to post a 10-1 record as they head to Homestead for a 3M Region final. He is quick, strong and powerful and is not easy to bring down. Adding balance to this teams’ offense, he is many reasons for the success of an offense that has average over 30 points all season long. For a program long known for it “Dark Side Defense”, the offense has been a spark and Henry has been out front.

2023 – Harlem Howard, DB, 6-1, 170, Pompano Beach Blanche Ely. The great thing about the recruiting process, especially in south Florida is the competition that teams and athletes play are always going to elevate the play of every athlete. While many have already watched this playmaker perform, they all admit that there are few better, and if you ask anyone who has competed with and against him, they single out his skills and ability to limit any offense he goes up against. Big time prospect, who is ready to lead the Tigers into Friday night’s 3M Region final against national power Fort Lauderdale St. Thomas Aquinas.

2023 – Blake Murphy, QB, 5-11, 175, Plantation American Heritage. We all know by now that this quality football talent spent the better part of last season injured and had to watch from the sideline, but he devoted this past off-season to getting better and has put himself in a position where his Patriots have a legitimate shot to win it all in 2M. He showed from the very beginning of the 2022 season against California power Los Alamitos that he was back and better than ever before. As he leads his team into the Region final against Fort Lauderdale Cardinal Gibbons, he is indeed one of the best in south Florida.

2024 – Glenn Smith III, WR, 5-10, 165, Miami Southridge. Talk about an under-the-radar talent. Unless you follow this game closely, here is a standout that many had never watched before – but seeing him live twice this season – and many times in the off-season – here is a gifted football prospect who has speed, athletic ability and a skill level that is only getting better. On a team that lost in the 3M Region semifinals last week, here is one of the shining stars the Spartans had on a talented and improving roster.