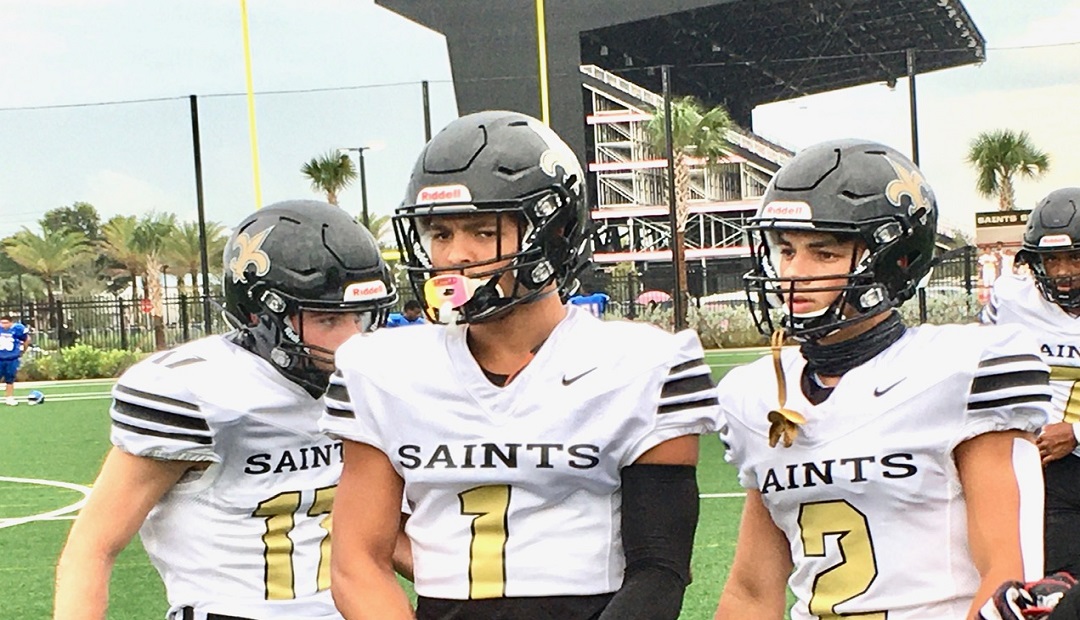 Thanks to a few south Florida high schools, last Friday night turned out to be special – in many ways.

When Miami Belen Jesuit said that there would be NO media or recruiting services allowed at the game, the first question was why? The second thing is why would you NOT expose your student/athlete who has been hidden away for the past six months?

While we cannot answer the rules others set – when you have fans in the stands, but not allow in media, which are always more than 60 feet from one another and the players – rather than the “mandatory” six feet, it’s hard to figure.

Belen Jesuit wasn’t the only school – taking extra precautions. Monsignor Pace originally had that mandate that media would not be let in, but later changed – after many had altered their plans for that week.

With Belen Jesuit and Monsignor Pace both in the rearview mirror, it was time to relive some history.

This practice facility – with this structure towering in the distance – brought back memories to the Fort Lauderdale Strikers and back when it began in the 1970’s. It also brought back those amazing games that took place at Lockhart Stadium. How many football stars made a name there.

Originally designed in 1959 for high school sports, the stadium's long-standing soccer connection began in 1977 when it became the home venue for the original Fort Lauderdale Strikers of the North American Soccer League In 1998, it was refitted for soccer to house the Miami Fusion in the Major League Soccer. It was also the home stadium of the FAU Owls football team from 2022-2010.

The first football game on this property since Dillard and Blanche Ely closed things in 2016.

To see football on this space of real estate – where more plans will include a parking garage and restaurants that would make that parcel of land extra special.

Another thing that was discussed about this new facility – which Deerfield Beach and Stranahan will be in action, was putting the state championship games in the large venue.

Hotels, restaurants are plentiful and the access from I-95 (blocks away) and the Turnpike (3 miles away) make it the perfect destination.

For the second straight week, TRU Academy had little problem with their opponent, but with defending 2A state champion Hialeah Champagnat Catholic and the national power in 7A St. Thomas Aquinas.

With several prospects who are committed to play at the next level, the Saints (2-0)

This game was more than a 61-0 win for TRU Prep Academy (2-0). What it was once again is a chance for prospects to jump on the radar and get the film needed.

Difference makers so far in this brief season include: seniors Jeremy Acosta, NG, Emile Aime, LB, Nygel Ashley, CB, Shai Kochev, LS, gifted linebacker Hayward McQueen and one of the true talents in this class so far - Vincent Pagano, who has shown plenty for the Saints.

Also, juniors David Espino Jr., OT, Justin Fevrier, OL/DL, and outside linebackers Knight Nakanishi and Dominic Mathis. And seniors, highlighted by the No. 1 receiver nationally in Brandon Inniss, and receiver Ben Sherota, who has made plenty of plays.

Palm Glades is in a rebuilding phase this year – with several young prospects.

For the past 50 years, we have spent more time on football fields than anyone in the country. From games to practices, camps, combines and 7-on-7 events, nobody has evaluated more football talent than we have – we will remain steadfast to promote all south Florida’s high school football prospects. Follow us on Facebook (Larry Blustein- SFHSports) and Twitter (@SFHSSports - @larryblustein). Contact us at: This email address is being protected from spambots. You need JavaScript enabled to view it..

5 Class of 2023 Prospects To Watch This Summer

Northwestern Looks To Rebound This Evening