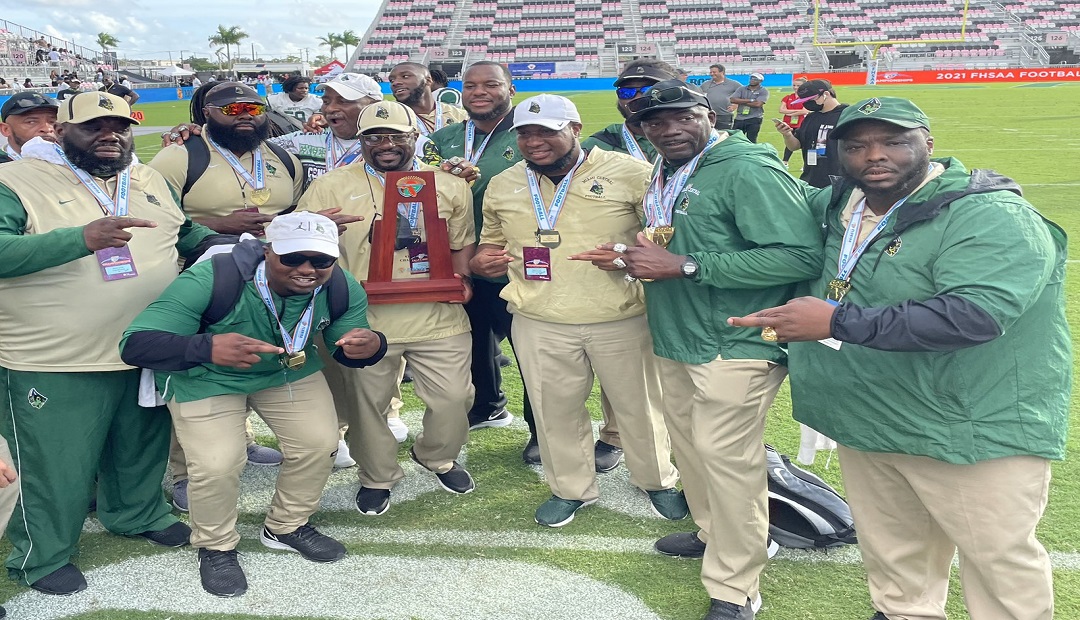 Well, the season has come to an end – and while south Florida didn’t have the representation that it is used to – four state champions and one runner up will have to do.

As we reflect back on the past two weeks during the state championships, the one thing still remains in Miami-Dade and Broward Counties, the talent will always be there – and colleges and universities nationwide know it very well.

This season had those what ifs for plenty of programs in the competitive two-county area. St, Thomas Aquinas really had the biggest what if – after convincingly beat national power St. Frances Academy, the Raiders lost to eventual 6A state champion Tampa Jesuit, while looking shaky in the title game, they still won and finished nationally rated.

That game with Tampa Jesuit was NOT scheduled at the start of the season, but because of the RPI rating and points needed, the Raiders had to play that game because Plantation cancelled its contest because of Covid.

Being real, St. Thomas Aquinas – with its third straight 7A state title – could have easily been in the top three right now after St. Frances Academy beat IMG in Bradenton.

Miami Central also has that what if scenario. After a slow start against national California powerhouse St. John Bosco, the very next game saw them drop a heart-breaking one-point decision to Las Vegas Bishop Gorman in Naples, and that was a huge what if moment – as the Gaels went on and won yet another Nevada state title. The Rockets won the state title for the third straight year.

While Miami Central and St. Thomas Aquinas certainly have their valid what if moments, maybe Chaminade-Madonna had perhaps the largest what if season.

The only loss came in Week 2 against a Plantation American Heritage team – that at the time – was rated among the top 25 nationally, and it was a two-point setback.

When looking at this year’s Top 20 local poll, we have kept up with the games each and every week – and moved teams up and down.

There is no getting around the fact that the first three finishers this year could matchup with ANYONE in the country, as Chaminade-Madonna showed in last week’s post-season win, after a fourth 3A state title in five years.

With no change over the past month, here is this year’s final ranking. Great season!

1 Miami Central (5A, 12-2). The Rockets and legendary head coach Roland Smith were once again impressive down the stretch this season – and despite two early season losses to national powerhouses, they stayed strong and beat Merritt Island, 49-14 to win their 8th state title.

2. Fort Lauderdale St. Thomas Aquinas (7A, 14-1). This season, while it was very successful for head coach Roger Harriott and the Raiders, came down to a second week loss on the road to eventual 6A state champion Tampa Jesuit by three in a game that was scheduled a few days earlier because of Covid.

3. Hollywood Chaminade-Madonna (3A, 13-1). Winning a state title two weeks ago was not enough for head coach Dameon Jones and the Lions as they traveled to Las Vegas to play in the Geico Bowl series and beating Arizona 6A state champion, Gilbert Highland, 35-24.

4. Fort Lauderdale Cardinal Gibbons (4A, 11-2). For the second straight year – and third in the past four seasons, head coach Matt Dubuc and the Chiefs brought home a state title – knocking off Cocoa, 21-19.

Florida Athletes Shine At Under Armour Next Football Camp

Miami Edison Is Back Again And Ready To Contend