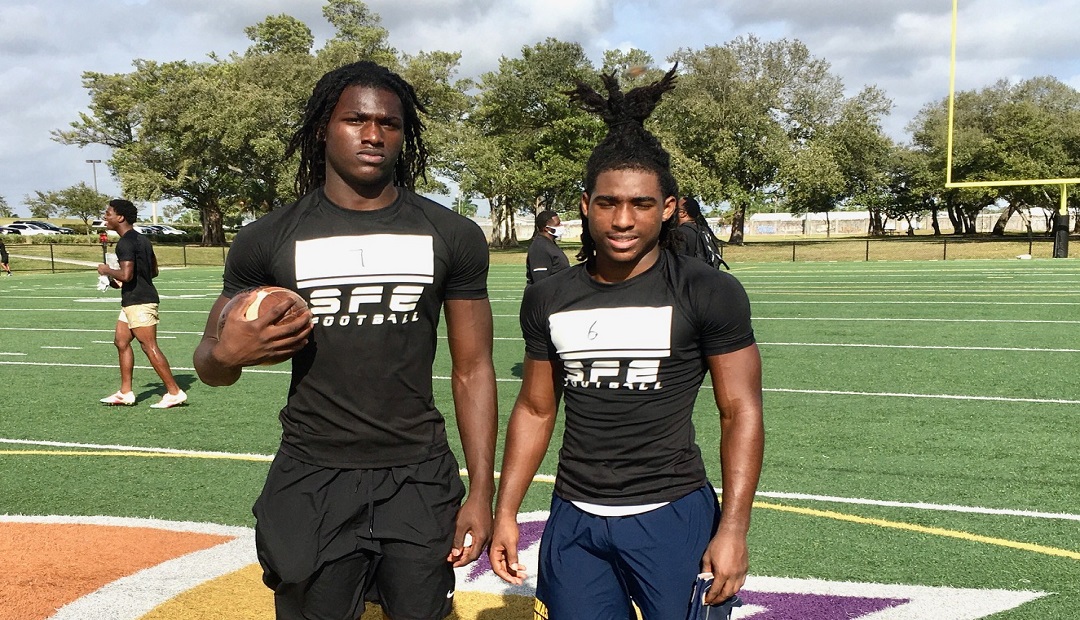 Whether many across the country want to acknowledge it or not – the off-season 7-on-7 teams we see now was actually started in this area.

Back in the 1980’s, area high school coaches got together and competed in “flag football” events that several took part in.

While that was more of the scholastic version of the game – with actual school teams participating – the 7-on-7 that we know today was something that happened in the past 15 years – and it grew across the country, landing in south Florida with one of the most recognizable brands – the South Florida Express (SFE), hosting the annual tryout, bringing in players from as far away as Jacksonville and as close as North Miami Beach.

SFE was the first to take a step out on that ledge, back in the day, and as they became successful, and more and more of the top names played with them, it was indeed something that made news nationally – with championships and alumni making for quite a calling card.

Over the years, high-profile brand names such as The Fire, Immortals, Strong Arm, Hard Knocks and so many others have emerged and fielded amazing teams – with The Fire’s founder Dennis Marroquin bringing home some national titles.

Now, well over a decade later, the entire state of Florida – including Jacksonville, Tampa and Orlando have fielded nationally-recognized teams that feature some of the nation’s elite prospects.

This past weekend’s SFE tryout didn’t attract its usual hundreds and hundreds who came out – many without a prayer of making these coveted roster spots – but what it did do, for those looking to impress the coaches, was provide all who came for the two days to more than showcase their abilities.

This is a team that should be one of the best in the country – with potential quarterback prospects Blake Murphy, eighth grader Ennio Yapoor (Champagnat Catholic), Colin Hurst (Western), Dylan Rizk (Fort Lauderdale Cardinal Gibbons) and Dylan McNamara trying to turn some heads.

SFE should also be strong with some impressive receiver – some not at the tryout, but others like St. Thomas Aquinas receivers Corey Reddick and Camden Brown will be two that will not only be huge during 7-on-7, but for the two-time defending state champion Raiders.

For the past 51 years, we have spent more time on football fields than anyone in the country. From games to practices, camps, combines and 7-on-7 events, we have been fortunate to watch thousands of football prospects. In the New Year, we will remain steadfast to promote all south Florida’s high school football prospects. Follow us on Facebook (Larry Blustein- SFHSports) and Twitter (@SFHSSports - @larryblustein). Contact us at: This email address is being protected from spambots. You need JavaScript enabled to view it..