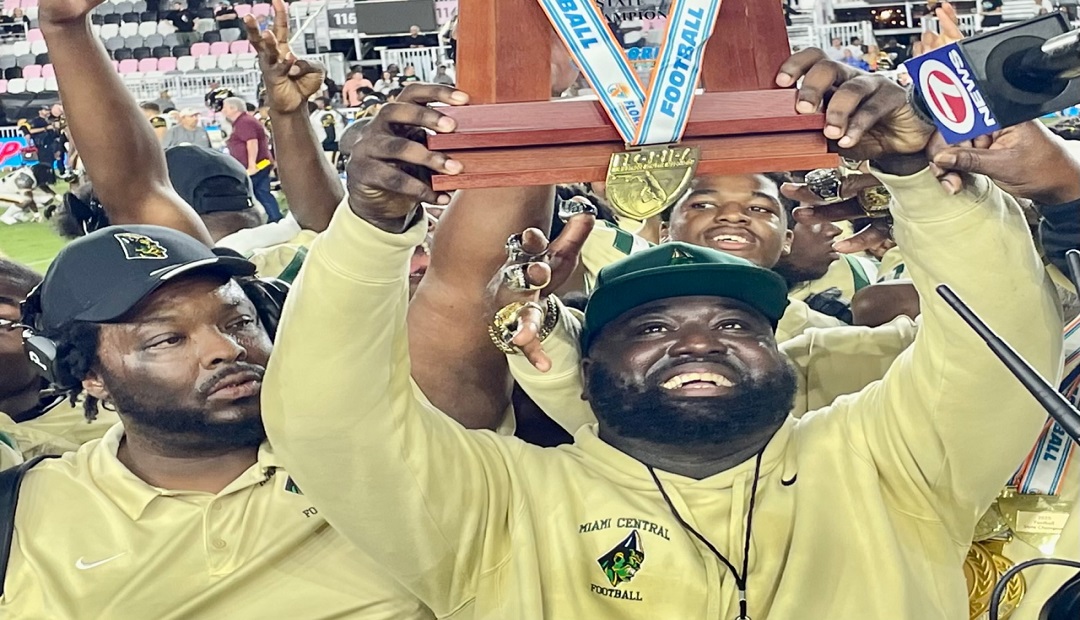 After a brief hiatus from the state championships, head coach Roland Smith and his Miami Central Rockets appear to be on top once again in 6A.

After a convincing shutout win over Lake Minneola, the future remains bright on 95th Street.

With Fort Lauderdale Dillard’s improving squad, building toward the level where the Rockets have been for many years, it looks early on that Central will once again be the favorite to return to the 6A state championship.

Yes, it’s a long way off and a trillion things can happen – like we have all found out this year – but you have to face the fact that Coach Smith and his staff have the kind of team the most competitive athletes want to play for – and that is why this train does not look like it will stop anytime soon.

As some very big shoes leave this program and move on to a fantastic next level, there is always going to be that burning question: will this team have enough talent to compete once again?

The answer is yes – and with some key pieces coming back along with some new faces like every year.

Leading the way in the Class of 2022 is All-American linebacker Wesley Bissainthe. Easily one of the best in the country, this impressive player has everything to you are looking for in an all-around athlete.

He is big, quick and extremely smart. He also is a standout basketball player for the Rockets as well.

In addition to Bissainth, the Class of 2022 is loaded with talent – and of course – game-changers on defense including: Solomon Charles Pierre (LB), Dante Hunte (LB), Aramis Soto (DL) and Nicolas Vargas (CB).

The reason why this program owns a 20-4 record with two state titles the past two seasons is because of the quality coaching and impressive athletes that continue to pour in every year.

Very few programs in south Florida boast Class of 2023 standouts such as defensive lineman Rueben Bain, quarterback Keyone Jenkins, receiver Lamar Seymore, and defensive backs Antwon Shepard and Shawn Smoak. Having a group of potential Power 5 prospects on the roster as sophomores, only adds to what this program has been able to build through the years – and decades.

Unbeaten Florida Christian Has Been The Story In 2021