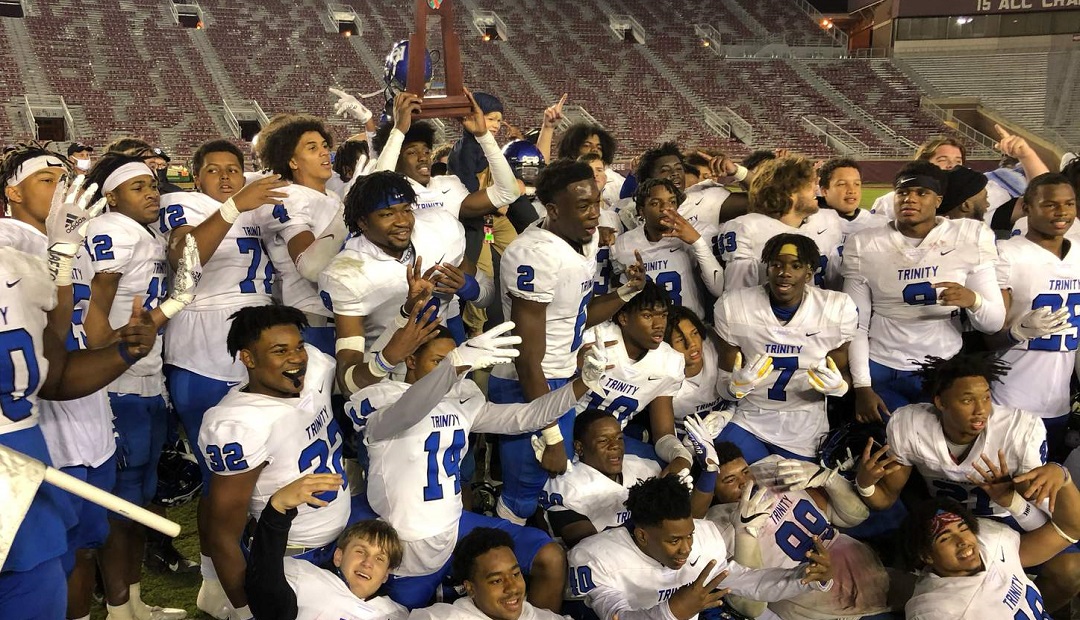 TALLAHASSEE – As head coach Dameon Jones and his Chaminade-Madonna Lions took a 16-0 halftime advantage on Wednesday night, he knew that the three-time defending state champions would need to stay sharp for the final 24 minutes.

What happened in the 3A state title game at Bobby Bowden Field at Doak Campbell Stadium is the Jacksonville Trinity Christian Conquerors never gave up – and kept coming until the end – and that end was a 25-22 win over the Lions.

In a year where so much has transpired, you figured that a two-plus touchdown lead would NOT be enough on this night.

On their fifth consecutive trip to the state title game, Chaminade-Madonna let one get away – as a number of seniors leave on a tremendous run of three state championships and plenty of recognition.

This program, which relied on its defense much of the year, failed to hold the 12-1 Conquerors out of the endzone late in the game – and finish the year 8-2 – with plenty coming back for the 2021 season and another run at the state title game.

The Lions took a quick 2-0 lead when the Conquerors snapped the ball over the punter’s head at the 8:40 mark of the first quarter.

When University of Miami signee Thad Franklin took it in from the 2 with 2:35 left in the opening quarter, Chaminade-Madonna took a 9-0 lead.

When Reid stripped the ball and took it in from 51 yards out the Lions had switched momentum with 1:49 left in the first half and a 16-0 lead.

Trinity Christian finally got on the scoreboard with 8:43 left in the third quarter when Kaleb Killian took it in from the 2 – as the Conquerors came out and made it 16-7 on the very first drive of the second half.

As the final quarter started, Trinity Christian inched closer when they drove inside the Lions’ five and came away with a 19-yard field to cut the lead to 16-10 with 10:33 left on field goal by Caleb Stevenson.

When Ja’Cory Jordan found University of Florida-bound Marcus Burke, the Conquerors had the Lions’ attention. They led for the first time, 17-16.

With that streak on the line, this Chaminade-Madonna team had no quit. Franklin’s 1 yard run put the Lions back on top, but the state champs could not hold on – leaving a state championship game for the first time in four years without the top trophy.

Trinity Christian would not be denied – as they took back the title when Jordan hit Burke for the game-winning score.

2022 Receivers Continue To Catch On