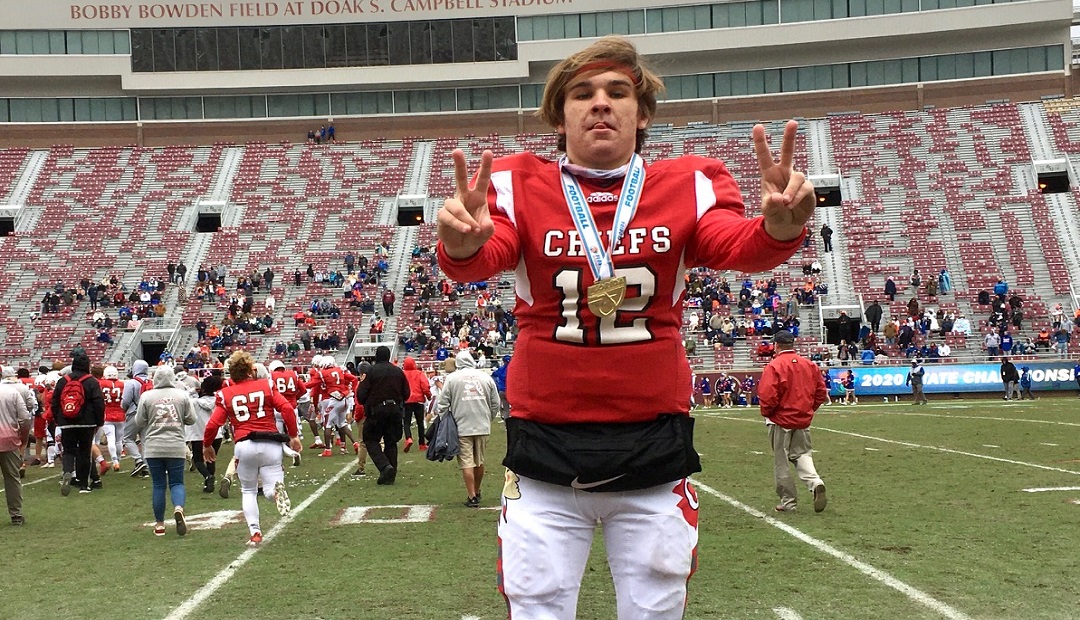 TALLAHASSEE – Two years ago, Cardinal Gibbons quarterback Brody Palhegyi headed to the state championship in Orlando against North Marion as a backup and lead the Chiefs to a 5A title.

On Thursday, he was a starter as the Chiefs rolled to a 4A Florida High School Football state title with a 35-21 win over Jacksonville Bolles at Bobby Bowden Field at Doak Campbell Stadium.

What Palhegyi did in his final game in high school was shred the Bolles defense for 358 yards and 4 TDs. He also chipped in on the ground with 81 yards.

The Bulldogs welcomed the Chiefs to the 4A finals from the start – when heralded junior running Kade Few went 60 yards for a 7-0 lead – at the 11:15 mark.

The Chiefs opened the second quarter with a four-yard scoring pass from Palhegyi to sophomore receiver Jesse Anderson to tie the game at 7 with 11:54 left in the first half.

The Chiefs went ahead with 6:33 left in the first half when Palhegyi found Clemson-bound receiver Troy Stellato from seven yards out and a 14-7 advantage.

The Chiefs took a 21-7 lead at the 8:41 mark of the third quarter when Palheygi tossed another scoring pass – this time to Kamari Moulton from 32 yards.

It was Moulton once again with 6:51 left in the fourth quarter on a four-yard run and a 28-7 lead.

The Chiefs extended the lead to 35-7 when Stellato was on the receiving end of a 9-yard pass from Palheygi.

Bolles added two late scores in the fourth quarter. One was on a kick return by David Ellis from 75 yards. The other came at the :47 mark on a 1-yard run by Frew, who finished the game with 128 yards and two scores.