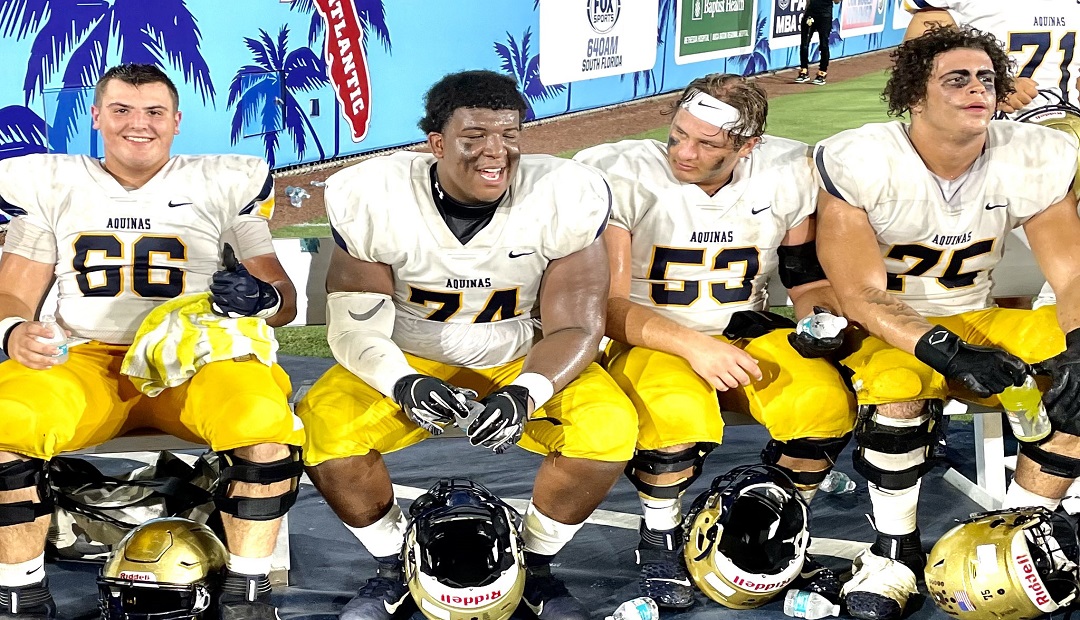 For much of the past year, if you attended to Cardinal Gibbons High School and were a member of the football program, you felt pretty good about your program and the future.

A win during the Covid season against head coach Roger Harriott and St. Thomas Aquinas and a second 4A state title was enough to put your chest out and do a little bragging. Well, all that changed on Saturday night before over 7,000 fans at FAU when the Raiders did what they have done for much of the past 30 years – dominate the Chiefs/Redskins.

Once thought of as a rivalry never really was. The Raiders dominated the series and that brought an end to the yearly matchup. Last year it was rekindled during a season where both teams were in search of games. After the Chiefs and head coach Matt Dubuc won for the first time in series’ history, each program went its own way and captured state titles.

Fast forward to this year, and while games were needed, this was a contest that was more of a BCAA (Broward County Athletic Association) event than anything else.

What the 39-14 decision did was perhaps bring this game to an end. It does not need to be played and shouldn’t be. There is no need to go into it all, but the Raiders need to play a program like Miami Christopher Columbus every year to create a more local rivalry outside of their region.

It was a game that brought plenty of people together for a pre-game tailgate and a contest in a “big time” setting, which was all fine.

The 7-1 Raiders tuned up for a huge district showdown with unbeaten Fort Lauderdale Dillard – while the 4-2 Chiefs will head out to play one of the top teams in the state – Venice – next Saturday afternoon at 1:30.

For much of the past three years, Miami Gulliver Prep had not lost a game in the regular season. That ended on Friday night.

One of the top 4A programs in the state, the Raiders played a program that has been there – and has more than done that.

Chaminade-Madonna has gone to the 3A state playoffs five straight years, winning three titles. They had already beaten Georgia’s No. 1 team, Buford, and took care of the defending 8A Florida state champion Sanford Seminole – as well as Christopher Columbus and Western, so head coach Dameon Jones and his Lions were ready.

With each team standing toe-to-toe for over three quarters, the 6-1 Lions came on with a strong finish and beat a quality program, 31-16.

Going into last Thursday night’s district title game at unbeaten Doral Academy, Homestead head coach Philip Simpson and his Broncos were being doubted. That was a huge mistake!

With FSU head coach Mike Norvell on hand, the Broncos moved to 6-1 with a convincing 47-6 win over head coach Eddie Delgado and his very young Firebirds, who are very much alive in the 7A playoff picture.


DR. KROP HAS THE RECIPE FOR SUCCESS

You have to give it to Dr. Michael Krop High head football coach Tom Caporale and his football team.

With last Friday’s 34-24 win over Miami High, the Lightning captured their first district title in many years – and how they did it should be a major lesson to those programs who are struggling now.

What this program did, after watching this program nearly hit bottom with loss after loss each week, was go independent and build from there.

What the Lightning did in those years as an independent teams was to win 21 games, bring home a title and start to attract more players who wanted to be a part of that winning. Against Miami High, this team showed how the process can work, and they are on a roll.

THE REST OF WEEK 8