Today Is A Huge Round For south Florida Teams 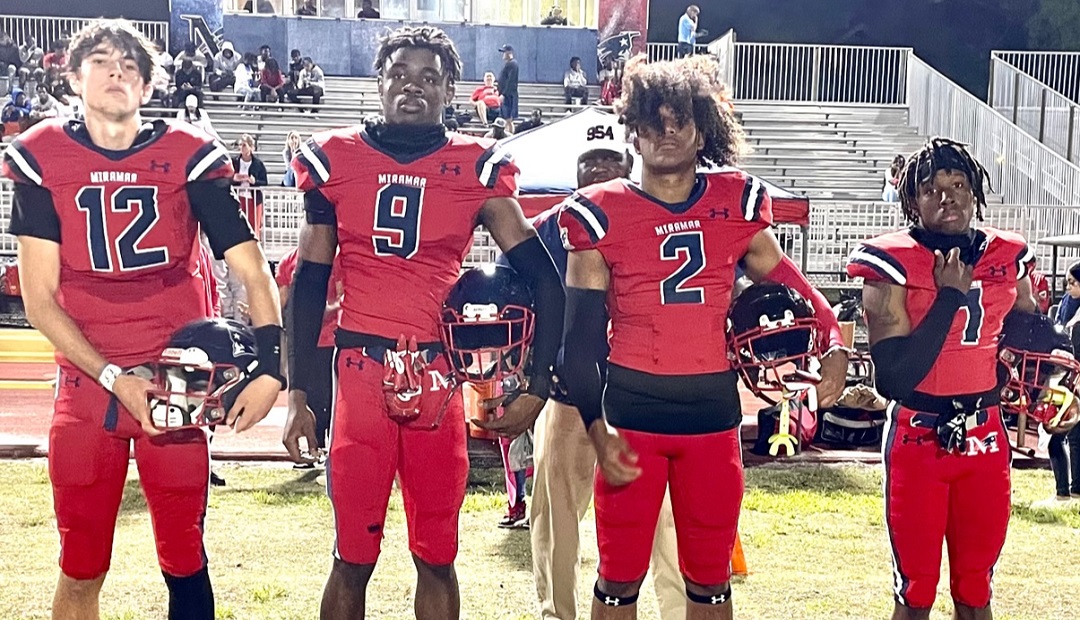 In just a few weeks, several south Florida football teams will have the chance to play for a state title.

When that time arrives, they will all look back to this week – Thanksgiving weekend – when 11 Miami-Dade and Broward County football programs will have the chance to move one step closer to playing for that coveted state title.

After a great Thanksgiving meal and a special practice, 11 area schools will pack it in for the year while others will move on to the next round.

Here is a look at the way things stack up today and this evening:

No. 3 Doral Academy (8-4) at No. 1 Miami Christopher Columbus (11-1), Tropical Park, 7:00. Another game where these two programs will meet for the second time this season. The Explorers have been playing lights out, losing only to No. 1 Miami Central in a game that they had their chances to win after a great comeback. Even though the Firebirds were soundly beaten in the first meeting with the Explorers, they have really been playing much better since that game. Christopher Columbus is a favorite to not only win tonight but take the 4M state title.

No. 3 Pompano Beach Blanche Ely (10-0) at No. 1 Fort Lauderdale St. Thomas Aquinas (11-0), 7:30. The Raiders are in this position just about every year – while the Tigers are returning to this game for the first time in many years. Everyone knows that the three-time defending state champions have a huge edge, but as we have found out, anything can happen.

No. 2 Miramar (10-1) at No. 1 Homestead (9-2), Harris Field, 7:30. The Broncos were in this situation last year and failed to come through and will be at home for a contest that appears to be the best matchup of all the games. While Homestead has been tested throughout the year, this is easily the Patriots’ biggest test. They did beat district champion Miami Southridge last week, but that was last week and they are on the road with more balance than they have had in a long time.

No. 2 Fort Lauderdale Cardinal Gibbons (11-1) at Plantation American Heritage (11-1), 7:30. One of three rematches that took place earlier in the season when the Patriots took care of business on the road, 21-2. Both teams are used to being in this round, and while the Chiefs are two-time defending state champions, their work is truly cut out for them on the road.

No. 3 Miami Norland (9-2) at No. 1 Miami Central (11-0), Traz Powell Stadium, 7:30. This is yet another one of those games that was played earlier this season and the Rockets totally dominated the surprising Vikings. But as confident as this impressive football team is, keep in mind they beat rival Miami Northwestern, 34-30, after beating the Bulls by 28 during the regular season. The Vikings have a better defense here late in the season but understand that while they are looking to win this game, their opponent has their eye on a national title which many feel they will deserve!

No. 2 West Palm Beach Cardinal Newman (11-0) at No. 1 Hollywood Chaminade-Madonna (9-0), 7:30. Believe it or not, here is a game that many had predicted would happen before the season started. While the Crusaders are looking to pull the upset with their impressive team, the Lions truly feel that they have the best team in the country and have played an early season schedule that backed up the talent they have. Much like the Miami Central game, the Crusaders are playing for the major upset while Chaminade-Madonna has national title hopes.

No. 4 Miami Palmer Trinity (6-5) at No. 3 Miami True North Classical Academy (8-3), Tropical Park, 3:00. When the season began these two teams were looking to have a solid season and build on their growing programs. Fast forward 12 weeks and they are both playing for an improbable Region title. The Titans have played some amazing football down the stretch while the Falcons are hoping to use the upset win over Miami Archbishop Carroll as a springboard today.

SPRING FOCUS – Expect Christopher Columbus To Be In The Mix Again