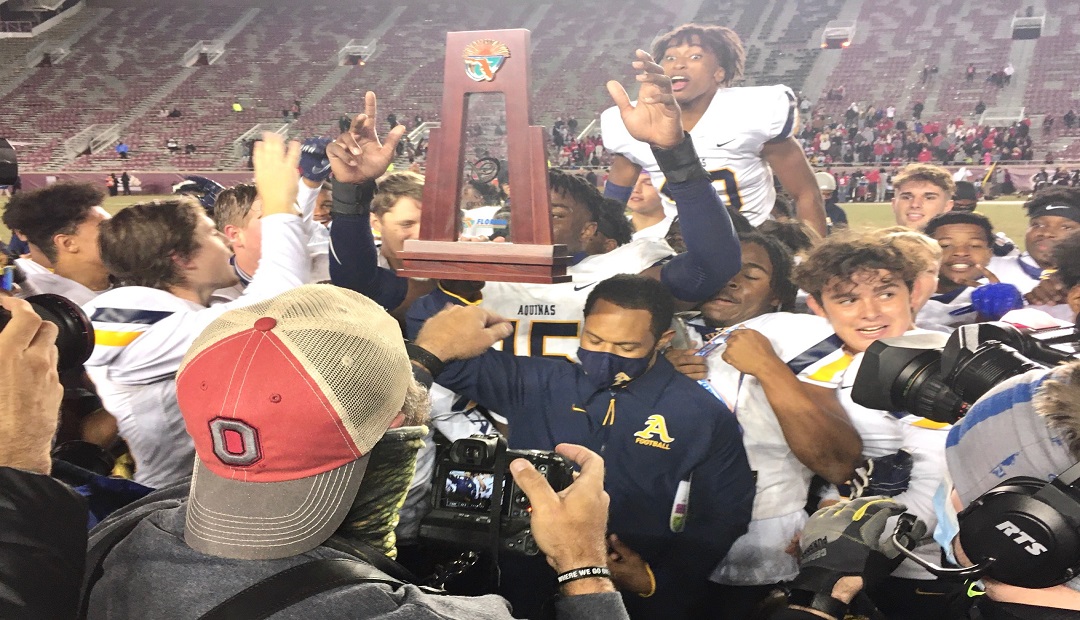 A few weeks back, Max Preps came out with the programs that they figured would be in the mix nationally.

Among those programs were south Florida teams that many believe could easily be in the mix for a mythical national title.

What has been learned in the past year is that if you do not turn up the schedule volume, your chances of being in the mix nationally will be slim.

But this year is much different – as the area powers will indeed play challenging schedules that will allow them to remain in the hunt.

When Jeff Fisher and the High School Football America people put out their Top 300 National listing, many Florida and south Florida teams were among that elite group.

Led by St. Thomas Aquinas at No. 4, there were 35 programs in the sunshine state among the top 155.

The Raiders will have a challenging schedule with some new faces for the 2021 season.

In addition, Bradenton IMG Academy (No. 5), Coach Pat Surtain’s Plantation American Heritage Patriots (No. 18) and Roland Smith and Miami Central at No. 22 are also elite teams.

Central, which has won the last two 6A state titles, will play John Bosco, Ca., Las Vegas Bishop Gorman and rival Miami Northwestern in three of the first four weeks.

American Heritage is the team that the Rockets are going to need to beat to get to the state tournament this year. The Patriots are loaded and will travel to New Orleans as well as compete against some impressive Florida programs.

Defending 4A state champion Cardinal Gibbons is loaded with talent and will be tested as well. Head Coach Matt Dubuc and the Chiefs will see Venice, Gainesville Buchholz, American Heritage and St. Thomas Aquinas. They check in at No. 28.

Miami Northwestern, which was derailed from a fourth straight 5A state finals appearance, will be able to develop talent and still make plenty of noise in 6A under head coach Max Edwards.

Missing out on a fourth straight state title a year ago, head coach Dameon Jones and the Chaminade-Madonna Lions are loaded and are definitely ready to resume their 3A dominance.

With games against defending 8A state champion Sanford Seminole and many others, this is a team that will be ready for anyone in their classification in 2021. They are 46.

After an 8A state title in 2019 and a Tri-County title last season, beating Deerfield Beach – head coach Dave Dunn and his Christopher Columbus program are going to be among the best in the state.

Miami Palmetto, after a tremendous run last season under head coach Mike Manasco, will start the season nationally rated at No. 151.

Coach Gerald Cox and his Miami Booker T. Washington football team will open at No. 153 with one of the most challenging schedules around.

Many could be underestimating No. 193 Deerfield Beach this coming season. The Bucks ended strong in the Tri County championships against Columbus and are loaded up under veteran head coach Javon Glenn.

The Miami Edison Red Raiders have added some quality pieces and come in at No. 194 to start the season under head coach Luther Campbell.

There are some really good football teams in the Sunshine State – as we get the chance to watch each season.

Here are some who also made this pre-season listing:

No. 45 Jacksonville Trinity Christian is going to be tough to beat this coming season. After a major upset in the 3A state finals against Chaminade-Madonna, the Conquerors are now 2A.

No. 71 Sanford Seminole. An unbelievable season in 2020 will certainly pave the way for another run. This has been a top 10 team in Florida for a minute.
No. 73 Orlando Jones. The Tigers have been one of the top programs the past few years – and are loaded up again.

No. 86 Orlando Edgewater. Two straight trips to the 7A finals and a solid team once again. The Eagles are well coached and a favorite to get back to the state finals.

No. 91 Venice. The happiest man in America is head coach John Peacock, St. Thomas Aquinas is not in the region and the 8A Indians can cause problems this coming season – with a very talented team.

No. 92 Cocoa. Despite getting hammered by Cardinal Gibbons, head coach Ryan Schneider and his team has talent.

No. 96 Tampa Jesuit. Had Plantation American Heritage on the ropes until the final field goal. This may be the most underrated team in the state!

No. 106 Rockledge and head coach Wayne Younger have been knocking at the front door for a few seasons, and has the talent to do it again in 2021.

No. 111 St. Johns Bartram Trail is yet another one of those programs that heads into the season thinking playoffs – and this year will not change.

120 Niceville is hidden in the panhandle and rarely gets the publicity they deserve, and with some quality athletes coming back, this will be another special year. Can they get over the hump?

129 Valrico Bloomingdale was 12-1 last season before St. Thomas Aquinas brought them to earth. Do the Bulls have enough to run it back in 2021?

149 Port St. Lucie Treasure Coast had a magical season that ended with a tough loss to Miami Palmetto. Do the Titans have enough for a repeat? Many holes to fill.

161 Apopka is a hard luck team the past two seasons – with enough talent and coaching to have won both years. They are loaded up again with playmakers.

169 Lake Minneola is coming off a magical season – and a first ever trip to the 6A state finals. Even though they lost to Miami Central, this is a program that has some impressive talent.

180 St. Augustine Another program that continues to get close with impressive athletes. The talent is in place and this group will have another opportunity in 2021.

183 Palmetto has had a tremendous program the past three season – and over the past two years – they were ousted by eventual state champion Miami Central. This is a very athletic team.

188 Vero Beach has been in the playoff mix for as long as anyone can remember. Coach Len Jankowski has the Indians stacked up and ready for another playoff run – with some impressive talent.

190 Lakeland is yet another power that is still trying to hold on under legendary head coach Bill Castle, but the teams around them have also improved and it is no longer a given that the Dreadnaughts will end up in the state title game.

197 Jacksonville Bolles has ended up in the 4A finals the past two years, dropping both games, but this is a new year and this a team that has talent to pull some major surprises.

198 Bradenton Manatee – despite winning nine games a year ago – is in a rebuilding mode under first year head coach Jacquez Green. The Hurricanes have talent.