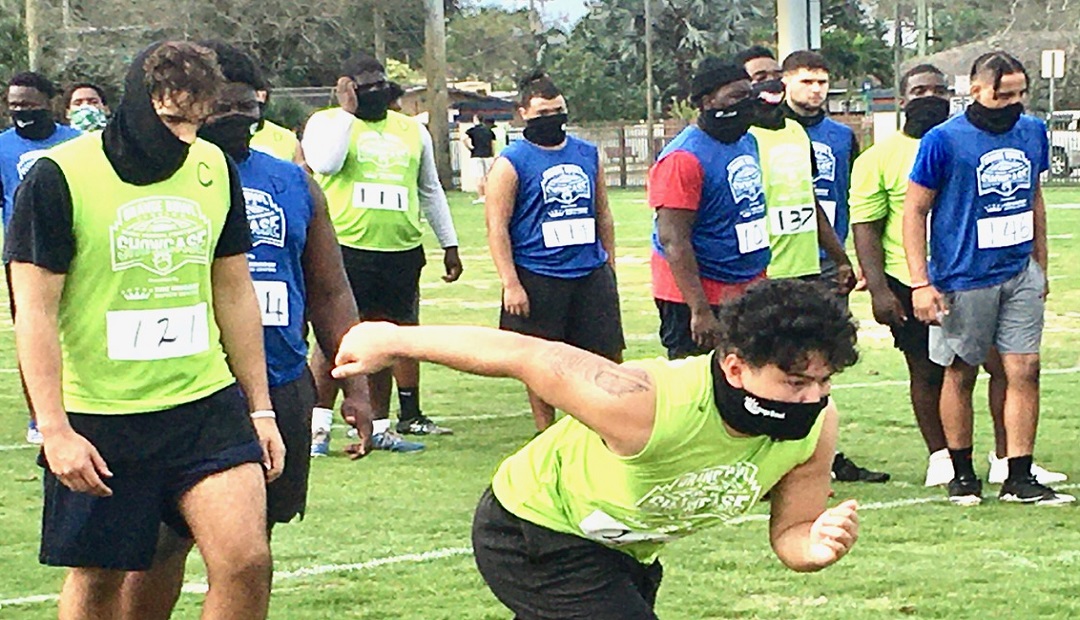 In a year where just getting out on the football field was a chore – and certainly took time to achieve – high school football coaches have been working overtime.

Taking every precaution possible to guard against this pandemic, the season amazingly finished up with many teams getting games in to help in the recruiting process. But as much as coaches, parents and athletes tried, this was a tough year to grab the attention of college coaches are limited where they can go – and what they can do.

Because of the smaller schools not having to play by those rules, this past Saturday became vital for high school seniors with grade and no place to go.

As the 5th Annual Orange Bowl Senior Showcase Presented by Tire Kingdom was taking place at St. Thomas University in Miami Gardens, small colleges made their way down to watch nearly 300 athletes do their thing.

This free, one-day event was once again conducted in association with the National Football Foundation (NFF) and its local chapters (there are five other similar events in various markets nationwide), and will bring together academically qualified high school seniors from Florida and football coaches from NCAA Division II, III and NAIA programs across the country, which provides an unprecedented opportunity for young student-athletes to use their athletic and academic skills to earn collegiate scholarships, and ultimately a college degree.

In the event’s first four years, more than $4 million in scholarships and financial aid was awarded to high school student-athletes to study and play football at the collegiate level. Nearly 300 student-athletes have been recruited by colleges and universities since the inception of the event.

“This event has truly been a marquee tool in the recruiting process,” said Orange Bowl Committee President & Chair Jack Seiler. “Holding the event this year was especially important because many high school football players have not had the same amount of exposure as they normally would have.”

With players on hand for this showcase, head football coaches from all over south Florida came to support their players, who went through drills and testing and had the opportunity to talk with the college coaches who made their way down from up north.

Two-time defending 2A state champion Champagnat Catholic had prospects on hand for this event. Head Coach Hector Clavijo was their biggest supporters on Saturday. He knows that the only way his program is to remain successful, is to support and follow the process until the end.

“I have always believed that the time when your players need you the most is when they are done playing,” Clavijo said. “That’s why it’s important for me to be here.”

To be eligible to participate in this Showcase, student-athletes had to be graduating high school this year and have not accepted a scholarship offer from a NCAA Division I (Football Bowl Subdivision and Football Championship Subdivision) program.

In addition, like the past four years, they needed to earn a 2.5 GPA or higher in 16 Core Courses.

The student/athletes also had to earn an SAT score of 920 (math and verbal only) or higher; OR

Have a composite ACT Score of 18 or higher or a sum score of 68 or higher.

With a number of college coaches watching, there were plenty of Miami-Dade and Broward football players.

For nearly five hours, the athletes had the opportunity to test their football skills as well as speak with college coaches who came from as far away as Wisconsin, Missouri, Michigan, Iowa and Pennsylvania – and as close as St. Thomas University, Florida Memorial University, Keiser University and ASA Academy to get a look a gifted talent that just needed to turn a head or two on this day.

“We were honored to host this last year – and it was great,” St. Thomas University head coach Billy Rychel explained. “Our coaches really looked forward to being part of this. A huge honor to be part of the famed Orange Bowl event.”

With no surprise to anyone who attended, Miami-Dade and Broward County athletes certainly made a difference.

Defcon Dials Up Some Impressive 7-on-7 Talent