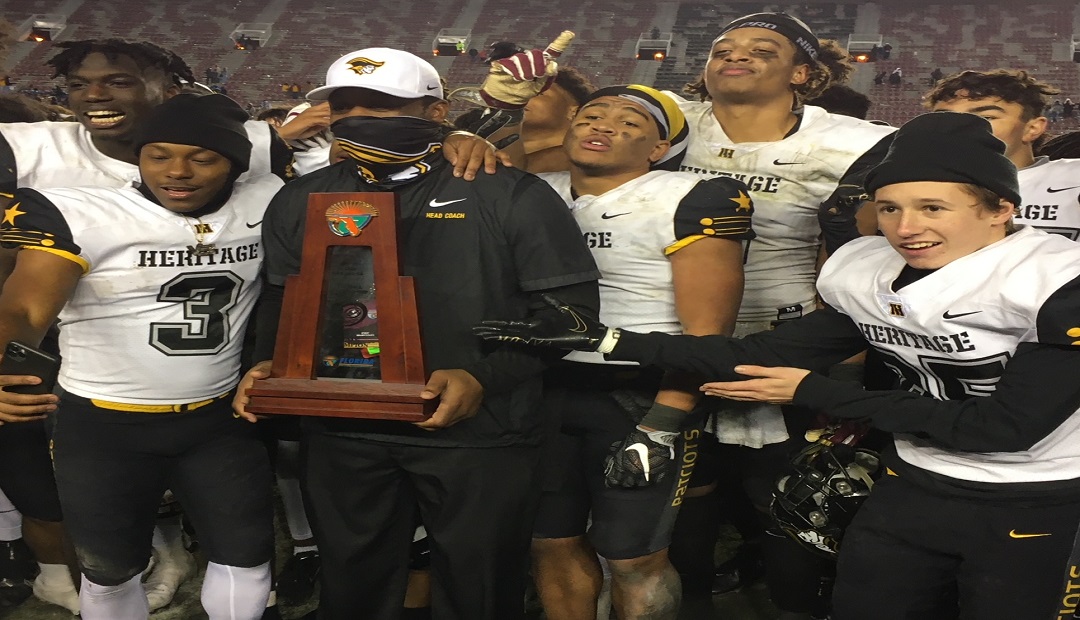 There was a time when kickoff classics or jamborees meant nothing more than a tune-up for the season ahead. Not anymore!

In the age of national rankings, games involving top teams mean everything – where it happens to be tonight – when Plantation American Heritage plays host to the nation’s top program, IMG Academy, at 7:30 in an “exhibition” game.

While everyone realizes the game may not count in the won/loss column, it will speak volumes in the hunt for a national title – which so many teams are playing for these days.

Coach Pepper Johnson’s IMG squad and head coach Pat Surtain’s Patriots will play this one like everything is on the line – and even though it may not count as far the season record is concerned, those who vote for the nationally-rated teams may not factor in the loser of this game for the national title at the end of the year. Too many impressive teams to compete against.

The defending 5A state champion Patriots have added some more pieces to an already talented team that has more than its share of elite talent.

The Ascenders are loaded at every position – having as many as 40 Power 5 prospects, who come from every corner of the nation. But still have to travel to south Florida this evening for a game against a very talented program.

Now, while their 5A regional counterparts are knocking heads with IMG Academy, the defending 6A state champion (moved down to 5A this year) Central Rockets will be kicking it off at 10:30 eastern time in Los Angeles against top-rated John Bosco in a game that pits head coach Roland Smith’s talent-filled team against one of the best in the country – in a game that does count. But if we’ve learned anything about the Rockets over the years, they are NOT intimidated against anyone - as several national powers have found out the past decade.

Two outstanding games that will definitely shine the spotlight on south Florida – and that’s what is so exciting.

While Miami Central and John Bosco – and IMG and American Heritage will have much of the spotlight, there are other teams to keep an eye on as well:

Chaminade at Fort Lauderdale Dillard, 7: This is a really interesting game against teacher (Dameon Jones) and student (Tyler Tate). Tate was part of the three straight 3A state championships for the Lions as Offensive Coordinator. Now, he has a Panther team that went 6-0 last year, his first, and stretched the two-year record to 18-1. Chaminade-Madonna can do something this year that very few – if any will ever accomplish – six straight trips to the state title game.

Miami Edison at Miramar, 7: These two schools played two years ago – in head coach Luther Campbell’s debut with the Red Raiders – and you can expect another hard-fought battle when Coach A.J. Scott’s Patriots attempt to get this program back on track. Edison fell short in the 3A playoffs a year ago.

Miami Palmetto at Fort Lauderdale Cardinal Gibbons. This is a matchup of two programs that are expecting big things in 2021. Head Coach Matt Dubuc and his Chiefs are on course to bring home another 4A title – with head coach Mike Manasco has the athletes to compete in a very talented region.

Venice at Northwestern (Traz Powell Stadium), 7: No other way to put this other than the Venice Indians do not play around. They don’t have eight state titles or send a ton of kids to the NFL, but head coach John Peacock’s teams will battle you until the end. Head Coach Max Edwards and his Bulls have moved up to 6A, and are still talented. But how talented are they? We will find out this evening.

In addition to those classic matchups, Friday night will also feature some other games to keep an eye on: