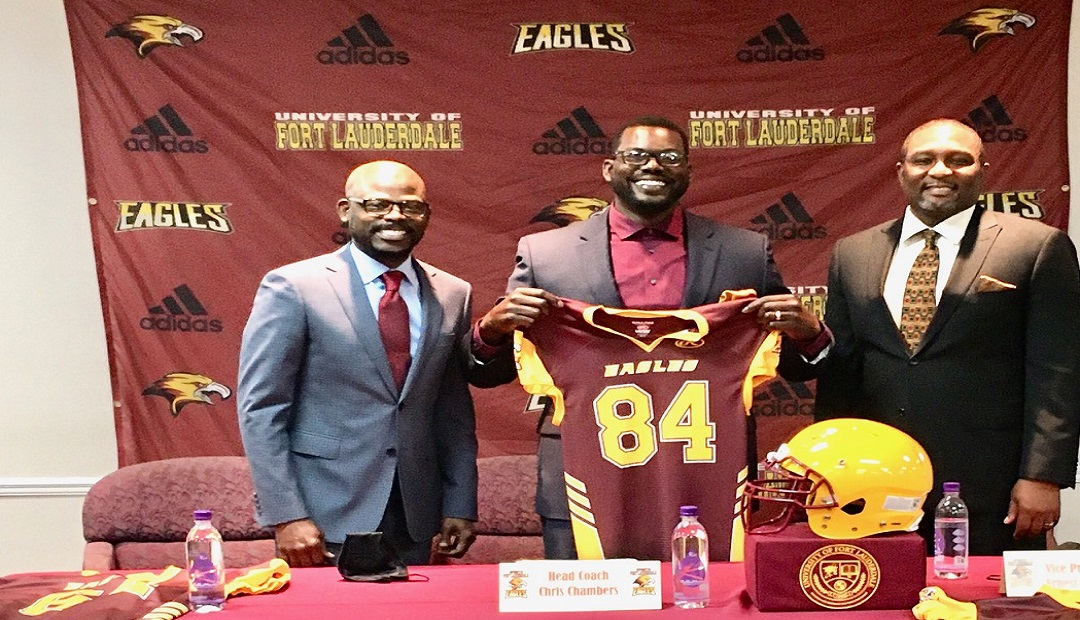 As former Miami Dolphin, Kansas City Chief and San Diego Charger receiver Chris Chambers stepped up to the microphone on Tuesday afternoon, it was indeed all about vision.

Introduced as the newest head football coach of Fort Lauderdale University, it wasn’t about a player who was taken 52nd overall in the 2001 National Football League Draft by the Miami Dolphins. The day was not about his six seasons with the Dolphins, where he would record 5,688 yards on 405 catches, with 43 touchdowns. It wasn’t even about being named the team Rookie of the Year and the Dolphins Man of the Year.

What this day was all about, in a growing facility to the west of 441 on Sunrise Boulevard in Lauderhill, was indeed a vision. An ongoing chapter in college football in south Florida, and the passion and experience to grow this school and athletic program is certainly an objective that gives one of the state’s largest cities another emerging landmark – one that continues to make a name on and off the playing fields..

What separated Chambers from anyone else they ever thought about for the job was something that VP of Athletics & Student Services Ernest T. Jones could not ignore.

“Chris Chambers brings a teaching, coaching and regimented way of approaching student/athletes,” said Jones, who had played this game at its highest level. “Where many kids would never remember him playing, they do know him from his many camps, combines and instruction – as well as giving his time to this community.”

THE TALENT IS THERE TO CHOOSE FROM

Make no mistake that when it comes to producing football talent, there are very few – if any states that can match the sheer volume that the Sunshine State, south Florida in particular, continues to do – as student/athletes are at every college in Florida – as well as in just about every state that plays the sport.

With Miami, FIU, FAU, Florida Memorial University, St. Thomas University, Ave Maria and Keiser University within 75 miles across south Florida, the options in this region have once again grown – and yes – that is a good thing.

As the University of Fort Lauderdale “Eagles” continue to get things together – between its two campuses (former Sunrise Musical Theater) and growing population of students and athletes, they will compete in 14 intercollegiate sports with plans to expand to 22 sports in the coming years. Chambers is the school’s first hire since joining the National Christian College Athletic Association (NCCAA).

“Because we have long been involved with the high school athletes in all of south Florida – via camps, combines and 7-on-7 events, we know that the talent is out there and just looking to stay home, play football and get an education,” Chambers explained. “The athletes know we have coached for a number of years down here and end up with positive results.”

Week 9: The Cream Rising To The Top