DISTRICT CHAMPIONSHIP: No. 2 St. Thomas Aquinas and No. 5 Dillard Tonight 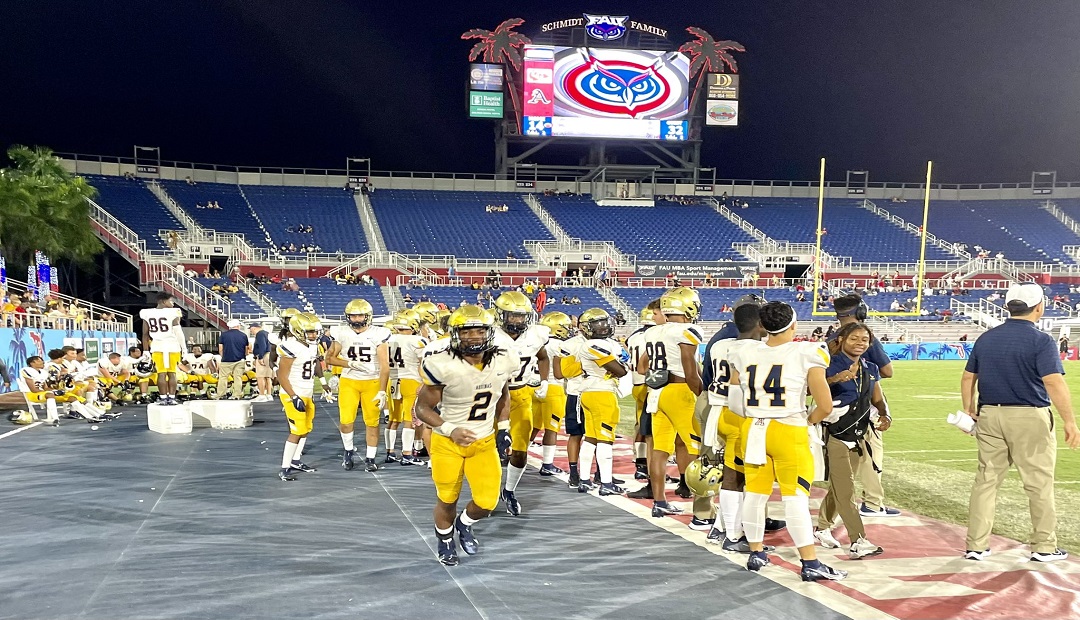 When the football classifications were made for this year by the Florida High School Athletic Association (FHSAA), all eyes were on a district where two Broward powers would have a chance to clash for the first time in many years.

With national powerhouse St. Thomas Aquinas winning the past two 7A state titles, and have a stronghold on the class, along comes Fort Lauderdale’s Dillard High.

The Panthers and Raiders have had a past, but it’s been a long, long time since a meeting will mean as much as tonight’s (7:00) district showdown at St. Thomas Aquinas.

What head coach Tyler Tate and his 7-0 team bring into the game is a team that is very much headed in the right direction. This program went 12-1 in 2019, 6-0 in a Covid shortened 2020 and are unbeaten this season – winning 25 of the past 26 games played. They are stacked with sought after talent, especially on defense where this unit has not given up a point in 19 quarters, outscoring the opposition, 320-7.

The reality that the team they are playing has been there and done that. Coming off a convincing 39-14 win over defending 4A state champion Cardinal Gibbons, head coach Roger Harriott and his Raiders are indeed peaking at the right time as they look for a strong finish and another state crown. They are indeed using plenty of players who are all stepping up when given the opportunity.

The road to that return to the state championship game begins this evening against a Panthers’ team that will come against the biggest test of the season.

While Dillard and St. Thomas Aquinas will get much of the spotlight this evening, there are other games that will also get some attention as well:

Booker T. Washington at No. 6 Homestead. The Broncos have already wrapped up their district title and are sitting well when the 7A playoffs begin.

Other than a contest in the GMAC Football Week, this is a game where they will play hard and need some of those playmakers in this game.

For head coach Gerald Cox and his Tornadoes, this game becomes a must win for them to get back in the 4A mix. The sad thing is this program has played one of the most competitive schedules around and may get penalized for it. Great game to see with plenty of talent.

No. 10 Miami Palmetto (6-1) at No. 12 Gulliver Prep (5-1), 3:30. Originally slated to play this game six weeks ago, but because of flooding and bad weather, it’s going down today and promises to be a huge contest and bragging rights.

Remember, Palmetto is scheduled to play Christopher Columbus again during GMAC Football Week, so this is a huge game for head coach Mike Manasco and the Panthers.

Coach Earl Sims and his Raiders, after losing for the first time in nearly three years during the regular season, can finish as the No. 1 4A seed in the region.

In addition to those three games, here is a look at some of the other matchups that fans will watching as well:

Stranahan at No. 3 Chaminade-Madonna, 7

For the past 51 years, we have spent plenty of time on football fields than anyone in the country. From games to practices, camps, combines and 7-on-7 events, we get to as many events as possible to see the athletes LIVE. Follow us on Facebook (Larry Blustein) Instagram @OurBoyBlu) and Twitter (@larryblustein). Contact us at: This email address is being protected from spambots. You need JavaScript enabled to view it..

Week 9: The Cream Rising To The Top