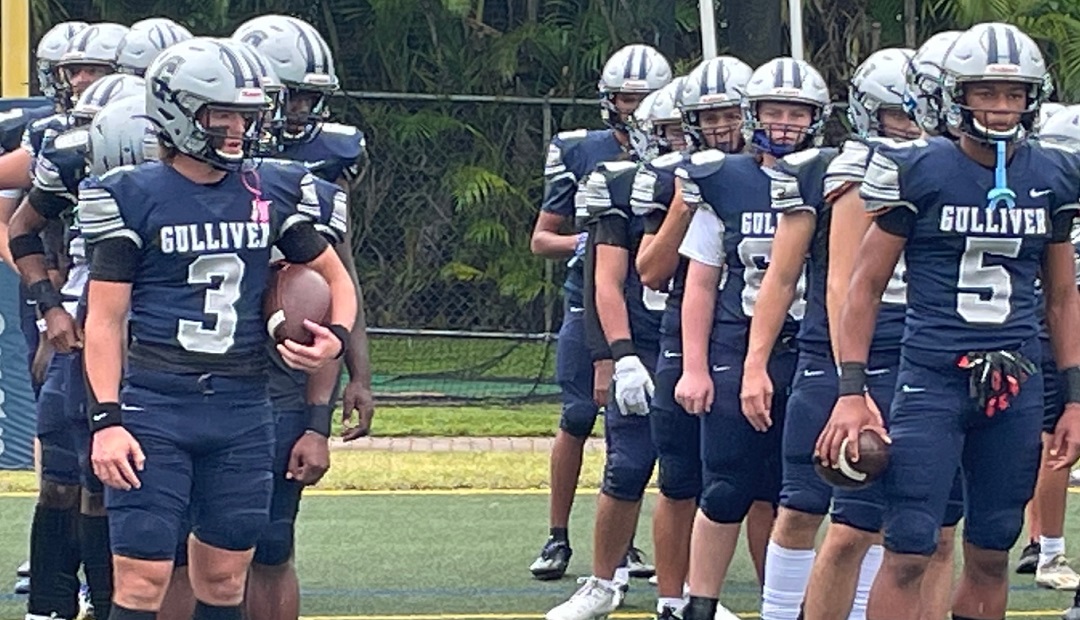 It will happen every week. Top teams against top teams and one will unfortunately have to lose.

Welcome to 2021, where nobody is running from anyone if they want to be considered the best – and for football fans in south Florida – it is something to look forward to.

As we head toward the fourth week of the season, you can see the top programs starting to move toward the top, and while that is great for this week, there are so many matchups, involving the top 10, that will certainly continue to change the landscape.

Huge wins by St. Thomas Aquinas, Killian and Chaminade-Madonna have helped to elevate those programs back toward the top.

With a trip to unbeaten Gainesville Buchholz this Friday, Fort Lauderdale Cardinal Gibbons holds down the No. 1 spot in Miami-Dade and Broward Counties, but powers Miami Central and St. Thomas are waiting for the defending 4A state champs to falter

Here is the way Week 4 stacks up:

1.Fort Lauderdale Cardinal Gibbons Chiefs (4A, 2-0). Stranahan put up a fight, but didn’t have enough depth in a 37-8 setback to the defending 4A state champions. THIS WEEK: A road trip to play unbeaten Gainesville Buchholz this Friday, Sept. 17. NEXT OPPONENT: A home game against Fort Lauderdale Calvary Christian on Sept. 24.

2. Miami Central Rockets (5A, 1-2). After two tough losses to nationally rated programs, head coach Roland Smith and his team rolled over Miami Booker T. Washington, 51-7 THIS WEEK: A Thursday game at Miami Springs.  NEXT OPPONENT: A district game at home against No. 17 North Miami Beach on Thursday, Sept. 23.

3. Fort Lauderdale St. Thomas Aquinas Raiders (7A, 2-1). Getting back on the winning track, another impressive game – against No. 7 Plantation America Heritage was a four-quarter game, 24-16. THIS WEEK: The Raiders play at home on Sept. 17 against Miami Monsignor Pace. OPPONENT: Another huge home game on Sept. 24 against No. 6 Western.

4. Hollywood Chaminade-Madonna Lions (3A, 2-1). After a tough two-point setback the week before at Plantation American Heritage, head coach Dameon Jones and his team rebounded with a big win against No. 18 Miami Christopher Columbus, 33-16. THIS WEEK: It gets no easier on Sept. 17 with a trip to Georgia powerhouse Buford. NEXT OPPONENT: A home game on Sept. 24 against No. 12 Hialeah Champagnat Catholic.

5. Miami Gulliver Prep Raiders (4A, 2-0). A thrilling 39-38 win against Miami Gardens TRU Prep Academy. THIS WEEK: An away game on Sept. 17 at North Palm Beach Benjamin. NEXT OPPONENT: An away game against 2A power Dade Christian on Sept. 24.

6. Plantation American Heritage Patriots (5A, 1-2). Playing one of the most challenging schedules in south Florida, head coach Pat Surtain and his team dropped a tough 24-16 decision to No. 3 St. Thomas Aquinas. THIS WEEK: A scheduled trip to New Orleans Edna Karr on Friday, Sept. 17 has been called off. NEXT OPPONENT: A huge matchup on the road against No. 1 Cardinal Gibbons on Oct. 1.

7. Miami Killian Cougars (5A, 3-0). After losing to Gulliver Prep in the kickoff classic, head coach Derrick Gibson and his team got No. 13 Miami Palmetto, 35-21. THIS WEEK: A Sept. 17 game on the road against Miami Jackson. NEXT OPPONENT: An away game at Miami Carol City on Thursday, Sept. 23.

8. Fort Lauderdale Dillard Panthers (7A, 3-0). Coach Tyler Tate’s team won for the 21st time in the past 22 games with a 15-7 win against Miramar. THIS WEEK: A district home game on Sept. 17 against Cooper City. NEXT OPPONENT: A Saturday (Sept. 25) game against South Plantation.

9. Davie Western Wildcats (8A, 1-1). Coach Adam Ratkevich and his team came up with a solid 24-14 win against Fort Lauderdale. THIS WEEK: A home game against much improved Coral Glades on Sept. 17. NEXT OPPONENT: A trip to No. 3 St. Thomas Aquinas on Sept. 24.

10. Deerfield Beach Bucks (8A, 2-1). Rebounding from a tough loss to No. 8 Dillard, the scores came often in a 70-0 win against Pompano Beach Blanche Ely.  THIS WEEK: A very competitive district matchup on Sept. 17 at unbeaten and No. 20 Parkland Douglas. NEXT OPPONENT: A road game at state-rated Rockledge on Sept. 24.

12. Hialeah Champagnat Catholic (2A, 2-1). The two-time defending 2A state champs outscored 4A Miami Monsignor Pace, 33-21. THIS WEEK: At press time, the Lions were looking for an opponent. NEXT OPPONENT: A Sept. 24 game at 3A powerhouse and No. 4 Chaminade-Madonna.

14. Plantation Colonels (6A, 1-0). For the second straight week, head coach Steve Davis and his team were off. THIS WEEK: A Sept. 17 contest against Coconut Creek. NEXT OPPONENT: A home game against Everglades on Sept. 24.

15. Homestead Broncos (7A, 2-1). This team is on a roll – and with a convincing 41-6 win against Miami Jackson – things look outstanding for this program. THIS WEEK: The Broncos will take this week off. NEXT OPPONENT: The Broncos will host Mater Academy on Sept. 24.

17. North Miami Beach Chargers (5A, 1-1). With a huge stretch run coming up, head coach Jeff Bertani and his team took the week off. THIS WEEK: Hialeah-Miami Lakes will play host on Sept. 17. NEXT OPPONENT: No. 2 Miami Central will play host on a Thursday, Sept. 23.

18. Miami Christopher Columbus Explorers (8A, 1-2). Losing to No. 4 Hollywood Chaminade-Madonna was another wakeup call for this program. THIS WEEK: A trip to Homestead for a Sept. 17 game against South Dade. NEXT OPPONENT: Things do not get any easier as No. 13 Miami Palmetto comes in for a key 8A game on Sept. 24.

19. Doral Academy Firebirds (7A, 3-0). A 30-0 contest against Miami High kept this team in the spotlight. THIS WEEK: An away game on Thursday, Sept. 16 against Hialeah Gardens Mater Academy. NEXT OPPONENT: A Sept. 24 home game against Miami Southridge.

20. Parkland Douglas Eagles (8A, 2-0). Just in time for a key district game, head coach Quinton Short and his team enters the Top 20. THIS WEEK: A huge district matchup on Friday at home against No. 10 Deerfield Beach. NEXT OPPONENT: An Oct. 1 game on the road at Boca Raton.

0 #1 Delawrence Charles B 2021-09-14 15:34
Your rankings are truly unique. Miami Edison Red Raiders should be #12 and Miami Central Rockets should be ranked #1. Strength of scheduling matters you continue to reward teams that play nobody with undeserved high rankings.
Quote
Refresh comments list

SPRING FOCUS – Expect Christopher Columbus To Be In The Mix Again

Safety Is Paramount For This Saturday’s Linemen Showcase