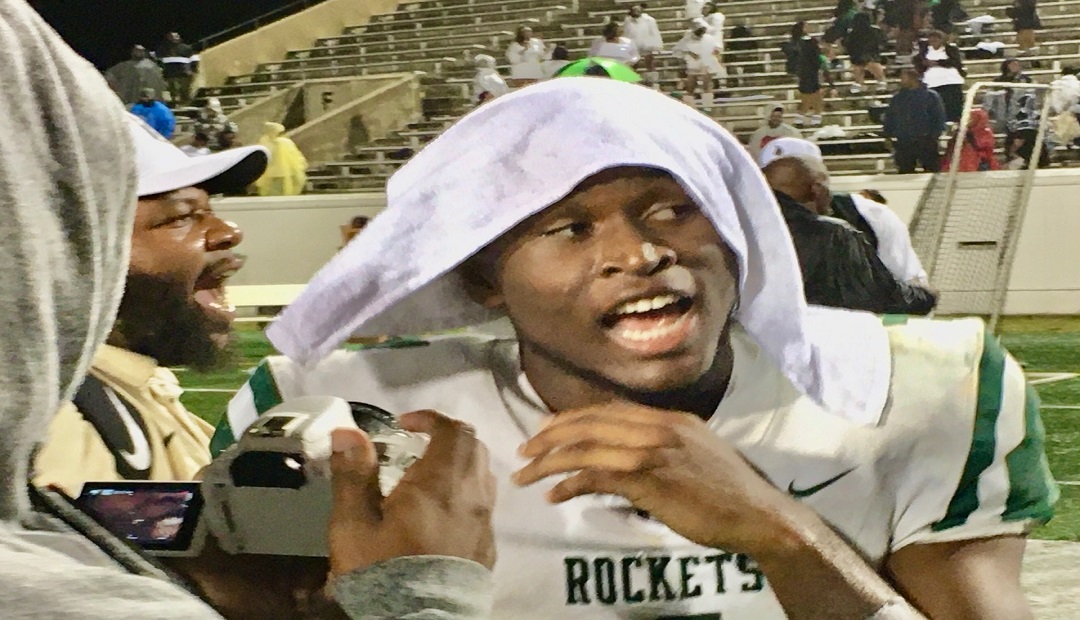 Roland Smith had a belief that no matter when the season began, his Miami Central Rockets would be right in the middle of the race for state. He was right.

What the defending 6A state champions have built is a program. One that has lasted over a decade – and the expectations and results have followed.

When this season was totally messed up by the high Covid number throughout Florida, it was south Florida that was left with a decision. One that only five public school programs answered.

Now, three-time defending 3A state champion Chaminade-Madonna, defending 2A state champ Hialeah Champagnat Catholic, Cardinal Gibbons (4A), Plantation American Heritage (5A), the Rockets (6A) and St. Thomas Aquinas (7A) remain to carry the flag for the region.

While this season had plenty of promise from the beginning – even a 21-14 loss to Miami Northwestern wasn’t about to rattle the Rockets. But things surely got strange.

After that October 23rd opener, the Rockets played a half with Miami Edison, winning 14-0 the following week. The “play-in” game for the state championships against Immokalee on November 6th was canceled. So was the following “playoff” game with Archbishop McCarthy on November 13th.

On Saturday, November 21st – nearly a month after they played a half against the Red Raiders, Central beat Naples Lely, 42-16. They came back the following week after being down by two scores to beat Naples, 31-21, shutout Fort Myers Dunbar, 40-0, and this past week ran past Palmetto (Bradenton), 47-20.

In addition to Miami Central, Tallahassee will be well represented by south Florida programs:

Jacksonville University Christian (8-4) vs. Hialeah Champagnat Catholic (10-2). Head Coach Hector Clavijo and the defending state champion Lions have been playing at a high level since the start of the season.

The Christians won this game two years ago – and are loaded with talent as well. Should be a very entertaining game as both teams are tested.

Jacksonville Trinity Christian (11-1) vs. Hollywood Chaminade-Madonna (8-1). The last time the Lions lost in the state finals was to this impressive program from Jacksonville.

While head coach Dameon Jones and his team is young, they are gifted with a number of this group of players already winning state titles.

While the Bulldogs lost in this game last year to Miami Booker T. Washington, head coach Matt Dubuc and the Chiefs missed out on the state title game in 2019 – after winning it all, at 5A, in 2018.

The Chiefs are playing as well as anyone in the state right now.

Tallahassee Rickards (10-1) vs. Plantation American Heritage (10-2). The return of head coach Pat Surtain and the Patriots to the state title game came with some drama in the state semifinals, but defense has carried this program all season – and don’t look for that to stop against the “home” team Rickards Raiders.

The Patriots are starting to pick up some steam on offense as well.

Orlando Edgewater (8-2) vs. Fort Lauderdale St. Thomas Aquinas (7-1). Rematch from last year’s title game has head coach Roger Harriott and the Raiders in a familiar position – trying to finish off a crazy season.

The Raiders have more than taken care of business in the playoffs – with a solid defensive effort and timely offense.

The Eagles went all the way to Niceville and pulled off an amazing win on a field goal that bounced the right way.

STATE CHAMPIONS! WHAT A SEASON FOR TRU PREP

What looked like no season for University School’s football program back in August certainly ended on a positive note on Saturday in Lakeland.

Playing as the TRU Prep Saints all season, head coach Mario Smith guided this program through some crazy, but yet amazing times.

The season came to an end at Bryant Field in Lakeland as the Saints (7-2) claimed the SSIA (Sunshine State Independent Association) Football State Championship with a 22-12 win over American Collegiate Academy.

It’s All About Technique For 5 Star STUD Linemen