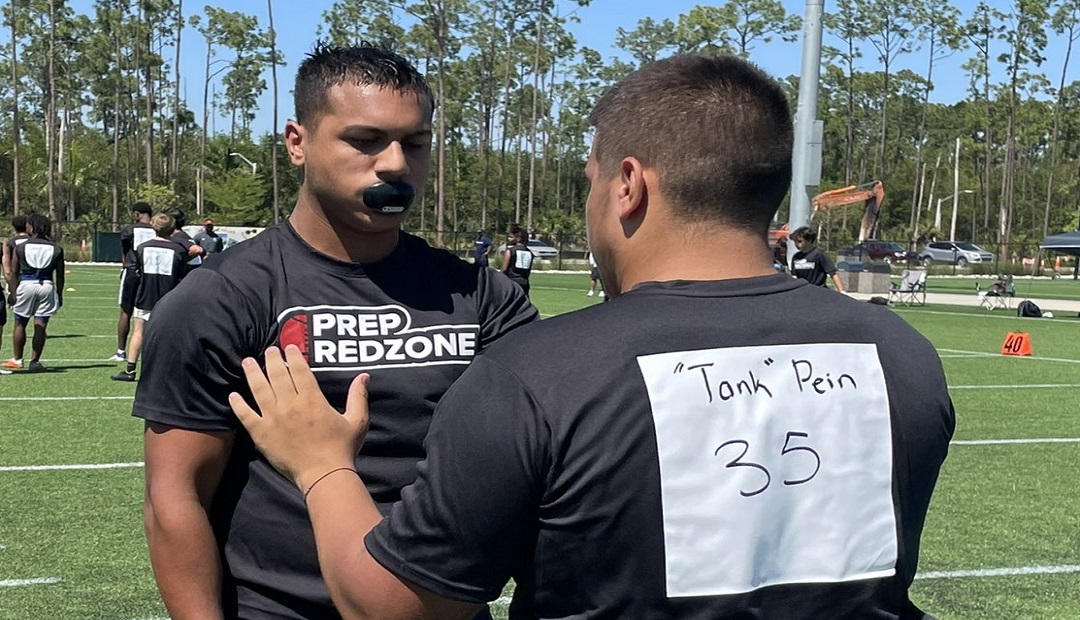 When it comes to competing, Miami-Dade and Broward Counties have never been shy about getting to every event and matching their skill level.

Last Sunday at the Paradise Sports Complex in Naples, several Miami-Dade and Broward athletes were part of the Prep Redzone Showcase.

With athletes coming from all over the state, and college coaches from Ave Maria University, St. Thomas University and Keiser – along with high school coaches – heads were turned and stars were born.

With rising seniors (2023), juniors (2024) and sophomores (2025) taking the field, all eyes were on athletes who continue to compete year-round against the best.

“These athletes out here are really gifted,” said Keiser University linebacker coach Nick Vagnone. “Speed, strength, agility and plenty of size seem to be a trademark of Florida athletes. We have the pleasure of recruiting these young men throughout the year, so we know what kind of talent level there is.”

Among the Class of 2023 prospects on hand were linebackers Justin Coles (St. Thomas Aquinas) and Jaizaih Lugo (Miami Northwestern), who both were impressive in drills and 1-on-1s.

The Class of 2024 also rolled out some gifted prospects, who not only tested well, but when the competition came on, Torra “TJ” Kelly (DB, Deerfield Beach) and David “Tank” Pein (DL, St. Thomas Aquinas) opened some eyes. So did Doral Academy quarterback Fabian Rodriguez, who displayed a big, accurate arm.

With two of the best rising sophomores in the nation on hand, the event gained instant credibility.

Both prospects were huge last season as freshmen – with Marcelin helping to lead the Central Rockets to a third consecutive state title.

For the past 52 For the past 52 years, we have spent plenty of time on football fields than anyone in the country. From games to practices, camps, combines and 7-on-7 events, we get to as many events as possible to see the athletes LIVE. Follow us on Facebook (Larry Blustein) Instagram (@OurBoyBlu) and Twitter (@larryblustein). Contact us at: This email address is being protected from spambots. You need JavaScript enabled to view it..