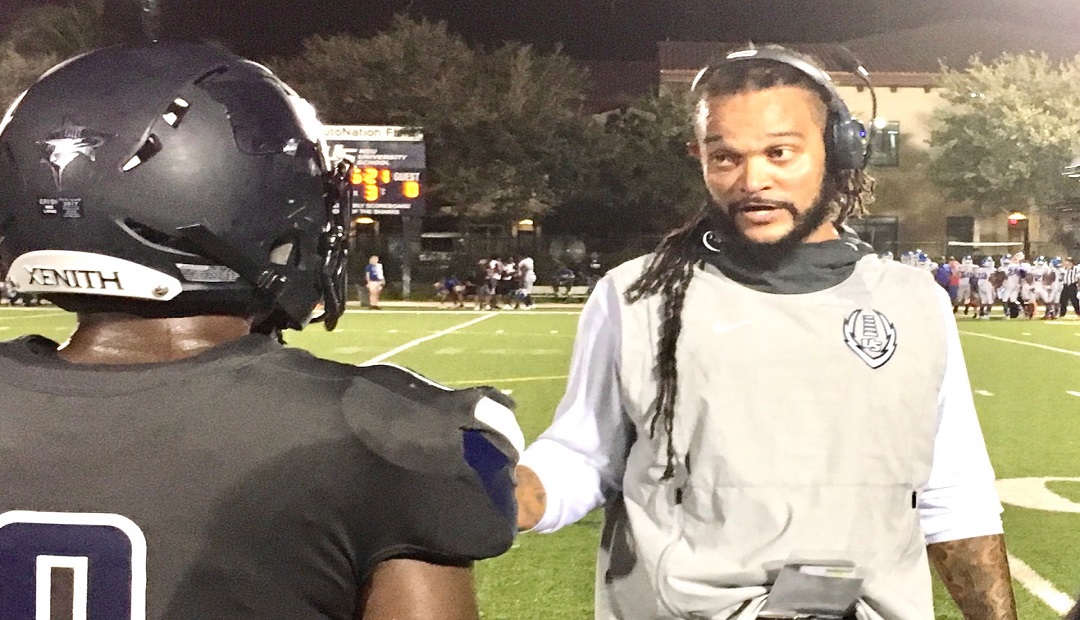 While many high school football programs sit and wait for something positive to happen, the game is being played and student athletes are missing out on a valuable opportunity for exposure.

This past weekend, several areas across the state of Florida opened the 2020 high school football season – and this coming weekend – many more, including local defending state champions Hollywood Chaminade-Madonna (3A) and Hialeah Champagnat Catholic.

As public schools in Miami-Dade, Broward and Palm Beach eagerly anticipate an opening date, which has not been finalized, some area schools have sprung into action and have made plans to look out for their own student/athletes.

Private programs such as defending 7A state champion St. Thomas Aquinas and 4A power Cardinal Gibbons will begin on Tuesday, joining several others who have been on the field for a week or two.

As private schools across south Florida have searched their options to open the season safely, NSU University School in Davie was met with the news that there would be no fall contact sports – including football.

The Sharks, under the direction of head coach Daniel Luque, were one of the favorites to represent 4A in the south – with elite athletes that have been recognized by colleges and universities across the country.

With no spring or summer because of the Coronavirus, the last time many of these athletes were watched – in any form – was last November after the season came to an end with a playoff loss to Cardinal Gibbons.

The need to get back on that field and play a season was without question the most important thing in many of these young men’s lives. Remember, being at NSU University School, they have achieved in the classroom and prepared themselves for a bright future – after football in college.

As the frustration began to set it, many who realized that playing this season was so important, the wheels began to move – and many started to step up.

St. Thomas University was instrumental in opening the doors for the 2020 season – and without University School offering a football program this season – and alternative plan was set up.

One time Miami Monsignor Pace head coach Mario Smith, who had always been about the student/athlete, and started the highly successful TRU Prep Academy, offered to step up to let this University School football program play this year as an independent – under the TRU Prep Academy Saints – while still attending and receiving the quality education that NSU University School has long provided.

Remember, this was the same TRU Prep Foundation that came to the rescue for many seniors last January when the annual Miami-Dade vs. Broward All-Star Game was cancelled.

Smith and TRUPrep Academy’s mission has always been to stimulate, educate and motivate the minds of young men. TRU PREP focuses on academics, athletics, mental, physical, and spiritual growth.

With donations made to help pay for equipment and other essentials, Smith overseeing the administrative duties of the football program and St. Thomas University President David Armstrong, a former football coach at the collegiate level and Bobcats’ Head Coach Bill Rychel offering to let the team practice at his school, 40 student/athletes and coaches will have the chance to play football in 2020. So many others have reached out to ask what we can do?

Because of this pandemic and the dangers that have come out of it throughout the country, NSU’s decision was based on what it’s Executive leadership came up with – and a decision that prompted those student/athletes, parents and coaches to make this decision.

The Sharks become Saints for 2020!