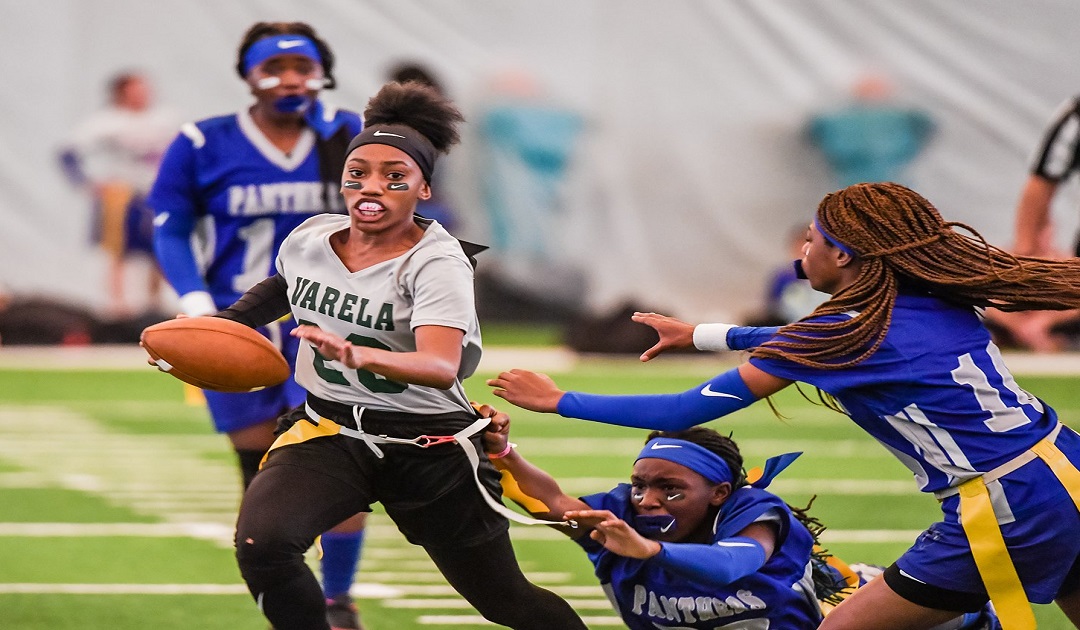 With support from NFL Flag and RCX, the NAIA will work to develop league infrastructure and operations for the first women's flag football competition governed by a collegiate athletics association.

In union with the addition of varsity Women’s Flag Football by the NAIA, St. Thomas University (STU) has also announced its’ intentions to add the sport to the athletic roster, with sights on competing in spring 2021.

Since arriving at St. Thomas University, President David A. Armstrong, J.D., has worked to ensure that STU becomes a destination university in South Florida, and the addition of Women's Flag Football keeps St. Thomas ahead of the curve. "At St. Thomas University, we strive to be at the forefront of providing opportunities for our students. Once again, we are taking a leading role in creating athletic, educational opportunities for women by starting a varsity flag football team," said President Armstrong. "Flag football is one of the fastest-growing sports in the state of Florida for women, and we want to make sure that we are leading in providing these new forms of collegiate competition. We look forward to the new partnerships and prospects this endeavor will bring."

Dr. Jen Welter became the first woman to coach in the NFL when she was a part of the Arizona Cardinals in 2015 and hosted the "She's in the Game, sports, and eSports clinic" at St. Thomas in February. A true pioneer of the game, Dr. Welter continues to anticipate growth in Women's flag football, saying, "When I hosted the 'She's in the game,' camp at STU on the Saturday before Super Bowl LIV, we were welcomed with open arms. The STU Athletic Department welcomed us to their field and the football players joined as coaches. The day, like the program, is infused with enthusiasm, excitement and a desire to be leaders in supporting the movement to get girls in the game."

Dr. Welter added, "Our motivation is to teach girls that they had a place in every game, and on every field. We spoke how one day, football would offer them opportunities to play a collegiate sport, but none of us realized that day came in just a few months. For years, football has been known as the final frontier for women in sports. Today, with the addition of varsity women's Flag Football to STU and the NAIA, we are taking strides towards not only equality in sports but to gender equality, as well."

St. Thomas University will become a flagship university for Women's Flag Football, following the announcement by the NAIA. Following in the footsteps of St. Thomas, are Sun Conference members Florida Memorial, Keiser, Warner, and Webber International.

The addition of Women's Flag Football to the NAIA and St. Thomas University will take place in 2021. STU Athletics, in preparation for the announcement of Women's Flag Football, has named STU Football Assistant Coach, Erick Burzanko, as the inaugural head coach for the program. "I'm extremely grateful and for the opportunity to build another successful program here at St. Thomas University," said Burzanko. "It is an exciting time to be a Bobcat; we have a tremendous support system on campus and in the community that will help this program succeed."

The NAIA will begin working with NFL FLAG and RCX immediately to outline competition guidelines and next steps for schools and conferences that will play women's flag. The first competition season will be held in the spring of 2021.

The NAIA will host an emerging sport or invitational championship in the spring of 2022. An emerging sport in the NAIA is defined as at least 15 participating institutions, while invitational can be defined as at least 25. A sport must have a minimum of 40 participating institutions to be considered for full championship status.

In addition to the women's Flag Football initiative, the NFL will serve as the presenting sponsor of the 2020 NAIA National Football Championship, scheduled for Saturday, December 19, at Eddie G. Robinson Stadium at Grambling University in Grambling, La.

St. Thomas is a Catholic University with rich cultural and international diversity committed to the academic and professional success of its students who become ethical leaders in our global community. The only Catholic Archdiocesan-sponsored University in Florida, STU is a private, non-profit university that offers more than 45 undergraduate, graduate, and post-graduate degrees at its 144-acre campus in Miami Gardens, Fla., and through distance learning, including one of the oldest (and highly ranked) undergraduate programs in Sports Administration in the country. STU has been ranked #1 by U.S. News World and Report in social mobility for regional universities in the South, which means it takes students from the lowest financial strata and catapults them to a much higher financial strata in only 10 years. In the last year, STU also recruited the largest incoming undergraduate class and raised the most money in the university’s history.