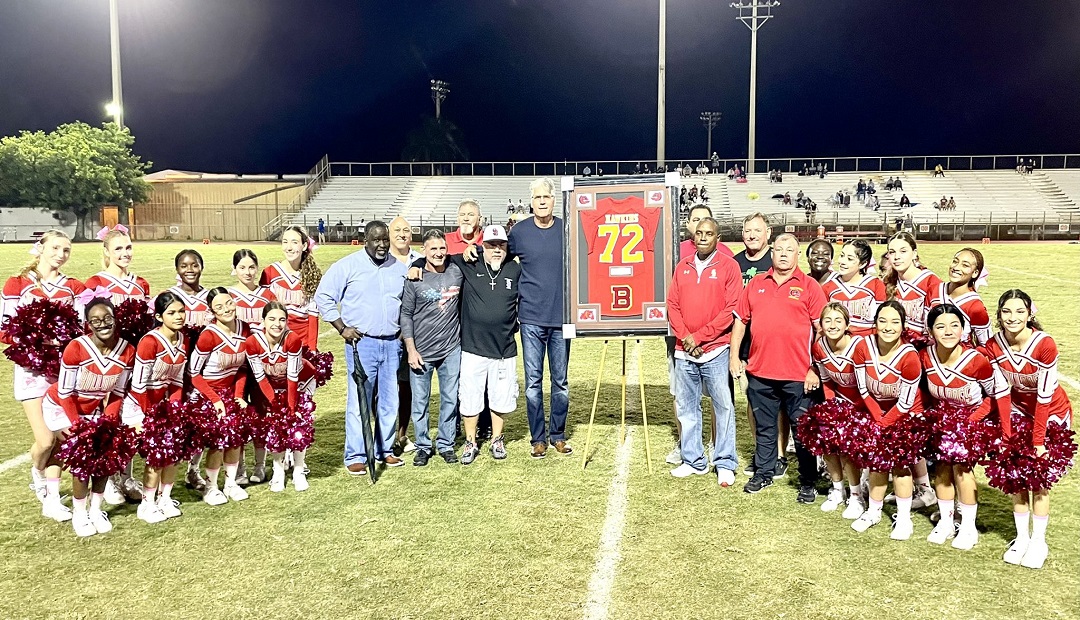 HOLLYWOOD – As South Broward and Parkland Douglas went through their pre-game warmups; a misty rain began to fall on a Thursday evening.

As the teams prepared for a non-district matchup, a tall figure in blue jeans made his way from the entrance onto the field.

As he got closer to the VIP tent that was set up in north endzone, dozens of former teammates, dignitaries and administrators made their way over to greet he and his son, who had made way down from Martin County.

For the first time in many decades, Bill Hawkins returned to where his amazing football career began. On this night, Bulldogs – new and old – welcomed back their true native son. Someone who along with Tucker Fredrickson, Travis Daniels and Danny McManus kept this school relevant when talking high school football players who had made a splash at the next level and beyond.

As players from his early 1980’s teams embraced the towering Hawkins, it was a night where the past indeed met the future as principal Patricia Brown and athletic director Boomer Bray, who both made this evening possible, were ready with open arms.

With this evening planned to retire his No. 72 jersey, dozens came out to pay their respects and congratulate a former classmate, teammates and someone who everyone was proud to call “their own”.

Now a successful attorney in Martin County, Hawkins was overwhelmed by the invitation and the outpouring.

“I thought they were kidding when they said they wanted to retire my jersey,” he said with a smile. “Much of what I am today started on this football field and in this City.”

While the Bulldogs almost didn’t get Hawkins, who began at nearby Chaminade High School as a ninth grader, it was the opposite sex that was a factor in making the move to South Broward.

“When I was there and saw the school was all boys, I said no way,” he laughed. “I can’t tell you how much I enjoyed my time here at this school and every teacher and classmate that I came in contact with.”

As former teammates came up to congratulate and say hello to this impressive student/athlete who had the highest-grade point average on the high school team and in college, many shared stories and brought up great memories. As stories were exchanged, halftime arrived, and it was the moment that been a long time in the planning.

Speaking of college, the choice to go to Miami was something he nearly regretted when he was a freshman. He recalls that he almost quit because Jimmy Johnson and the staff worked him like he had never been worked before. But it all worked out.

Hawkins was a 3-year starter for the Hurricanes at defensive end. While he redshirted in 1984, he started to make an impact in 1985 - as a backup he recorded 10 tackles and showcased some amazing skills and learned plenty from some iconic players in front of him.

The very next season, Hawkins’ career was defined as a starter when he finished with 62 tackles (10 for a loss) and 7 sacks. His junior season was also one where scouts in the NFL began to take notice.

It was during his senior year with the Hurricanes that Hawkins earned first and second team All-American honors by various outlets. He finished with 67 tackles (18 for a loss) and 7.5 sacks and earned him a spot as a finalist for the Lombardi Award.

His work on the football field as well as in the classroom had Coach Johnson singing his praises as one of "the most consistent lineman he ever coached."

In his four years at Miami the Hurricanes had a 44-4 win–loss record and Hawkins played in four "New Years' Day" bowl games. The ‘Canes were National Champions after the 1987 season and the victory over Oklahoma.

His collegiate success paved the way for the future – as he was the 21st selection in the 1st round of the 1989 NFL Draft by the Los Angeles Rams.

While injuries got in the way during his professional career, he still impacted his team and teammates and set the table for his career after football.

Today, with a Law Degree from the University of Florida, Hawkins has a “Client First” approach, running his law practice with the client’s best interest in mind. He is indeed a great communicator – on and off the playing field. Hawkins also took advantage of the study abroad program in Montpellier, France studying international financial crimes (with Honors).

He finally got the sport of football out of his system as a two-year defensive line coach at Jupiter High School back in 2010-11.

“Different game than when I played it,” Hawkins said. “But it was fun while it lasted.”

In is served when we have open and frank communication. This allows me to understand their perspective and create a game plan, to make their goals possible”.

Safety Is Paramount For This Saturday’s Linemen Showcase