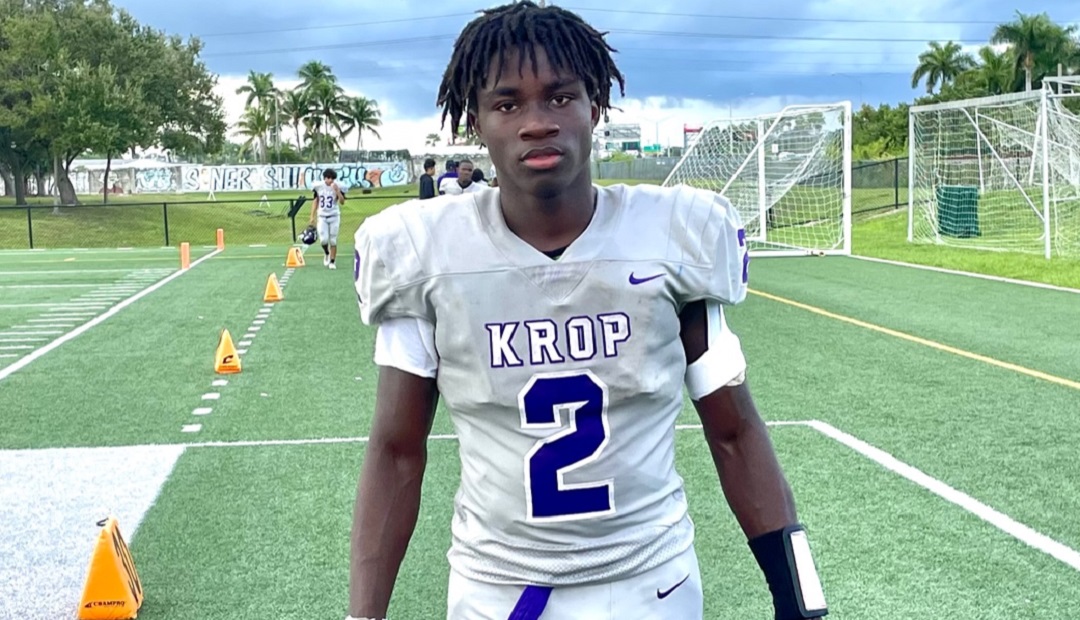 Each and every Wednesday throughout the course of a year, we bring you prospects from Miami-Dade and Broward Counties that deserve the spotlight.

While many are already on the radar for college coaches and fans, there are others that we introduce for the first time from watching live and seeing what they bring to the table from a different perspective.

With many recruiting services and promotional websites getting these standout prospects out from watching film, we have always believed in attending as many practices, combines, camps, 7-on-7 events and games as possible – giving the colleges and those fans who watch high school football a fair assessment on the student/athletes who compete.

While promoting these young men year-round has always been an objective, the colleges and universities have long trusted in the evaluations that we bring them – aside from what we write in these brief paragraphs about football talent in these two counties.

While this particular blog is devoted to Miami-Dade and Broward Counties, our year-round coverage of the entire state of Florida gives us a huge advantage when comparing talent, and while many throw around “the best” when talking about certain standouts, we have more than a valid way of determining how well-rounded these football players are when comparing them to each other.

Today, we have five more football players that we have been fortunate to watch from as close as five feet away:

2024 – Jordan Lyle, RB, 6-0, 190, Fort Lauderdale St. Thomas Aquinas. Every year it seems like the Raiders have a running back that sets the bar higher and higher, and this impressive junior has already established himself as one of the best this storied program has produced. Drawing attention from major colleges nationally, what he brings to the table is something that very few have been able to do. In addition to his running style, he has the size, versatility, and talent to make it to the next level and beyond. Will be one of the best in the country next year as a senior.

TAPE: https://www.hudl.com/profile/15321847/Jordan-Lyle
2023 – Winstanson Mathurin, OL, 6-5, 270, Coconut Creek Monarch. Coming from Coral Springs, here is one of the hidden gems in south Florida. Big, quick, strong and talented are things that college coaches have started to watch – especially during a season when the Knights have done so well. Watch him play and you see someone who dominates and is just scratching the surface. His ability to play either guard or tackle is something that has drawn plenty of attention. Add in the fact that his work in the classroom (4.2 GPA) continues to open doors and you have something very special in this student/athlete!

2024 – Jonathan Morillo, QB, 6-1, 172, Pembroke Pines West Broward. With all the quarterbacks in south Florida getting so much pre-season hype and attention, here is one who received very little of the spotlight but is a gifted young man who has turned out to be one of the best in the entire state in his junior year. He has been among the top 10 overall passers for the Bobcats as this program continues to grow and build along with amazing sophomore receiver Joshua Moore, who we spotlighted before anyone else had the opportunity to watch him early in the season. Morillo will blow up during the off-season and you can count on that.

2023 – Julius Pascal, RB/FS, 5-11, 175, Miami Dr. Krop. There are so many versatile two-way prospects in south Florida this year, but very few who can do what this young man has done. A three-year starter for the Lightning, he is regarded as one of the top running backs, where he went over 1,000 yards and scored 12 times, as well as a defensive back who can play three positions and create positives with four interceptions – one for a game-changing touchdown. Solid talent that college coaches continue to watch.

2024 – Amare Sanders, CB/WR, Miami Gulliver Prep. Like Gabe Taylor, who is currently at Rice University and was a one year football standout for the Raiders, here is a gifted prospect who made a name for himself on the basketball court before showcasing his many skills. While following in the footsteps of his older brother, Tony Sanders (6-7) who is a basketball standout at Notre Dame University, many who follow this game feel that his future on the football field is already being carved out. After watching him twice this season, this is someone who has a chance to blow up in the off-season and head into his final year next season as one of the elite prospects. Remember his name because he is truly a gifted athlete in many arenas.

SPRING FOCUS – Slowing Down Cardinal Gibbons Will Not Be Easy