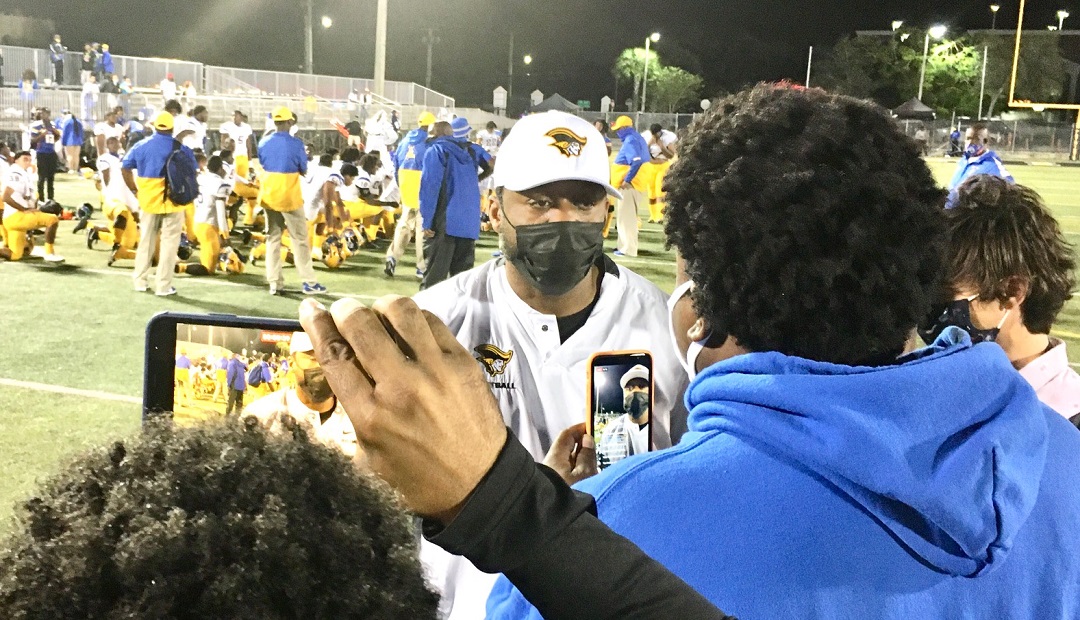 With all the opting in or opting out of the state playoffs, the one thing that was a certain last Friday, the game between Miami Northwestern and Plantation American Heritage was as certain as we will all eat a lot this Thursday for Thanksgiving dinner.

If you doubt it, ask Patriots’ head coach Pat Surtain. He was the one who pointed out in his post-game talk with his team after they knocked off the three-time defending state champs.

“When we lost to that team last year in this game, I told you all to remember that feeling,” he said. “We never forgot how we came up short and didn’t realize our dream. We wanted to make sure that didn’t happen this year.”

The 12-3 decision put the 6-2 Patriots into the third round of the state playoffs – this Friday at once beaten Rockledge.

Going into last Friday’s game, most felt it would be defensive. One because the Patriots had been without starting quarterback Blake Murphy – injured over a month ago. He returned in time to help add balance.

Sophomore standout Mark Fletcher Jr. has been coming up big for the offense this season – as he showcases the skills that made him so special at the youth level as well.

But no matter how you slice it, the defense has been amazing – even losing to 3A power Jacksonville Trinity Christian (3-0) and national power St. Thomas Aquinas (33-23).

Sophomores Belizaire Bassette II, Richard Thomas and defensive end Marvin Jones Jr. have been lights out all season. So has senior Josh Hartman. They have all come up with huge plays.

Junior linebacker Jaeden Kinlock and sophomore David Vadala have been among the top tackle leaders the past two seasons.

The secondary may be as good as you get. University of Miami-bound senior safety James Williams is one of the nation’s best. Boogsie Silvera and Brian Blades are also major contributors.

Underclassmen such as juniors Earl Little Jr. and Jacolby Spells are solid. So are sophomores Damari Brown and Daemon Fagan.

WHAT HAPPENED TO THE BULLS OFFENSE?

Northwestern’s lack of offense had been a mystery. Huge line, big time receivers, a quarterback who led the Bulls to a state title as a freshman – and a running game with a trio of backs (Siddiq Jackson, Zuberi Mobley and DeShawn Trowers) who were as productive as any.

The Bulls made mistakes. They always make them, but against a quality defensive team and a lack of offense, they failed to score a touchdown for the first time in four years.

While a lot of the football eyes will be on south Florida the next few weeks for the Tri-County Championships, we are also reminded that we still have a few teams that did opt in to take part in this year “FHSAA State Playoffs”.

8A – PALMETTO HAS BECOME ROAD WARRIORS

Defense was once again the name of the game for Miami Palmetto on the road in Orlando as the Panthers (3-1) beat high-scoring Lake Nona, 9-6.

The stage will get bigger when head coach Mike Manasco and his team heads to Port St. Lucie to play unbeaten (10-0) Treasure Coast on Friday.

Head Coach Roger Harriott and his Raiders rolled over Lehigh 50-14, moving to 4-1.

Since losing to Cardinal Gibbons, they have outscored the three opponents, 114-44.

They will now stay on the road to play at 9-1 Bradenton Manatee.

With nearly a month off from the first full game they played, head coach Roland Smith and the Rockets rolled over Naples Lely, 42-16, setting up this week’s showdown at 7-1 Naples, who have won seven straight this season, but have fared poorly against Miami-Dade County teams in the playoffs.

It may be time to recognize head coach Matt Dubuc and his 5-1 Chiefs as one of the best teams in south Florida.

A veteran team with enough youth to make things happen – and they did with 4A favorite Miami Gulliver Prep last Friday at FIU in Miami.

A 29-7 win against the Raiders sets up this week’s game against 4-3 Delray American Heritage.

3A CHAMINADE & EDISON HAVE TUNE-UPS

When Luther Campbell took over the Miami Edison program last year, Chaminade-Madonna was certainly the team this program wanted. Well, they have them.

Losing out on the chance last year, the 3-1 Red Raiders will have that opportunity this Friday – after beating St. John Paul II, 41-0.

Since “losing” to Central 14-0 in a game that lasted a half, the Red Raiders have outscored the three opponents – two in the playoffs – 162-21.

For head coach Dameon Jones and his three-time defending state champs, who come in 6-1, things are starting to come together on the offensive side of the ball. We all know that the Lions are easily as good as any defense in south Florida.

It’s been another productive season for head coach Hector Clavijo and his defending 2A state champion Lions as they dropped games to only Chaminade-Madonna and 4A power TRU Prep Academy.